Goldman Sachs Is Manipulating Gold Prices Right Before Your Eyes 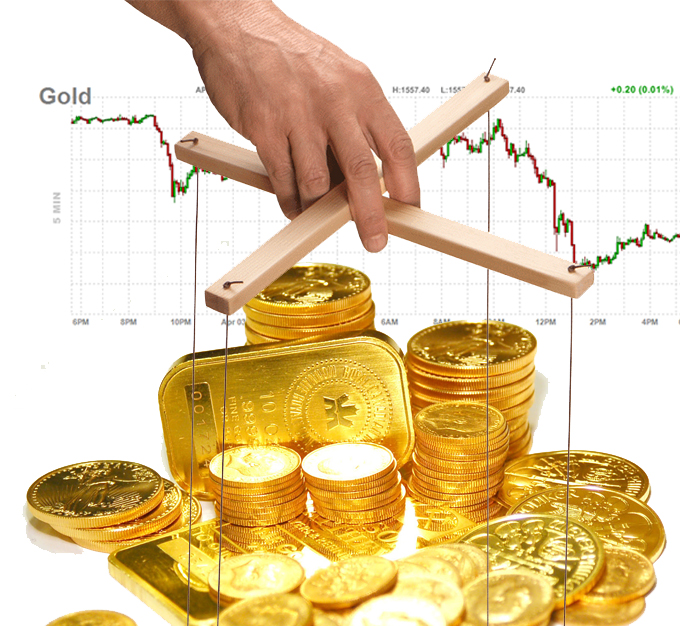 If you want a lesson on how to manipulate gold prices, you need only look at what Goldman Sachs Group Inc. has been doing over the past few months.

Goldman set the table by predicting a turn in gold prices back in December 2012, which no doubt contributed to the precious metal's 5% decline in the first two months of the year.

Then, just yesterday (Wednesday), Goldman doubled down on its negative outlook for gold prices.

The double whammy – two downgrades in two months – had its intended effect, as gold prices fell 2%, to $1,558.80, after Goldman released its report. It was the biggest single-day percentage drop for gold in nearly six months.

"If you've ever suspected gold prices are being manipulated, you're not alone – and you're right, they are," said Money Morning Chief Investment Strategist Keith Fitz-Gerald.

The proof is right in front of us.

How Goldman Uses its Forecasts to Manipulate Gold Prices

In addition to the lower targets, Goldman's reports spell out why the bank thinks gold prices will decline, which are at least as important in the price manipulation strategy as the targets themselves.

Here's what Goldman said in its February report:

"The decline in prices since last fall and our updated forecast [emphasis ours] suggests that the turn in the gold price cycle is likely already underway. As a result, although our U.S. economic forecasts point to modest near-term upside to gold prices, we believe that a sharp recovery in prices to our previous price forecast is unlikely."

Goldman brazenly cites its own forecast as part of the evidence that the downward move in gold prices is happening. In other words, they're practically bragging about their manipulation of gold prices.

Then Goldman applies a Jedi mind-control technique to remedy the inherent contradiction in its forecasts for the U.S. economy and its targets for gold prices: "These are not the forecasts you are looking for."

"Despite resurgence in euro-area risk aversion and disappointing U.S. economic data, gold prices are unchanged over the past month, highlighting how conviction in holding gold is quickly waning," Goldman said in its research note.

The purpose behind all this, Fitz-Gerald explained, is to "get the weak money out, so they can accumulate more gold themselves."

In fact, this is a widely used Wall Street strategy that dates back at least to the 1920s.

For that matter, there's plenty of evidence Goldman uses this strategy to manipulate stocks and other commodities all the time.

Here's how it's done.

Often, the big banks are making subtle trades to help push the commodity – be it gold, a stock or anything else in the markets – in the direction they want it to go.

Issuing reports helps the cause by getting the media to transmit and amplify the message manipulators like Goldman are trying to send.

"Bigger firms like JPMorgan, Goldman Sachs, PIMCO or any of a dozen other behemoths simply release a "research report' that is interpreted as gospel by the mainstream media and swallowed hook, line and sinker by millions of unsuspecting investors as a reason to buy or sell," Fitz-Gerald said.

For example, the MarketWatch headline on its story about yesterday's Goldman downgrades of gold prices proclaimed, "Another blow to gold – Goldman Sachs slashes 2013, 2014 forecast."

That story noted that Deutsche Bank also had lowered its forecast for gold prices just the day before.

In short, investors need to pay close attention to what the big banks say about stocks andcommodities, because very often they are betting in the opposite direction. If you fall for the misinformation, you'll end up on the wrong side of the trade – losing money while Wall Street operators like Goldman reap the big profits.

How to Deal With the Market Manipulators

Fitz-Gerald advised investors not to get frustrated and angry about Wall Street manipulation of stocks and gold prices, but rather to try to understand what's going on and use it for their own benefit.

"Do what Wall Street does, not what it says," Fitz-Gerald said.

That's not as hard as one might think, he said, noting that retail investors don't have the pressure to move around large amounts of money every day and don't need to worry about major moves that could tip off their strategies to other big competitors.

"You can use tactics the big boys can't," Fitz-Gerald said.

One thing that retail investors can do to avoid becoming a Wall Street patsy, he said, is to dollar-cost average (buy a set dollar amount of an investment at regular intervals) into things like gold and stocks.