In the autumn of 834 AD, two elderly women were buried together in the magnificent Oseberg ship discovered in 1903 nearby Tønsberg in Vestfold, Southeast Norway. Ever since the ship was excavated in 1904-1905, there are put forward many theories about who these women were. The objects they took with them may give us the answer to this “insoluble” Viking Age mystery.

The very well preserved and beautifully ornamented Viking ship was built around the year 820 AD. It is 21.5 meters long and 5 meters wide with room for 30 oarsmen, and was pulled ashore and used as grave ship for the two women. 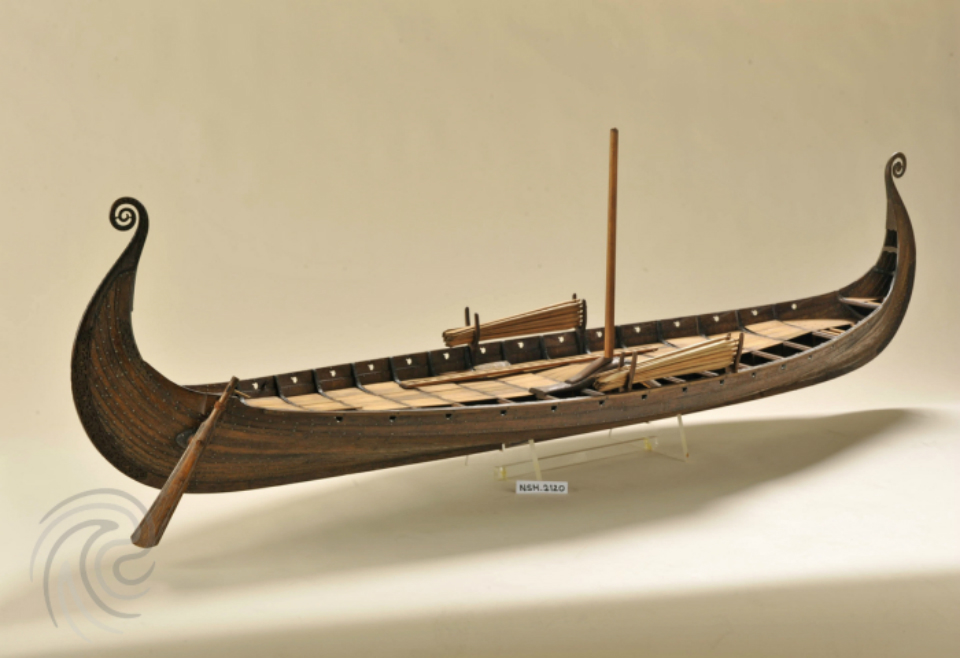 The oars found in the Oseberg ship showed no signs of use. Was the ship custom-built as an exclusive “coffin” ordered by the two women in the grave? (Photo: Digitalmuseum.no)

Right at the mast there was built a burial chamber. Inside, the walls were decorated with a wonderful woven tapestry, and the dead women were placed together in a made bed. The grave contained hundreds of items for both everyday use and solemn occasions.

Investigations of the skeletons show that the elder of the two woman was between 70 and 80 years of age when she died. She probably died of cancer, was overweight and in her belt she was carrying a leather purse containing cannabis seeds.

The use is uncertain, but some believe she used cannabis for pain relief while others think the seeds were used to grow hemp for making ropes.

The other woman was younger, but still between 50 and 55 years old. Scientists do not know what she died of. Both of the women passed away at a very high age considering the fact that they were living in the Viking Age where the normal life expectancy for women was about 39 years. 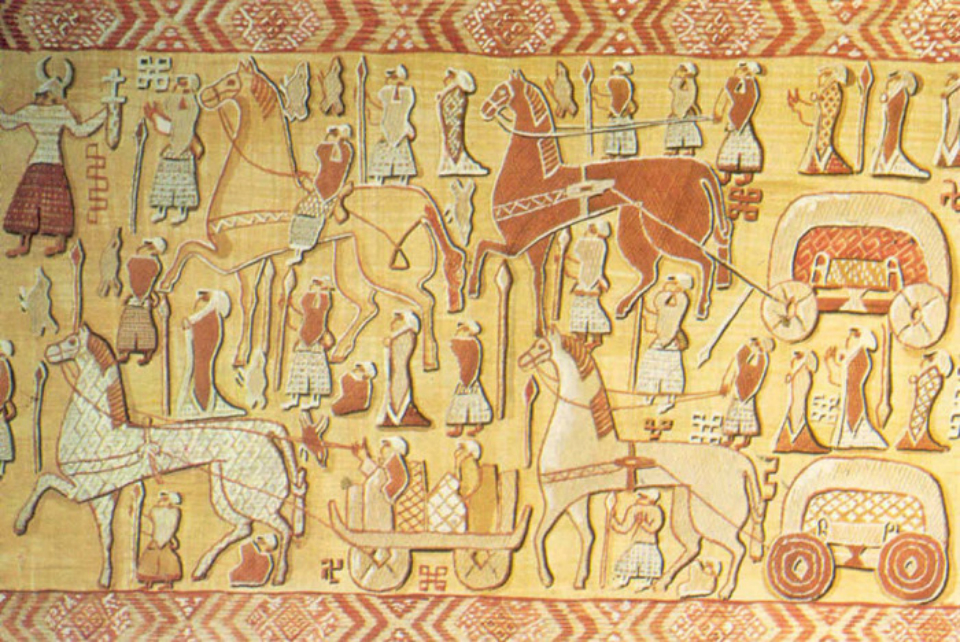 This embroidered tapestry from the Oseberg burial probably portrays a religious procession. (Photo: Museum of Cultural History, University of Oslo)

Analyzes of the younger woman’s teeth show that she did use a metal toothpick, a luxury article in the 9th century.

The older woman wore a very fine red wool dress with a lozenge twill pattern and a white linen veil in a gauze weave, while the other wore a simpler blue woolen dress with a wool veil.

Both women’s diet was mainly meat-based, and luxury when most Vikings ate fish.

However, there was not enough DNA to tell if the women were related.

There is put forward many different theories about who these women were.

Some researchers believe the oldest woman was a powerful queen or a queen mother who brought a slave with her, possibly a relative, to the Afterlife. If this is correct, the woman is not mentioned in any of the sagas including Snorri’s Heimskringla, the best known of the Old Norse kings’ sagas.

This may be because Snorri wrote down the Heimskringla about 400 years after the two women passed away and Catholicism was the official religion. The Roman Catholic Church had almost unlimited power and influential women who followed pagan beliefs, got no place in contemporary literature.

Others believe the elder woman may have been an influential person who made a fortune by financing Viking raids from Vestfold to the British Isles and mainland Europe.

Women in the Viking Age had allodial rights and a strong position in society, and it is likely that they also had the opportunity to involve in politics and trade.

Another theory is that the oldest of the woman was a Norse religious leader, a völva (English: priestess, shaman) who took with her one of her closest helpers to accompany her in her travel to Valhalla.

Hundreds of objects joined the two women on their journey, and here might the answer to the unsolvable mystery lie.

Maybe one of the women was a queen or queen mother, or a trade woman with political influence, – or a priestess with great power in Vestfold?

Alternatively, could the answer be something completely different? Moreover, it is not obvious that it was the oldest of the women who was the more influential of the two.

By studying a selection of objects found in the Oseberg burial mound, you can make up your own mind:

The Oseberg ship with oars, ropes, rigging equipment, remnants of a sail, one bailer, one anchor. 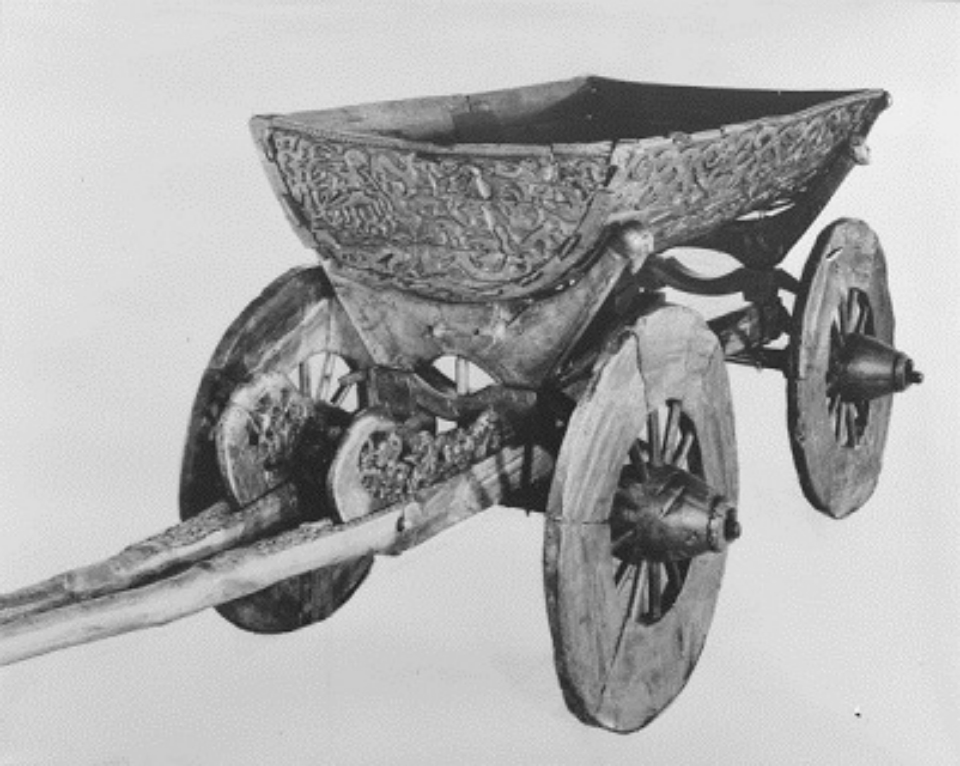 Was the Oseberg cart working as a landing vessel carrying the two women when the ship arrived in Valhalla? (Photo: Museum of Cultural History, University of Oslo)

The many beautiful and colorful fabrics found are unique due to the extremely good storage conditions in the Oseberg burial mound:

Eighteen shovels (some may have belonged to the grave robbers), one dung fork, two whetstones, two awls, five stretchers.

Many iron dog chains, fittings for many dog collars.