'Greece is on the edge of catastrophe. There will be riots and chaos': French central bank boss warns of dire consequences if the country does not make a deal this week 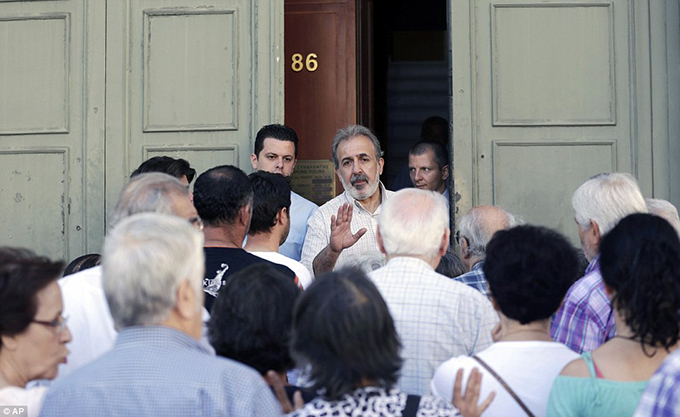 Greece today submitted a request for aid from Europe's bailout fund and is rushing to detail a plan of economic reforms that creditors want to see this week if they are to save the country from financial collapse and keep it in Europe's joint currency.

All 28 European Union leaders will then examine the plans on Sunday in a make-or-break summit that will either rescue Greece's moribund economy, or leave it to crash out of the single currency - a so-called 'Grexit'.
Greece today submitted a request for aid from Europe's bailout fund and is rushing to detail a plan of economic reforms that creditors want to see this week if they are to save the country from financial collapse and keep it in Europe's joint currency.

All 28 European Union leaders will then examine the plans on Sunday in a make-or-break summit that will either rescue Greece's moribund economy, or leave it to crash out of the single currency - a so-called 'Grexit'.

Speaking on French radio this morning, Noyer said: 'The Greek economy is on the edge of catastrophe. A deal absolutely must be found on Sunday because it will be too late after that and the consequences will be serious.'

If a deal isn't struck 'there could be riots... and chaos in the country,' he added.

Greek banks remain closed for a second week, with ATM withdrawals limited to €60 a day. It is believed that creditors may demand that that figure is reduced still further to just $20 as part of the bailout package.

Noyer said it was 'impossible' to re-open the banks while confidence was so low because there would be an 'immediate run' on tellers.

'Although difficult, an agreement is still possible and more necessary than ever. Grexit would be a terrible failure, a collective mistake and we are fighting to avoid it.'

Asked whether if Greece leaves the eurozone other countries will struggle to keep it together, Moscovici said: 'I'm not talking about that.'

'The Greek government has come with goodwill, the dialogue has started again and we are waiting for a comprehensive, credible set of reforms.'

'When they come we will consider them as we have until Sunday.'

Tsipras earned both cheers and jeers as he told politicians at the European Parliament that his country is seeking a deal that will mean a definitive end to his country's financial crisis, not just a temporary stop-gap.

He said Greece's proposals, which European officials have said must be finalised and submitted by Thursday, aim to address the country's problems beyond the immediate financing requirements.

'The proposals we have made to our partners are ones that involve credible reforms with an acceptable degree of burden-sharing, which will not bring recessionary effects with it.

'We need to ensure the medium-term funding of our country with a development and growth programme,' Mr Tsipras told the politicians gathered in Strasbourg, France.

Greece this morning submitted a written request for a new support programme from Europe's bailout fund, according to Michel Reijns, the spokesman for the eurozone's top official, Jeroen Dijsselbloem.

Greece needs to back that up by presenting by the end of Thursday a detailed, cost-assessed plan on the economic measures it would take in exchange for loans. So far, Greece has only produced an outline of the measures.

European leaders will hold a summit on Sunday to decide whether the plan is good enough. 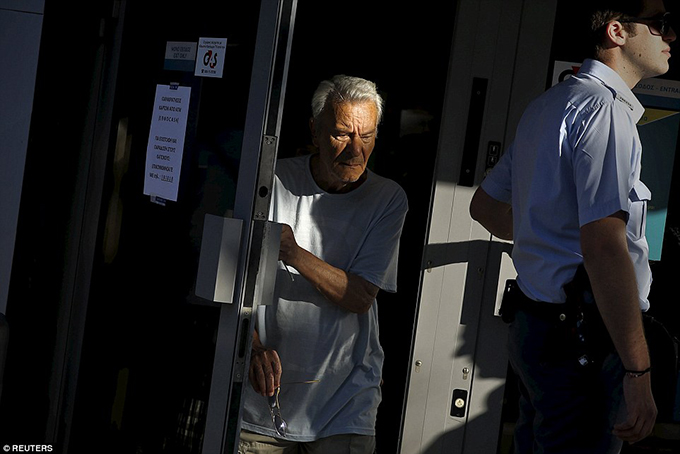 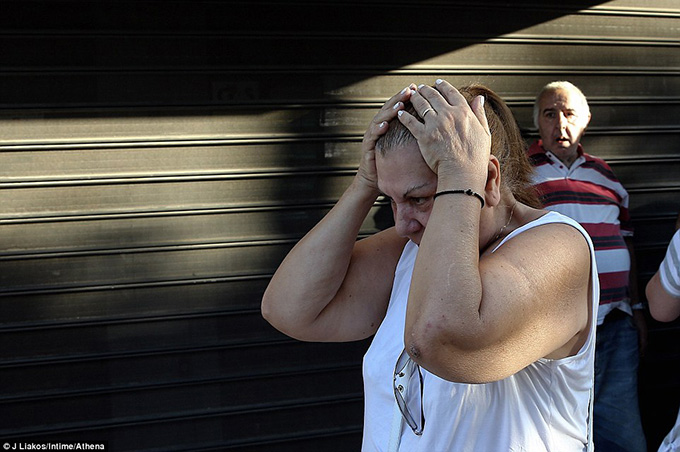 Despair: A woman holds her head in her hands outside a National Bank of Greece branch in Kallithea 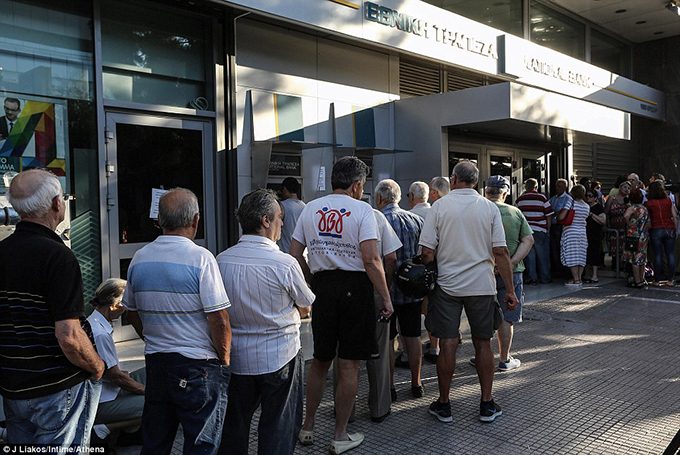 Applause rose from leftist quarters when he said aid to Greece only helped out banks, not ordinary Greeks. A few called for compromise.

The head of a conservative group in the Parliament, Belgium's Guy Verhofstadt, said he was 'furious' at Mr Tsipras's failure to spell out specifics of his reform plans.

Ukip leader Nigel Farage told Mr Tsipras: 'Your country ... should have never joined the euro' and urged him to quit the common currency. Britain is not part of the euro.

The political talks come at a time of capital controls in Greece, with the country's banks shut since last week, Greeks limited to withdrawals of 60 euros per day and unable to send money abroad, including the payment of supplies or bills, without special permission.

In his speech to the European Parliament, Mr Tsipras aid Greece's troubles date to long before he took office five months ago

He described Greece as having been used as an 'austerity experiment' for the last five years of bailout reforms imposed on the country that led to spiralling unemployment and poverty, and a contraction of the economy by a quarter.

The experiment with austerity, Tsipras said, had clearly failed.

'We demand an agreement with our neighbours, but one that gives us a sign that we are on a long-lasting basis exiting from the crisis - which will demonstrate to us that there is light at the end of the tunnel. An agreement which will bring about the credible and necessary reforms,' he said.

'But let us not forget that in the last five years, the Greek people have made a tremendous effort for adjustment - a very difficult and hard process of adjustment. This has exhausted the patience and resilience of the Greek people.'

The Greek crisis has frayed the nerves of other European leaders, who have accused the Greek government, elected in January on promises to repeal austerity, of foot-dragging and exacerbating the situation.

'We have a Grexit scenario, prepared in detail,' he said, apparently referring to the situation in which Greece would be forced out of the currency union.

Greece's eurozone partners have steadfastly said they want to help Greece stay in the currency club but have just as often complained about Greece dragging its feet during months of negotiations.

One big sticking point in the talks is Greece's demand that the terms of its bailout loans be made easier.