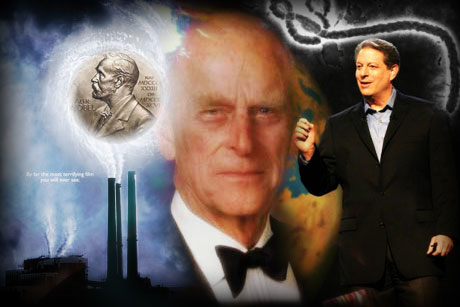 Many of us recall that worried warning from the nervous rabbit, or the later Chicken Little version, in the stories from our youth. That same message is being sounded again by the likes of Al Gore with his movie "An Inconvenient Truth."

The movie purportedly shows the ecological and environmental damages being done to our planet by us humans. Gore has now won the Nobel Peace Prize.

Dare to differ
Some, however, would dare to differ with the former vice president on shrinking Himalayan glaciers, the snowcap on Mt. Kilimanjaro, the expanding African desert and the meltdown of the Greenland and Antarctic ice sheets.

Many of them are learned people, such as James Taylor, senior fellow for environment policy at the Heartland Institute, who claims Gore distorts science and ignores data that defies his theory of global warming. So, what's up? This is the same guy who supposedly invented the Internet a few years back.

Some environmentalists, such as Britain's Prince Phillip, formerly the president of the World Wildlife Fund, are showing us the hidden hand behind the eco-environmental movement.

When asked what he would be were he to be reincarnated, he said he would wish to return as "a killer virus to lower human population levels." Unfortunately, as a longtime proponent of population control, he was not kidding.

To find out about the "Greens," we have to pay attention to what those who purport to be its leaders are saying. Does this movement to save the planet have another, darker agenda such as population control?

Everyone wants clean air and water. Everyone is for not trashing our planet. Not everyone, however, is of the extreme opinion that in order to accomplish these things, we must drastically reduce human population levels.

Cornerstone
Mikhail Gorbachev, former Russian president, founder of the Gorbachev Foundation and head of Green Cross International, claims the environment crisis is the cornerstone of the new world order. He is also co-author, along with Steven Rockefeller, of the United Nations Earth Charter.

The Earth Charter is a kind of environmental Ten Commandments intended to become a universally adopted creed that will prepare the world's children to accept the necessity of world government to save the planet.

At Gorbachev's State of the World Forum in 1995, philosopher and author Sam Keen told the gathering elites that the ecological crisis is the population crisis, while urging them to promote sexuality, contraception and abortion.

He further suggested, "Cut the population by 90 percent and there aren't enough people left to do a great deal of ecological damage. Scary, isn't it? And who decides on the 10 percent who get to stay?

Consider oceanographer Jacques Costeau's article in a United Nations 1991 UNESCO Courier, whereby he called for the elimination of 350,000 people per day in order to "stabilize world population." These people are serious. What lengths will they go to in order to accomplish their goal?

Experts publishing dissenting views to global warming and the facts verifying their views get no media attention. Paul Erhlich's hysterical "Population Bomb" was a success in sales but a failure with the crystal ball. His predictions of global famine and millions of starving people were all wrong. Yet, his way of solving all these ills was all too familiar -- "population control is the answer."

Joseph D'Alea, director of meteorology for the Weather Channel, claims that "we are responsible for just .001 percent of this atmosphere." If the atmosphere was a 100-story building, our anthropogenic (generated by man) CO2 contribution today would be equivalent to the linoleum on the first floor.

Straight talk
We get some straight talk from S. Fred Singer, a climate physicist, who co-wrote the book "Unstoppable Global Warming: Every 1500 Years." In it he writes "We've had greenhouse theory with no evidence to support it -- except for a moderate warming turned into a scare by computer models whose results have never been verified with real world events."

Samantha Smith, author of the 1993 book "Goddess Earth," writes that world socialism is the primary goal of the environmental movement and to achieve it, "independent Americans have to be scared, as well as shamed into conforming to an international agenda calling for Earth stewardship, simple lifestyle and the redistribution of the world's wealth."

Look closely behind the environmental scare and at things like war, famine, abortion and euthanasia. Are your children being schooled on the Earth Charter?

Is the sky really falling? Is global warming "an inconvenient truth" or a convenient lie and the newest version of Chicken Little readying us for a Godless "new world order?"