Has Anyone Read the Copenhagen Agreement? 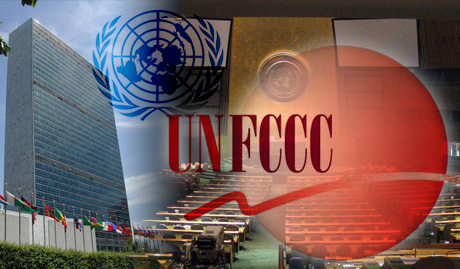 U.N. plans for a new 'government' are scary

We can only hope that world leaders will do nothing more than enjoy a pleasant bicycle ride around the charming streets of Copenhagen come December. For if they actually manage to wring out an agreement based on the current draft text of the Copenhagen climate-change treaty, the world is in for some nasty surprises. Draft text, you say? If you haven't heard about it, that's because none of our otherwise talkative political leaders have bothered to tell us what the drafters have already cobbled together for leaders to consider. And neither have the media.

Enter Lord Christopher Monckton. The former adviser to Margaret Thatcher gave an address at Bethel University in St. Paul, Minnesota, earlier this month that made quite a splash. For the first time, the public heard about the 181 pages, dated Sept. 15, that comprise the United Nations Framework Convention on Climate Change—a rough draft of what could be signed come December.

So far there have been more than a million hits on the YouTube post of his address. It deserves millions more because Lord Monckton warns that the aim of the Copenhagen draft treaty is to set up a transnational "government" on a scale the world has never before seen.

The "scheme for the new institutional arrangement under the Convention" that starts on page 18 contains the provision for a "government." The aim is to give a new as yet unnamed U.N. body the power to directly intervene in the financial, economic, tax and environmental affairs of all the nations that sign the Copenhagen treaty.

The reason for the power grab is clear enough: Clause after complicated clause of the draft treaty requires developed countries to pay an "adaptation debt" to developing countries to supposedly support climate change mitigation. Clause 33 on page 39 says that "by 2020 the scale of financial flows to support adaptation in developing countries must be [at least $67 billion] or [in the range of $70 billion to $140 billion per year]."

And how will developed countries be slugged to provide for this financial flow to the developing world? The draft text sets out various alternatives, including option seven on page 135, which provides for "a [global] levy of 2 per cent on international financial market [monetary] transactions to Annex I Parties." Annex 1 countries are industrialized countries, which include among others the U.S., Australia, Britain and Canada.

To be sure, countries that sign international treaties always cede powers to a U.N. body responsible for implementing treaty obligations. But the difference is that this treaty appears to have been subject to unusual attempts to conceal its convoluted contents. And apart from the difficulty of trying to decipher the U.N. verbiage, there are plenty of draft clauses described as "alternatives" and "options" that should raise the ire of free and democratic countries concerned about preserving their sovereignty.

Lord Monckton himself only became aware of the extraordinary powers to be vested in this new world government when a friend found an obscure U.N. Web site and searched through several layers of hyperlinks before discovering a document that isn't even called the draft "treaty." Instead, it's labelled a "Note by the Secretariat."

Interviewed by broadcaster Alan Jones on Sydney radio Monday, Lord Monckton said "this is the first time I've ever seen any transnational treaty referring to a new body to be set up under that treaty as a 'government.' But it's the powers that are going to be given to this entirely unelected government that are so frightening." He added: "The sheer ambition of this new world government is enormous right from the start—that's even before it starts accreting powers to itself in the way that these entities inevitably always do."

Critics have admonished Lord Monckton for his colorful language. He has certainly been vigorous. In his exposé of the draft Copenhagen treaty in St. Paul, he warned Americans that "in the next few weeks, unless you stop it, your president will sign your freedom, your democracy and your prosperity away forever." Yet his critics fail to deal with the substance of what he says.

Ask yourself this question: Given that our political leaders spend hundreds of hours talking about climate change and the need for a global consensus in Copenhagen, why have none of them talked openly about the details of this draft climate-change treaty? After all, the final treaty will bind signatories for years to come. What exactly are they hiding? Thanks to Lord Monckton we now know something of their plans.

Janos Pasztor, director of the Secretary-General's Climate Change Support Team, told reporters in New York Monday that with the U.S. Congress yet to pass a climate-change bill, a global climate-change treaty is now an unlikely outcome in Copenhagen. Let's hope he is right. And thank you, America.

Comment: Please note that "Lord" Monckton is a member of the Worshipful Company of Broderers, an Officer of the Order of St. John of Jerusalem, a Knight of Honour and Devotion of the Sovereign Military Order of Malta, and a member of the Roman Catholic Mass Media Commission. Read more

On October 14, Lord Christopher Monckton, a noted climate change skeptic, gave a presentation at Bethel University in St. Paul, MN. In this 4 minute excerpt from his speech, he issues a dire warning to all Americans regarding the United Nations Climate Change Treaty, scheduled to be signed in Copenhagen in December 2009. A draft of the petition can be read here: pdf

Lord Monckton served as a policy adviser to Margaret Thatcher. He has repeatedly challenged Al Gore to a debate to which Gore has refused. Monckton sued to stop Gore's film "An Inconvenient Truth" from being shown in British schools due to its inaccuracies. The judge found in-favor of Monckton, ordering 9 serious errors in the film to be corrected. Lord Monckton travels internationally in an attempt to educating the public about the myth of global warming.