Editor’s note: It is hard to believe that the emergency civil defence system that relayed mobile phone messages to Hawaii’s populace was triggered accidentally. The texts that warned of an imminent ballistic missile attack were accompanied by blaring sirens from the island’s military bases, which caused widespread panic. It is our contention that this was a contrived event meant to foster fear amongst American citizens and justify the escalation of the United States’ military stance vis-à-vis North Korea. Mundilfury.

The false alert of a ballistic missile attack that unleashed panic across Hawaii on Saturday morning was triggered when a state employee accidentally hit the wrong button on a computer, a state official said.

Hawaii residents received an alert at 8:07 a.m. local time that read “BALLISTIC MISSILE THREAT INBOUND TO HAWAII. SEEK IMMEDIATE SHELTER. THIS IS NOT A DRILL.” 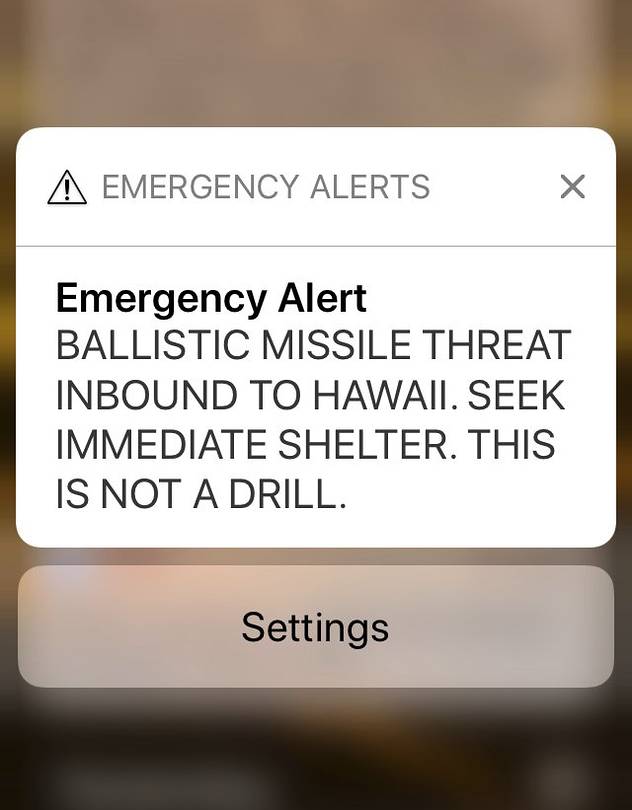 Richard Rapoza, a spokesman for the Hawaii Emergency Management Agency, said in an interview that the alert was mistakenly sent during a morning shift change because “somebody clicked on the wrong thing on the computer and sent out the message.”

The alert was immediately canceled, Mr. Rapoza said, which explains, at least in part, why some residents received the alerts while others didn’t.

At 8:45 a.m., a second message followed, saying, “There is no missile threat or danger to the state of Hawaii. Repeat false alarm.” The second message wasn’t in all capital letters. 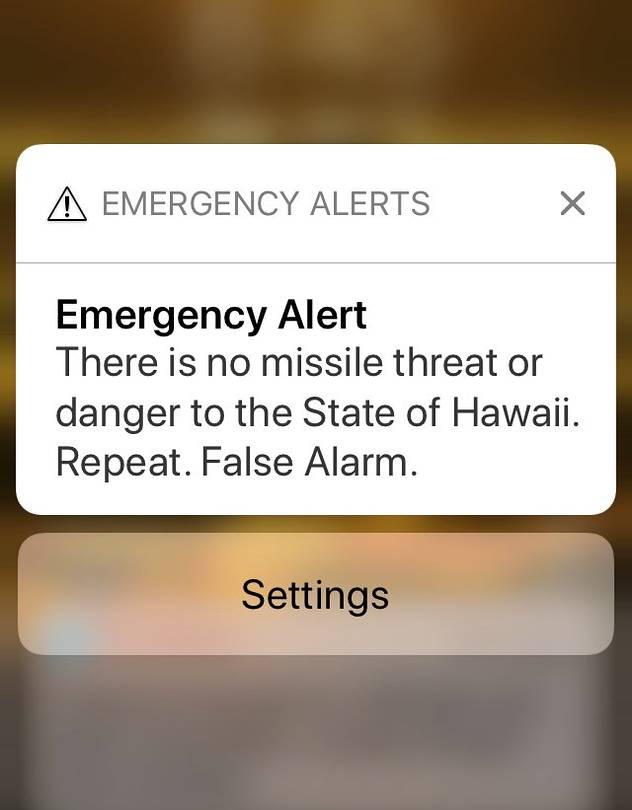 In addition to the mobile alerts, sirens sounded, Hawaii residents said. But Mr. Rapoza said the sirens are triggered by a separate system and never went off, except on military bases.

The system for sending out emergency alerts has now been changed to a two-step system, so the same kind of mistake can’t happen again, he said.

“We know this was a serious mistake,” Mr. Rapoza said. “We’re doing everything we can to reassure the public that it will not happen again.”

The message caused immediate alarm among residents. Some have warned the state could be a target of an attack against the U.S. by North Korea, given the Hawaiian islands’ location in the Pacific Ocean.

Kim Quintano’s husband woke her up after seeing the alert on his phone.

The two Honolulu residents live on the fifth floor of a high-rise building. Her husband searched online and found a tweet from Hawaii Rep. Tulsi Gabbard, a Democrat, saying it was a false alarm.

“I can’t get over that it took them 40 minutes to send another phone alert to tell people there was no missile,” said Ms. Quintano, 37 years old, worried about people who didn’t have access to Twitter. “How many heart attacks were caused by that?”

Lawmakers in Hawaii were quick to call for fixes to the system.

“What happened today is totally inexcusable,” Sen. Brian Schatz (D., Hawaii) wrote on his Twitter account. “The whole state was terrified. There needs to be tough and quick accountability and a fixed process.”

Sen. Mazie Hirono, also a Democrat, tweeted, “At a time of heightened tensions, we need to make sure all information released to the community is accurate. We need to get to the bottom of what happened and make sure it never happens again.”

Deputy White House press secretary Lindsay Walters issued a statement after the false alarm which said President Donald Trump had been briefed on the matter, adding that “This was purely a state exercise.”

Nate Bingham, owner of Hawaiian Style Rentals and Sales near the beach in Waikiki, said he got the alert as he was pulling scooters and bikes out to start the day.

“We all got the same alert at the same time,” he said. “We basically left everything as it was, threw the keys to the scooter in the shop and locked everything up.”

Mr. Bingham purchased a few bottles of water at a local convenience store and drove home to see his wife. By the time he arrived, the false alarm message arrived. He headed back to work, where he was greeted with a line of people hoping to rent scooters and bicycles.

“People are just going back on with their vacation,” he said. “I have this pit in my stomach, still but life is just going on.”

U.S. military officials based in Hawaii were puzzled when they saw the state alert but didn’t hear the air-raid sirens that would be expected if a missile was incoming, one defense official said, and the U.S. Pacific Command saw no evidence of a missile. Still, some personnel took shelter until the matter was cleared up, the official said.

Michael Barstis of Oahu was reading a Scooby-Doo book with his two children in their bedroom when his wife appeared at the door, a concerned look on her face. “Honey, there is a thunderstorm warning,” she said, handing over her blaring cellphone. “We need to take shelter.”

Mr. Barstis froze when he read the text of the alert—a missile was headed their way—and quickly caught onto his wife’s act. They didn’t want to scare the children. Pretending they were getting ready for a storm, he shuttled his family around the house, closing doors and windows. Mr. Barstis wondered if the precautions would even matter—the walls on his house are less than an inch thick.

Then the family dove behind a couch in the living room and waited, possibly for the unimaginable.

“We just sat there silently praying, hugging and kissing our kids,” said Mr. Barstis, 42, the general manager of a construction company. “The island is so small, that if there was a missile, there is no real way to escape it. So I was just happy to be with my family.”

After about 15 minutes of texting and scanning the web for information, his wife reached a friend in the missile defense industry. “We were told it was a hoax,” Mr. Barstis said.

Another 20 minutes passed before an official all-clear was sounded. “Somebody needs to be held accountable for this,” Mr. Barstis said. “The next time, if there is a real threat, we can’t have the boy who cried wolf. They need to explain to the people what happened.”

The alerts also caused panic in Maui, where Betsy Scuteri, of San Diego, was vacationing with her family at a hotel in Kaanapali Beach. An intercom message at the hotel told guests to stay indoors.

“We got away from the windows and crouched down,” Ms. Scuteri said. “My 6-year-old was crying and praying, and my 4-year-old kept asking, ‘What is a missile?’”

Ms. Scuteri couldn’t find information online at first and worried when she heard that it takes 12 minutes for a missile to reach Hawaii from North Korea. An announcement over the hotel’s intercom said, “We’ll know what happens in the next 10 minutes,” which only caused more fear.

The alerts gave Wendy Elsasser, 66, of Princeville, on the island of Kauai, flashbacks to the Sept. 11, 2001, attacks. Still shaken several hours after the alert, she said she spent the minutes between receiving the first and second message “thinking that these were my last minutes on earth.”

Ms. Elsasser was in an exercise class when the teacher’s phone went off. “We all just got up and not thinking we just ran out of there. We all got in our cars; there wasn’t much said,” she said. She ended up at home with a friend and the friend’s dog, waiting and worrying about her husband who was on the golf course.

The building U.S. tension with North Korea has prompted Hawaii to bring back an attack-warning siren that was discontinued in the 1980s. The system also includes mobile alerts and more sophisticated systems than were used previously.

The state has set up tones to be blasted from about 400 sirens that were installed during World War II and are different from those the state uses for tsunami and hurricane warnings.

The state has also aired TV ads warning locals to “get inside, stay inside” if an attack happens.

The mix-up comes amid a broader discussion of emergency alerts in the U.S. The Federal Communications Commission has proposed new standards requiring wireless carriers to narrow the area affected by alerts, in hopes public-safety officials will use the system more.

FCC Chairman Ajit Pai posted on his Twitter account that the FCC would launch a “full investigation” into the false emergency alert.