The following description text is from the uploader at YouTube:

The next time you hear the Jews (I’m a Jew!) say that they don’t own Hollywood, listen to them brag about it in their own video! They can’t have it both ways! Incidentally, this is an edited version of this excellent video. The entire video can be purchased from A&E Home Video at Amazon.com or rented from Netflix.com.

Some people have publicly criticized others for "believing" that Jews set up Hollywood and today run it. These people believe it is "anti-semitic" to state this historical fact. They also fight you on this point without any data to back up their argument. Those who criticize have simply not looked at the history of Hollywood nor have they read any of the material or seen any of the documentary films that detail these very simple and straight forward facts.

Please take a look at the video, read the book and see the below article by Joel Stein from LA times for clarity on this issue. Anyone who tries to call you an "anti semite" for referencing this history or stating this fact is an ignoramus that you can conveniently avoid. For those who truly understands Hollywood’s mind control, the massive influence on popular culture and the young, this should be very interested point of study. Understanding the inception and history behind the motion picture industry of America is vital to be able to understnad both why and how it shapes people’s politics, opinion and ideas of the world, society and the self.

According to Indian Bollywood producer Raj "unless you are Jewish, you are nobody in Hollywood:" 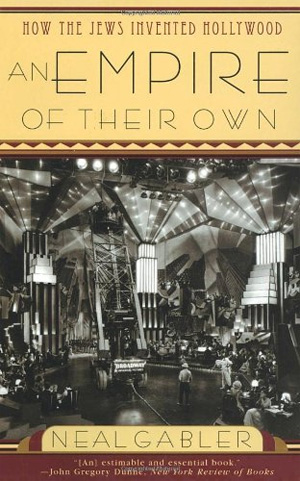 An Empire of Their Own: How the Jews Invented Hollywood

Winner of the Los Angeles Times Book Award for history, this "wonderful history of the golden age of the movie moguls" (Chicago Tribune ) is a provocative, original, and richly entertaining group biography of the Jewish immigrants who were the moving forces behind the creation of America’s motion picture industry.

Wikipedia: An Empire of Their Own: How the Jews Invented Hollywood

An Empire of Their Own: How the Jews Invented Hollywood is a non-fiction book whose topic is the careers of several prominent Jewish movie producers in the early years of Hollywood. Author Neal Gabler focuses on the psychological motivations of these film moguls, arguing that their background as Jewish immigrants from Eastern Europe shaped their careers and influenced the movies they made.

Gabler’s main thesis is that these producers (whom Gabler terms ’Hollywood Jews’) generally came from poor, fatherless backgrounds, and felt like outsiders in America because of their Jewishness. In Hollywood, these producers were able to run their own industry, assimilate into the American mainstream, and produce movies that fulfilled their vision of the American dream. Gabler asserts that the nature of their business and their movies can often be traced back to their feelings of alienation as immigrants.

The book also explains that the business background of the ’Hollywood Jews’ in theatre-ownership, retail distribution, and the garment industry shaped the approach these studio owners took to crafting movies for a popular audience, one similar to the marketing of films as commodities as well as works of art.

From LA Times by Joel Stein: Who runs Hollywood? C’mon 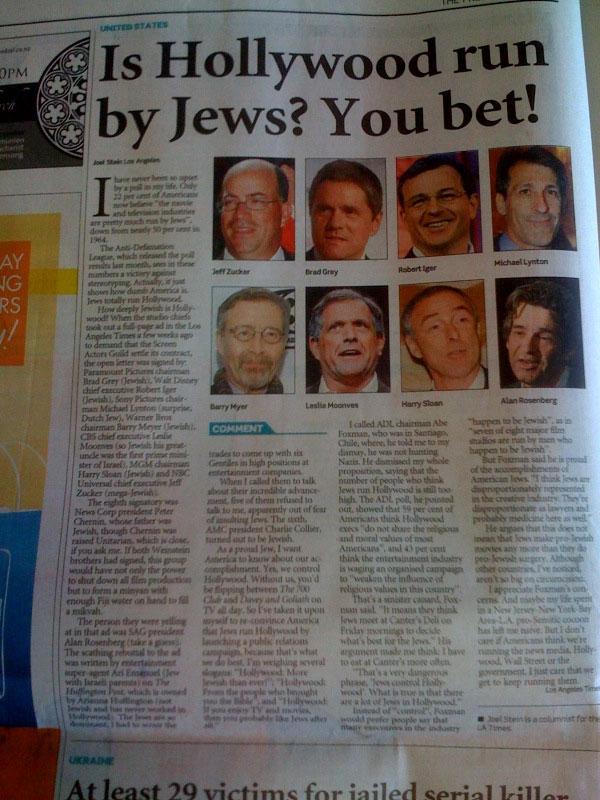 A poll finds more Americans disagree with the statement that ’Jews control Hollywood.’ But here’s one Jew who doesn’t.

How deeply Jewish is Hollywood? When the studio chiefs took out a full-page ad in the Los Angeles Times a few weeks ago to demand that the Screen Actors Guild settle its contract, the open letter was signed by: News Corp. President Peter Chernin (Jewish), Paramount Pictures Chairman Brad Grey (Jewish), Walt Disney Co. Chief Executive Robert Iger (Jewish), Sony Pictures Chairman Michael Lynton (surprise, Dutch Jew), Warner Bros. Chairman Barry Meyer (Jewish), CBS Corp. Chief Executive Leslie Moonves (so Jewish his great uncle was the first prime minister of Israel), MGM Chairman Harry Sloan (Jewish) and NBC Universal Chief Executive Jeff Zucker (mega-Jewish). If either of the Weinstein brothers had signed, this group would have not only the power to shut down all film production but to form a minyan with enough Fiji water on hand to fill a mikvah.

The person they were yelling at in that ad was SAG President Alan Rosenberg (take a guess). The scathing rebuttal to the ad was written by entertainment super-agent Ari Emanuel (Jew with Israeli parents) on the Huffington Post, which is owned by Arianna Huffington (not Jewish and has never worked in Hollywood.)

The person they were yelling at in that ad was SAG President Alan Rosenberg (take a guess). The scathing rebuttal to the ad was written by entertainment super-agent Ari Emanuel (Jew with Israeli parents) on the Huffington Post, which is owned by Arianna Huffington (not Jewish and has never worked in Hollywood.)

The Jews are so dominant, I had to scour the trades to come up with six Gentiles in high positions at entertainment companies. When I called them to talk about their incredible advancement, five of them refused to talk to me, apparently out of fear of insulting Jews. The sixth, AMC President Charlie Collier, turned out to be Jewish.

As a proud Jew, I want America to know about our accomplishment. Yes, we control Hollywood. Without us, you’d be flipping between "The 700 Club" and "Davey and Goliath" on TV all day.

So I’ve taken it upon myself to re-convince America that Jews run Hollywood by launching a public relations campaign, because that’s what we do best. I’m weighing several slogans, including: "Hollywood: More Jewish than ever!"; "Hollywood: From the people who brought you the Bible"; and "Hollywood: If you enjoy TV and movies, then you probably like Jews after all."

I called ADL Chairman Abe Foxman, who was in Santiago, Chile, where, he told me to my dismay, he was not hunting Nazis. He dismissed my whole proposition, saying that the number of people who think Jews run Hollywood is still too high. The ADL poll, he pointed out, showed that 59% of Americans think Hollywood execs "do not share the religious and moral values of most Americans," and 43% think the entertainment industry is waging an organized campaign to "weaken the influence of religious values in this country."

meet at Canter’s Deli on Friday mornings to decide what’s best for the Jews." Foxman’s argument made me rethink: I have to eat at Canter’s more often.

"That’s a very dangerous phrase, ’Jews control Hollywood.’ What is true is that there are a lot of Jews in Hollywood," he said. Instead of "control," Foxman would prefer people say that many executives in the industry "happen to be Jewish," as in "all eight major film studios are run by men who happen to be Jewish."

But Foxman said he is proud of the accomplishments of American Jews. "I think Jews are disproportionately represented in the creative industry. They’re disproportionate as lawyers and probably medicine here as well," he said. He argues that this does not mean that Jews make pro-Jewish movies any more than they do pro-Jewish surgery. Though other countries, I’ve noticed, aren’t so big on circumcision.

I appreciate Foxman’s concerns. And maybe my life spent in a New Jersey-New York/Bay Area-L.A. pro-Semitic cocoon has left me naive. But I don’t care if Americans think we’re running the news media, Hollywood, Wall Street or the government. I just care that we get to keep running them.