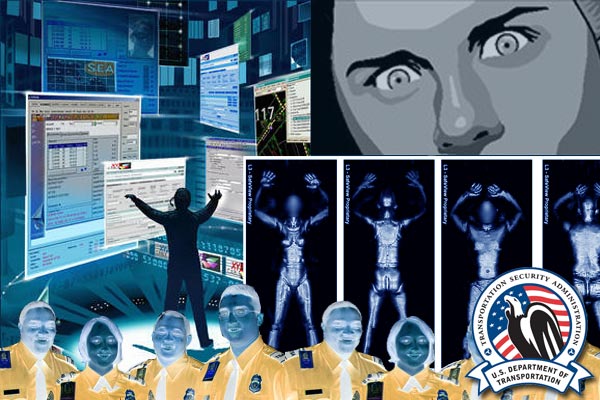 Half-baked Homeland Security is spending millions to develop sensors capable of detecting a person's level of 'malintent' as a counterterrorism tool.

In the sci-fi thriller Minority Report, Tom Cruise plays a D.C. police detective, circa 2054, in the department of "pre-crime," an experimental law enforcement unit whose mission -- to hunt down criminals before they strike -- relies on the psychic visions of mutant "pre-cogs" (short for precognition) who can see the future. It may be futuristic Hollywood fantasy, but the underlying premise -- that we can predict (if not see) a person's sinister plans before they follow through -- is already here.

This past February, the Department of Homeland Security (DHS) awarded a one-year, $2.6 million grant to the Cambridge, MA.-based Charles Stark Draper Laboratory to develop computerized sensors capable of detecting a person's level of "malintent" -- or intention to do harm. It's only the most recent of numerous contracts awarded to Draper and assorted research outfits by the U.S. government over the past few years under the auspices of a project called "Future Attribute Screening Technologies," or FAST. It's the next wave of behavior surveillance from DHS and taxpayers have paid some $20 million on it so far.

Conceived as a cutting-edge counter-terrorism tool, the FAST program will ostensibly detect subjects' bad intentions by monitoring their physiological characteristics, particularly those associated with fear and anxiety. It's part of a broader "initiative to develop innovative, non-invasive technologies to screen people at security checkpoints," according to DHS.

The "non-invasive" claim might be a bit of a stretch. A DHS report issued last December outlined some of the possible technological features of FAST, which include "a remote cardiovascular and respiratory sensor" to measure "heart rate, heart rate variability, respiration rate, and respiratory sinus arrhythmia," a "remote eye tracker" that "uses a camera and processing software to track the position and gaze of the eyes (and, in some instances, the entire head)," "thermal cameras that provide detailed information on the changes in the thermal properties of the skin in the face," and "a high resolution video that allows for highly detailed images of the face and body … and an audio system for analyzing human voice for pitch change."

Ultimately, all of these components would be combined to take the form of a "prototypical mobile suite (FAST M2) … used to increase the accuracy and validity of identifying persons with malintent."

Coupled with the Transportation Security Administration's Behavior Detection Officers, 3,000 of whom are already scrutinizing travelers' expressions and body language at airports and travel hubs nationwide, DHS officials say that FAST will add a potentially lifesaving layer of security to prevent another terrorist attack. "There's only so much you can see with the naked eye," DHS spokesperson John Verrico told AlterNet. "We can't see somebody's heart rate…. We may be able to see movements of the eye and changes in dilation of the pupil, but will those give us enough [information] to make a determination as to what we're really seeing?"

Ideally, Verrico says, FAST mobile units would be used for security, not just at airports, but at "any sort of a large-scale event," including sporting events or political rallies. ("When the Pope visited Washington D.C.," he says, "it would have been nice to have something like this at the entrance of the stadium.")

"Basically," says Verrico, "we're looking to give the security folks just some more tools that will help to add to their toolbox."

If you think eye scanners and thermal cameras sound like the twisted props of some Orwellian dystopia, you're not alone. FAST may be years from being operational, but civil libertarians have already raised concerns over its implications.

"We think that you have an inherent privacy right to your bodily metabolic functions," Jay Stanley, director of the ACLU's Technology and Liberty program told AlterNet. "Just because somebody can build some high-tech piece of equipment that can detect your pulse and perspiration and breathing and heart rate, that doesn't mean that it should be open season to detect that on anybody without suspicion."

Besides, he says, the FAST program is based on "the same old pseudo-scientific baloney that we've seen in so many other areas. As far as I can tell, there's very little science that establishes the efficacy of this kind of thing. And there probably never will be."

Bruce Schneier, a security technologist and bestselling author who has been one of the most vociferous critics of such new high-tech DHS initiatives, concurs. In fact, he says, all the evidence suggests the opposite. "The problem is the false positives," he says.

Beyond the fact that ordinary travelers are likely to exhibit many of the symptoms supposedly indicative of malintent (how many people run to catch a plane and end up overheated and out of breath?), compare the rarity of terrorist attacks with the millions of travelers who pass through a security checkpoint. Statistically, Schneier argues, it's a fool's errand. "If you run the math, you get several million false positives for every real attack you find. So it ends up being as useless as picking people randomly. If you're going to spend money on something, you can spend money on dice -- it's cheaper. And equally as effective."

Read the full article at: AlterNet.org