If you are still needing an academic tutorial on exactly how the mainstream media is able to generate a completely phony public consensus to support foreign intervention projects, you need look no further than the dangerous, fictional narrative currently being rolled out regarding Syria.

This past Saturday and Sunday morning, almost every major corporate mainstream newspaper and TV network in North America and in Europe ran with the average headline, “Massacre of the children as Syrian forces hit rebels”, giving hundreds of millions of readers and viewers to artificial impression that it was Syrian government forces – and not western-backed terrorist groups, who carried out a massacre on children and others days ago - even though, the true culprit of these attacks has not yet been determined – a fact which was only briefly mentioned later on in these very same media reports.

One of the UK best-selling weekend papers and most widely read online journals, Guardian media group’s The Observer, ran such a headline – one which shamelessly implied that the Syrian government carried out a massacre in Houla. This was used to shape public opinion in Europe, a reality which is later shaped for the North American market. 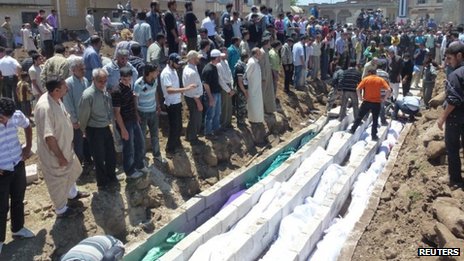 Corporate Journalism: The Art of Deception

It shouldn’t take a genius to see through this relentless western effort to takeover Syria, but not having learned their lesson from Libya, so many hard working and well educated westerners are bound to fall for it all over again.

Cui bono? Who benefits… from another civilian massacre? Clearly not the Syrian government. But western-backed terrorist groups who have been working to destabilize the country for over one year now, do clearly benefit.

Who would be the chief suspect for this latest massacre? How about the western-backed terrorists in Syria – the very same terrorist groups admitted to their own bombing campaign that killed many innocent people in Syria only weeks ago.

Important to add here also, that the latest child massacre in Syria has been reported as being “done with knives” – which doesn’t sound like a government attack to any intelligent reader.

Syria: Why Houla massacre may not lead to intervention

A 2003 photo taken in Iraq was mistakenly used by the BBC website to illustrate a report about the recent massacre in Houla, Syria.

The Daily Telegraph reports that the image of a child jumping over body bags was removed from the story after the BBC realized its error. The photographer who took the shot is incredulous that the BBC could have confused his photo with recent events.

“I went home at 3am and I opened the BBC page, which had a front page story about what happened in Syria, and I almost felt off from my chair,” Marco di Lauro told the Telegraph. “One of my pictures from Iraq was used by the BBC web site as a front page illustration claiming that those were the bodies of yesterday’s massacre in Syria and that the picture was sent by an activist.”

The caption on the BBC image read, “This image – which cannot be independently verified – is believed to show the bodies of children in Houla awaiting burial.” The credit line on the image said, “Photo From Activist.”

Di Lauro posted on Facebook Sunday about the use of his image, and included this screenshot of the BBC website: 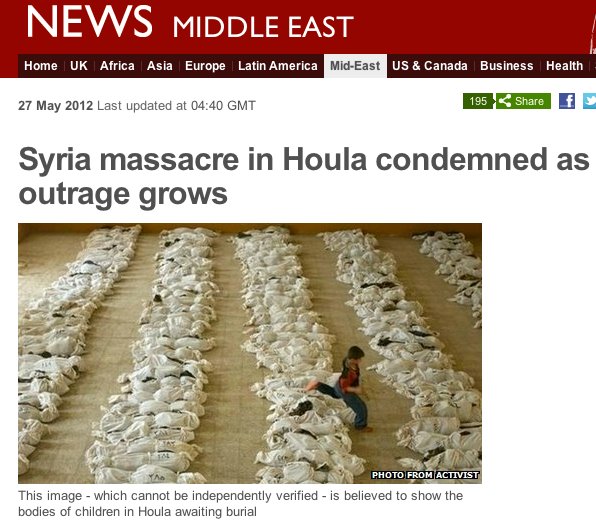 Somebody is using illegaly one of my images for anti syrian propaganda on the BBC web site front page.

Today Sunday May 27 at 0700 am London time the attached image which I took in Al Mussayyib in Iraq on March 27, 2003 (see caption below) was front page on BBC web site illustrating the massacre that happen in Houla the Syrian town and the caption and the web site was stating that the images was showing the bodies of all the people that have been killed in the massacre and that the image was received by the BBC by an unknown activist. Somebody is using my images as a propaganda against the Syrian government to prove the massacre.

BBC Responds Over False Tripoli Footage. In summary: Sorry, we got “confused”