How Green Was the ’Green Pope’?

Mar 1, 2013 Source: news.nationalgeographic.com
One of Benedict’s lasting legacies might be how he steered the global debate over climate change. 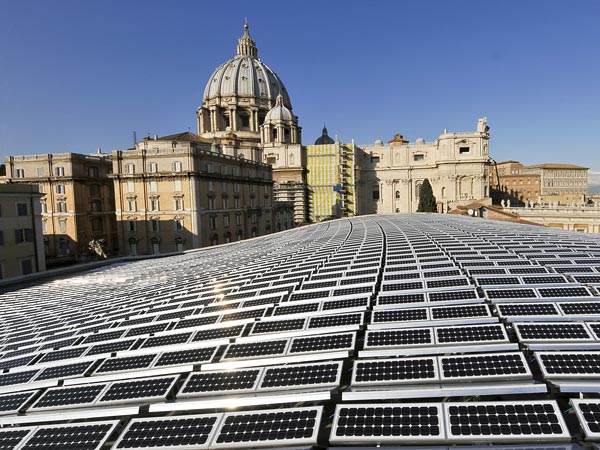 More than 1000 solar panels cover the roof of the Paul VI audience hall, generating enough energy to supply all heating, cooling, and lighting for the building.

As the world’s one billion Catholics wait for white smoke to rise above the Vatican, signaling the election of a new pontiff, it’s how clear the air is elsewhere that will go a long way toward shaping the legacy of retiring Pope Benedict XVI. Among the many titles Benedict has been given over his eight-year reign, the "Green Pope" is certainly one of the most unexpected. But to Vatican observers, Green Pope is entirely appropriate, as the pontiff has made environmental awareness a key tenant of his tenure.

Benedict wasn’t the first environmentally conscious pope. In 1990, Pope John Paul II went on record during a speech on the World Day of Peace urging Catholics to regard the natural world as one of God’s creations worth protecting. By the time Benedict first put on his papal robes in 2005, caring for the environment had become an important part of the church’s doctrine. Benedict gave the issue an even higher profile. He delivered homilies and speeches asking world leaders to take seriously the harm being inflicted on the planet. "If we want justice and peace, we must protect the habitat that sustains us," Benedict said on the 2010 World Day of Peace. Not long after, the influential Pontifical Academy of Sciences, a scientific arm of the Vatican, released a report on climate change recommending that world leaders cut carbon dioxide emissions, reduce existing pollution, and prepare for the inevitable impacts of a changing climate.

Benedict also made moves on his home turf. He approved a plan to cover the Vatican’s Paul VI hall with solar panels, enough to power the lighting, heating, and cooling of a portion of the entire country (which covers, of course, a mere one-fifth of a square mile). He authorized the Vatican’s bank to purchase carbon credits by funding a Hungarian forest that would make the Catholic city-state the only country fully carbon neutral. And several years later, he unveiled a new hybrid Popemobile that would be partially electric.

At a time when the church was dealing with more pressing structural issues within its ranks, some of Benedict’s moves could be seen as simply good PR-inexpensive changes to build good will. Yet certain Vatican watchers see Benedict’s efforts as genuine. "I think it’s remarkable how much attention he gave to the environment; this for him was a big theme," said Walter Grazer, an adviser to the National Religious Partnership for the Environment and former spokesman for the U.S. Conference of Catholic Bishops (USCCB). In this regard, Benedict’s advocacy, says Grazer, is likely to set the tone for a successor tasked with making the church’s pastoral teachings more aligned with issues of modern life.

Read the full article at: nationalgeographic.com
2010:

In an attempt to remain hip, the Vatican has rendered its verdict on James Cameron’s mega-blockbuster Avatar — and they pretty much say it sucks. In fact, if there was a Regal Cinema in heaven, they’re quite confident the latest Kirk Cameron film would be playing instead.

The main criticism is that the film weakens the idea of a God in heaven by instead promoting the worship of nature — specifically, a giant tree.

L’Osservatore said the film “gets bogged down by a spiritualism linked to the worship of nature.” Along the same lines, Vatican Radio said it “cleverly winks at all those pseudo-doctrines that turn ecology into the religion of the millennium.”

“Nature is no longer a creation to defend, but a divinity to worship,” the radio said.

According to Vatican sources, the present Pope is far more engaged in the green debate than John Paul. In the past year Benedict has spoken strongly on the need to preserve rainforests. In the next few weeks he visits Brazil.

"There is no longer a schism. The new interest in climate change and the environment is not surprising really. Benedict comes out of 1960s Germany, where environment and disarmament were major issues. It’s conceivable that his ministry could even culminate in a papal encyclical on the environment," said one analyst. This would be the most powerful signal to the world’s Catholics about the need for environmental awareness at every level.
Source