Apr 19, 2013 Source: thedailybeast.com
With advice from former CIA operatives and lawyers, Disney bought up the land for Florida’s Disney World and orchestrated a unique legal situation—and set up an unconstitutional form of government.
An excerpt from T.D. Allman’s Finding Florida.

Starting in the mid-1960s when Disney set out to establish the Disney World Theme Park, they were determined to get land at below market prices and Disney operatives engaged in a far-ranging conspiracy to make sure sellers had no idea who was buying their Central Florida property. By resorting to such tactics Disney acquired more than 40 square miles of land for less than $200 an acre, but how to maintain control once Disney’s empire had been acquired? The solution turned out to be cartoon-simple, thanks to the CIA. 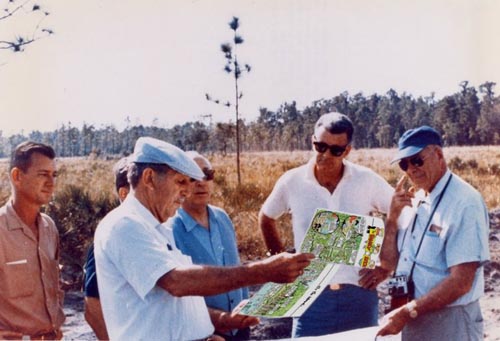 Walt Disney surveys Florida land holdings, looks at map.
Disney’s key contact was the consummate cloak-and-dagger operator, William "Wild Bill" Donovan. Sometimes called the "Father of the C.I.A," he was also the founding partner of Donovan, Leisure, Newton & Irvine, a New York law firm whose attorneys included future C.I.A. director William Casey. Donovan’s attorneys provided fake identities for Disney agents; they also set up a secret communications center, and orchestrated a disinformation campaign. In order to maintain "control over the overall development," Disney and his advisers realized, “the company would have to find a way to limit the voting power of the private residents" even though, they acknowledged, their efforts "violated the Equal Protection Clause" of the U.S. Constitution. Here again the CIA was there to help. Disney’s principal legal strategist for Florida was a senior clandestine operative named Paul Helliwell. Having helped launch the C.I.A. secret war in Indochina, Helliwell relocated to Miami in 1960 in order to coordinate dirty tricks against Castro. At a secret "seminar" Disney convened in May 1965 Helliwell came up with the approach that to this day allows the Disney organization to avoid taxation and environmental regulation as well as maintain immunity from the U.S. Constitution. It was the same strategy the C.I.A. pursued in the foreign countries. Set up a puppet government; then use that regime to do your bidding.

Though no one lived there, Helliwell advised Disney to establish at least two phantom "cities,” then use these fake governments to control land use and make sure the public monies the theme park generated stayed in Disney’s private hands. On paper Disney World’s "cities" would be regular American home towns—except their only official residents would be the handful of hand-picked Disney loyalists who periodically "elected" the officials who, in turn, ceded complete control to Disney executives.

In early 1967, the Florida legislature created Hallowell’s two "cities,” both named for the artificial reservoirs Disney engineers created by obstructing the area’s natural water flow. When you visit Disney’s Magic Kingdom, you are visiting the City of Bay Lake, Florida. The other was the City of Lake Buena Vista. In both “cities,” in violation of both the U.S. and Florida Constitutions the Disney-engineered legislation established a property qualification for holding elective office, requiring that each candidate for office there "must be the owner, either directly or as a trustee, of real property situated in the City" in order "to be eligible to hold the office of councilman."

Though enacted by the legislature, this and other crucial pieces of Disney-enabling legislation, which would reshape central Florida and affect the lives of tens of millions of people, was written by teams of Disney lawyers working in New York at the Donovan firm, and in Miami at Helliwell’s offices. Disney lawyers in California signed off on the text before it was flown to Tallahassee where, without changing a word, Florida’s compliant legislators enacted it into law. “No one thought of reading it,” one ex-lawmaker later remarked. Later, after the houses there were sold, compliant legislatures excluded all the residents of Celebration from Disney’s domain, to prevent them from voting.

Read the full article at: thedailybeast.com