If The Left Ever Regains Power, We Are Fucked

Seven seconds later, Richard Spencer had a fist through his jaw.

And when the footage was posted on Twitter, it took mere moments for the liberal consensus to arise: this violent assault was a great, heroic act.

This is the former Director of Speech Writing for Barack Obama:

I don't care how many different songs you set Richard Spencer being punched to, I'll laugh at every one.

And in the most insane turn of narrative you have ever seen, Esquire journalist Luke O’Neil called Atheist liberal David McAfee a “nazi apologist” FOR SAYING THAT YOU SHOULDN’T PUNCH PEOPLE IN THE FACE: 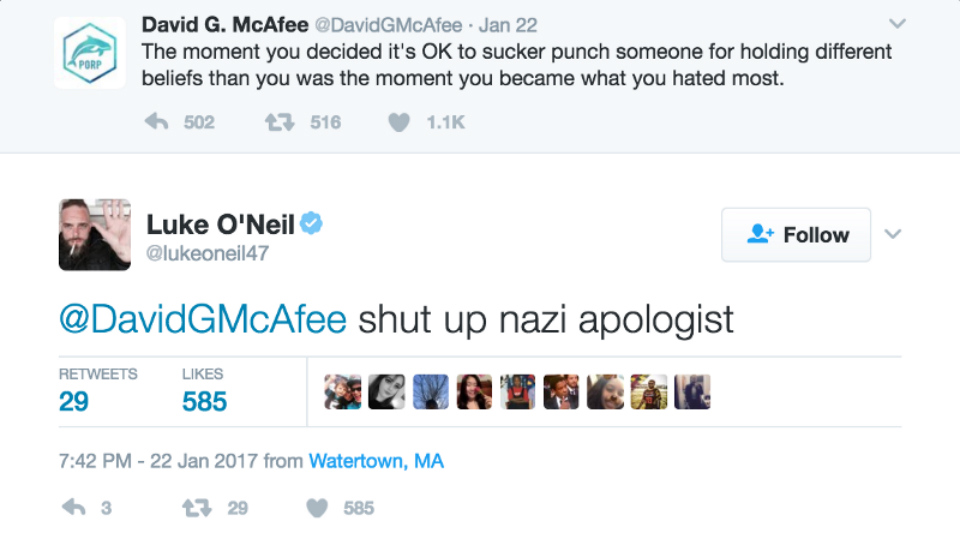 Spencer is, of course, not a Nazi. But that doesn’t matter. Frank Luntz, who can only be described as the most flaccidly moderate centrist on Earth, was attacked outside his D.C. hotel on Saturday for being a “fascist.”

So let me be very clear: every single person to the right of Frank Fucking Luntz is now considered a Nazi. That means you.

And your death will be cheered on Twitter. And the people who dare claim that your murder was wrong will be chastised. Because you are a Nazi.

They have unpersoned and dehumanized us for this very purpose; so that they can treat us like sub humans.

Donald Trump’s election is a miracle. The fact that the right wing in this country has been gifted one last chance at power is almost beyond belief. It looked for all the world that 8 years of Obama were to be followed by 4 of Hillary, after which our Supreme Court would be stacked left, millions of illegals amnestied, and the American right wing tossed in the dustbin of history.

Thanks to the most remarkable run in political history, Donald Trump won the 2016 election. It has granted us one last chance at power. We will never get another.

Because Donald Trump’s election may have given us a lifeline, but it has also raised the stakes tremendously. There is no turning back now. If the left ever gets back in power, they will be merciless. If power is returned to the bloodthirsty mobs who have explicitly justified open violence against the right, they will be openly violent against the right. And we will never see that power again.

It will be fucking over.

The institutions that the left has seized over the last few generations must be gutted. The media must continue to see their influence and credibility destroyed. The leftist brainwashing machine we refer to “public education” must be dismantled. Donald Trump cannot allow the left to terrorize the streets and intimidate the right. And we must dominate the elections over the next 8 years.

Social media gives me hope. It’s the x-factor that no previous wave of rising leftist tyranny has had to deal with. The effect of street thuggery may be nullified by the utilization of social media to wake up and inspire masses.

But if we are going to succeed and survive, we need to recognize the magnitude of the battle at hand.

This is our last chance. Time to start acting like it.