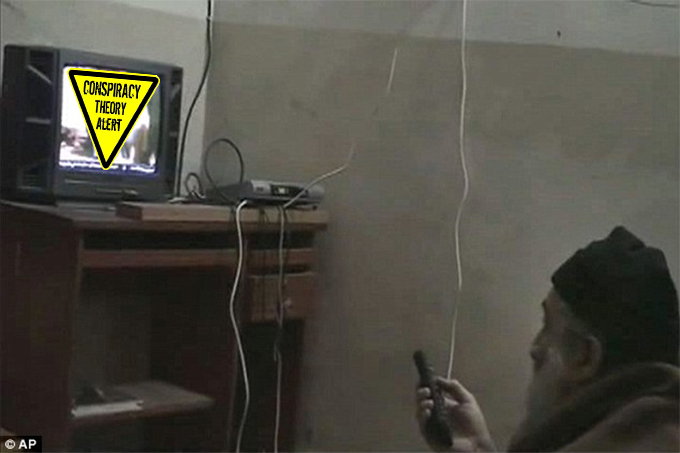 At its heart, the story of Osama bin Laden's time at his house in Abbottabad is surreal. The American image of bin Laden - leering at us from under his head wrap as he plots and schemes - is undermined by the mundane realities of his life. The guy was responsible for murdering thousands of Americans and orchestrating a global terror network. He also sat in his house in Pakistan and read Time magazine articles about AOL's stock price and loopy conspiracy theories he found online.

On Tuesday, the Office of the Director of National Intelligence released a compilation of the reading material found at bin Laden's compound during the 2011 raid that killed him. What strikes you as you skim it is one central theme: This is what your bookshelf looks like when you don't have access to the Internet.

He had a suit of manuals for Adobe image- and video-editing software, raising the tantalizing prospect that he was himself Photoshopping al Qaeda propaganda. He had a number of books about foreign policy and the Bush administration. He had maps of the world and maps of time zones. He had a bunch of articles from Newsweek and Time either clipped or printed out, and copies of Foreign Policy magazine. He had a manual for the game Delta Force Extreme 2, and a Gamespot guide to videogames. He had ... other things. He couldn't get online to look up a time zone or to figure out how to use Adobe Premiere's timeline functionality, so he had it on paper, within reach.

But more specifically: Bin Laden's library was the equivalent of an Internet conspiracy theorist's browser history. There was a print out of a weird articleabout a card game that was said to have predicted the Sept. 11, 2001, attacks. He had an e-book about voter fraud conspiracies from BlackBoxVoting.org. He had books documenting the fringes of American politics. He had a 1928 book called "The Secret Teaching of All Ages" that details various aspects of forgotten religions and the occult; he had a book unveiling "The Secrets of the Federal Reserve." And, like a rebellious teenager, he checked out the official government material on MK ULTRA, the CIA's mind control efforts during the Cold War.

The bookshelf contains a number of letters, too (letters once upon a time served a function similar to e-mail). There's a paper job application, which includes - and I am not making this up - an emergency contact request: "Who should we contact in case you became a martyr?" Oh, my wife, here's her cell.

Combing through the list is fascinating in the same way that it's interesting to go to a garage sale. You can come to a lot of conclusions about a person by looking at what they own, conclusions that may be correct or not. In this case, our information about the owner of the books is backed up by knowing who he was in the rest of his life. The guy seems like an anti-American conspiracy nut - only fitting for a guy who conspired against America. But also he seems kind of sad, not in a way to inspire empathy, but in a way that would inspire pathos.

Not that any of our browser histories are much better.