Immortality only 20 years away says scientist

Sep 26, 2009 Source: telegraph.co.uk
Scientist Ray Kurzweil claims humans could become immortal in as little as 20 years' time through nanotechnology and an increased understanding of how the body works. 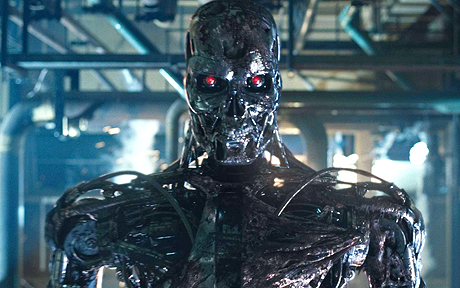 Ray Kurzweil claims we could all be cyborgs in 20 years.
The 61-year-old American, who has predicted new technologies arriving before, says our understanding of genes and computer technology is accelerating at an incredible rate.

He says theoretically, at the rate our understanding is increasing, nanotechnologies capable of replacing many of our vital organs could be available in 20 years time.

Mr Kurzweil adds that although his claims may seem far-fetched, artificial pancreases and neural implants are already available.

Mr Kurzweil calls his theory the Law of Accelerating Returns. Writing in The Sun, Mr Kurzweil said: "I and many other scientists now believe that in around 20 years we will have the means to reprogramme our bodies' stone-age software so we can halt, then reverse, ageing. Then nanotechnology will let us live for ever.

"Ultimately, nanobots will replace blood cells and do their work thousands of times more effectively.

"Within 25 years we will be able to do an Olympic sprint for 15 minutes without taking a breath, or go scuba-diving for four hours without oxygen.
"Heart-attack victims – who haven't taken advantage of widely available bionic hearts – will calmly drive to the doctors for a minor operation as their blood bots keep them alive.

"Nanotechnology will extend our mental capacities to such an extent we will be able to write books within minutes.

"If we want to go into virtual-reality mode, nanobots will shut down brain signals and take us wherever we want to go. Virtual sex will become commonplace. And in our daily lives, hologram like figures will pop in our brain to explain what is happening.

"So we can look forward to a world where humans become cyborgs, with artificial limbs and organs." 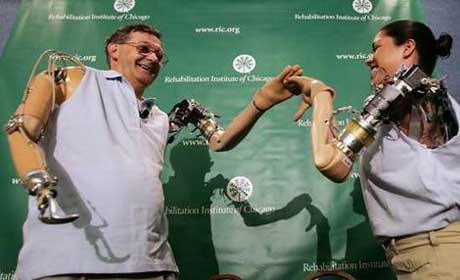 High five: the world's first "bionic" man and woman, Jesse Sullivan and Claudia Mitchell, come to grips with their prostheses in a public display in Washington.
Photo: AFP

The Age of Transitions (Video)

The Age of Transitions

UNESCO its purpose and its philosophy (pdf)

Neuroethics: the practical and the philosophical

Neuroethics: the practical and the philosophical (pdf)

Evolution as theory and fact

'Sex chip' being developed by scientists


Sonia Barrett - Immortality and the Quest for Eternal Life

Sonia Barrett - Immortality and the Quest for Eternal Life Continued