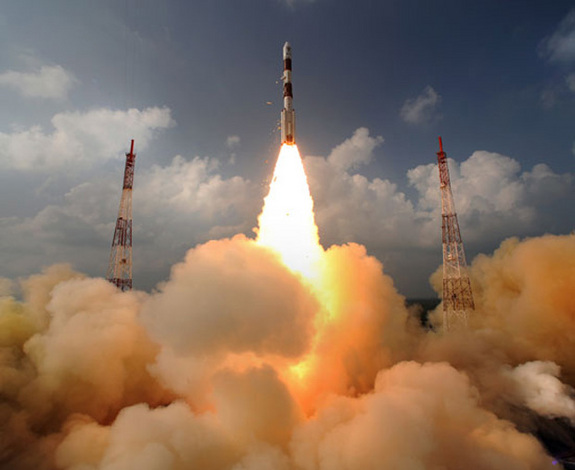 India will aim today to become the first Asian nation to launch a space probe to the planet Mars. (Update: The rocket carrying the probe successfully lifted-off at 09.08 UT).

The cut-price mission is due to blast off carrying an unmanned craft to orbit the Red Planet, studying its geology, climate, atmosphere and looking for signs of methane that might indicate life.

Yesterday, 4 November, the Indian Space Research Organisation (ISRO) began filling the launch rocket’s second stage with propellant at the Sriharikota site at Andhra Pradesh, in the Bay of Bengal.

The orbiter, dubbed Mangalyaan, meaning Mars-craft, will be lifted into space by a Polar Satellite Launch Vehicle (PSLV) rocket that has previously been used to put satellites into pole-to-pole orbits around the Earth.

If circumstances delay lift-off, due at 09.08 UT, then ISRO will have around 20 days to get the probe into space, using the launch window that comes round every two years or so to reach Mars when it is at its closest to Earth.