Internet lines up behind The Declaration of Internet Freedom 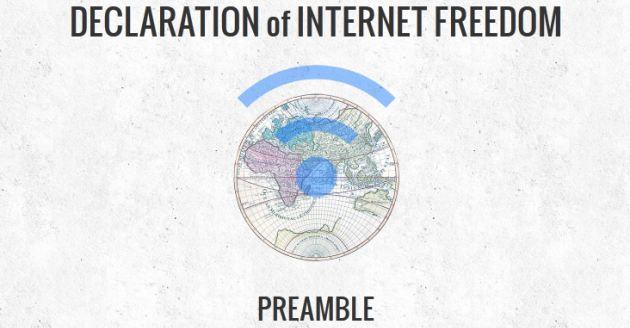 It’s no secret that various parts of the internet have been under attack for some time. Traditional media companies respond with terror at the thought of losing even more business to piracy (though it’s questionable just how much they’re actually hurting). Cable internet providers want the right to control what speeds you’re allowed to access what sites at. And the U.S. government, meanwhile, wants to help these companies out by making streaming copyrighted content punishable by up to five years in prison.

Some major names on the internet have had enough of playing defense. That’s why they’re launching a new initiative called the Declaration of Internet Freedom. It’s a short five-point document — a Bill of Rights of sorts — that lists out the basics of what humanity should expect and deserve from the internet. It reads:

"We stand for a free and open Internet. We support transparent and participatory processes for making Internet policy and the establishment of five basic principles:

Openness: Keep the Internet an open network where everyone is free to connect, communicate, write, read, watch, speak, listen, learn, create and innovate.

Innovation: Protect the freedom to innovate and create without permission. Don’t block new technologies, and don’t punish innovators for their users’ actions.

The Declaration of Internet Freedom is supported by a number of well-known, high-tech names, such as Mozilla (creators of Firefox), the American Civil Liberties Union (ACLU), left-wing political opinion site Daily Kos, and right-wing blogging heavyweight Patrick Ruffini. By backing the document, the organization hopes to promote understanding and build support for the cause. Private individuals are urged to take action through partner sites such as the non-profit Electronic Frontier Foundation.