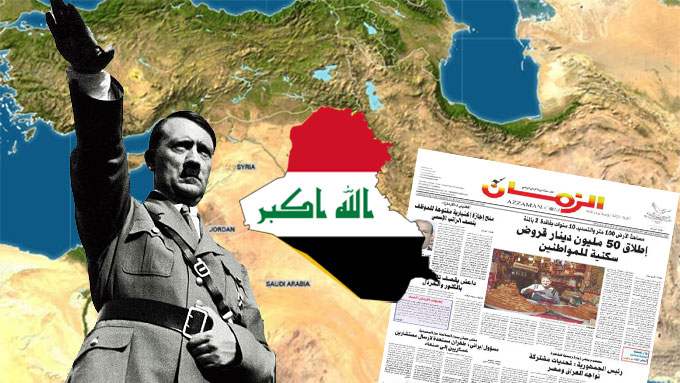 On March 6, 2016, the Iraqi daily Al-Zaman published an article titled "Iraq Needs Hitler" by Karim Al-Taee that quoted some of Hitler's statements about the Jews from Mein Kampf stating that they were correct also about the Jews today in Iraq.

The article added that the Jews living in northern Iraq today have a secret plan to take over Mosul, in order to prepare for a Jewish-Western takeover of all Iraq's resources. They are doing this by means of distracting the Iraqis, overloading the political arena with bogus issues, and by means of taking advantage of the Iraqi MPs that they control.

The following are translated excerpts from the article:

"Hitler said: 'I could have killed all the Jews, but I kept some [alive] so the world would understand why I killed them.'

"When I read Adolf Hitler's book Mein Kampf, I discovered that the situation from which Germany suffered is identical to that which has beset Iraq ever since the 2003 replacement [of the Saddam Hussein regime] in 2003. The main reason for the war in Germany was the Jews, because they weakened the nation and its people and [completely] consumed [the country's] resources. They exploited [their control] of funds and the interest [earned on them] in order to attain the most senior positions in the state, and to kill its people both spiritually by poisoning their minds with ideas distancing the people from their nationalism and affiliation, and physically by starving them and making the daily concern about food into their main worry.

"The course of events in Iraq is like a nice game played by the West, with the Jews at their head. Everyone knows that the Jews are settling in Iraq's northern regions, and that since 2007 they have been [implementing] a clandestine settlement plan in Mosul by purchasing land at rock-bottom prices. Planning for the Islamic State's entry into Iraq had by then already been completed [at that point], because the Jewish strategy is to lay the groundwork from within prior to attacking.

"Hitler said: 'The Jews are like parasitic plants that burden the nations and compete with them for their sources of income. The Jew conceals his [true] aspirations behind the mask of his powdered face, and behind the screen of the Jewish community. Then, when he thinks he is capable of imposing his rule and establishing his state, he reveals his true self, and begins implementing his malice and actualizing his objectives.

"Isn't this what is happening in Iraq[?]! Has anyone wondered what is the most important thing to be concerned about – the future? Or the present? Indeed, I maintain that the future is grim, and the present is of no value. [The Jewish-Western] imperialism has made pawns of the Iraqi people, exploiting their intellectual weakness and the fact that their material needs go unmet even though Iraq is a ship floating in a sea of oil!! This is because they [i.e. the imperialists] have transformed the [Iraqi] citizen into... merely a consumer, incapable of acting and changing, inert in all respects. Iraq does not take advantage of its own resources for a simple reason: People must be preoccupied with imaginary things, so that imperialism can consume these resources without being called to account. [Additionally], religion is one of the main things that the Jews have exploited in order to start a war of all against all, that is, religion against religion.

"This barbaric [Jewish] entity, that has gotten completely out of control, has no basis for existence. It was created... to distract the people from important affairs of state, and to clear the decks for the thieves and the bloody games in parliament, that are manipulated by the West to its heart's content.

"The problem is that the people's pan-Arab sentiment and sense of belonging have been destroyed by hunger, poverty, unnatural death, and the ideas sown in order to fully attain this objective. This is in addition to the years of intellectual and material siege experienced by [the people] under the most tyrannical dictator of all the Arab governments [i.e. Saddam Hussein].

"The [Jewish-Western] chessboard allows millions of stratagems for defeating their rival – and yes, that rival is that Iraqi who solicits [charitable] donations.... The rival is that grandmother collecting tin cans from the garbage dump and selling them to provide the bare minimum to sustain her martyred son's orphans. The rival is those powerless women now for sale in the slave market. The rival is us, and anyone who thinks the fate of his country is important.

"The West has killed off nationalism and pan-Arabism in the Iraqi people; their voice goes unheard, and they have no government to represent them. [Yet] the [do-nothing] MPs can pass laws for their salaries the same day. The parliament is fertile ground for the plague-like spread of oppressive ideas! People who do not understand politics cannot be blamed for electing [such] representatives.

"As Hitler said: 'Parliamentary government gives politicians an opportunity to carry out worthless tasks that preoccupy the political arena... This ensnares the hearts and besots the minds of the politicians, who benefit from their political posts. The moronic politician need not feel responsible for his actions, because he knows full well that he will not be in the political arena for long.' ...

"If we [the Iraqis] take a close look at the situation, we will clearly see the evil of the game that has been forced on us, or into which we have inserted ourselves. But even though everyone, or most, are aware of all the real and dangerous moves, they ignore them, claiming falsely that they do not notice them. What truly interests the people are legitimate material demands; what primarily interests politicians is stealing money and filling their Western bank accounts.

"We [Iraqis] are revolving around a single axis – the Jews. They are the first and last manipulator of their pawns among the Iraqi politicians and MPs. The only solution for Iraq is a genuine revolution; a student intifada will bring a better future if we place the voice of the homeland, the citizen, and civics above everything else; subject ourselves to the law of reason and logic; raise the slogan of 'Iraq and only Iraq,' and at least for a while, set aside our secondary identities."