Is Membership for Catholics in Freemasonry Really 'Prohibited'? 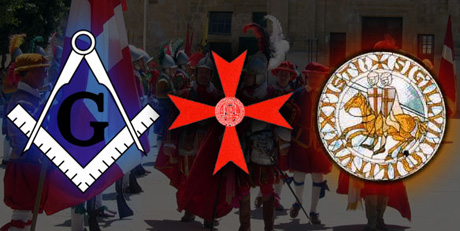 Comment & Update: This article was first published in our members section over a year ago. The debate over Membership for Catholics in Freemasonry have surfaced again considering the recent article: Masonic Lodge in Italy appoints Catholic priest as chaplain, claims "openness" to Catholic Church.

I found this interesting article over at catholickey.org, written by Bishop Robert W. Finn, entitled "Membership for Catholics in Freemasonry is Prohibited":

Over my years as a priest the question of whether or not Catholics can belong to the Masons arises at times. Recently I was asked the question again.

I have known some members of the Masons over the years. They are fine gentlemen dedicated to the good of the community. The Shriners Hospital, for one example, does exemplary work for children of all creeds.

Catholic are clearly prohibited from membership in the Masons. Though various Web sites indicate that the Masons are not a religion, the Masons have a "priesthood" and prescribed rituals. Catholics cannot be members of two religious denominations, and so it seems that, while we may be friends with Masons and even admire their work, as Catholics we cannot belong. 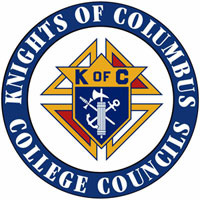 The Knights of Columbus, longtime fraternal organization in the Church, publishes the Catholic Word Book which gives brief explanations about many issues. Below is the 2007 entry on Freemasons. I hope that you will find it informative, and at the same time, let us renew our determination and pledge to find ways to work with other men and women of good will.

Freemasons: A fraternal order that originated in London in 1717 with the formation of the first Grand Lodge of Freemasons. From England, the order spread to Europe and elsewhere. Its principles and basic rituals embody a naturalistic religion, active participation in which is incompatible with Christian faith and practice. Grand Orient Freemasonry, developed in Latin countries, is atheistic, irreligious and anticlerical. In some places, Freemasonry has been regarded as subversive of the state; in Catholic quarters, it has been considered hostile to the Church and its doctrine. In the United States, Freemasonry has been widely regarded as a fraternal and philanthropic order.

For serious doctrinal and pastoral reasons, Catholics were forbidden to join the Freemasons under penalty of excommunication, according to Church law before 1983. Eight different Popes in 17 different pronouncements, and at least six different local councils, condemned Freemasonry. The first condemnation was made by Clement XII in 1738. Eastern Orthodox and many Protestant bodies have opposed the order.

In the U.S., there was some easing of the ban against Masonic membership by Catholics in view of a letter written in 1974 by Cardinal Franjo Seper, prefect of the Congregation for the Doctrine of the Faith. The letter was interpreted to mean that Catholics might join Masonic lodges which were not anti-Catholic. This was called erroneous in a declaration by the Doctrinal Congregation February 17, 1981.

The prohibition against Masonic membership was restated in a declaration issued by the Doctrinal Congregation November 26, 1983, with the approval of Pope John Paul II, as follows. "The Church's negative position on Masonic associations remains unaltered, since their principles have always been regarded as irreconcilable with the Church's doctrine. Hence joining them remains prohibited by the Church. Catholics enrolled in Masonic associations are involved in serious sin and may not approach Holy Communion. Local ecclesiastical authorities do not have the faculty to pronounce a judgment on the nature of Masonic associations which might include a diminution of the above-mentioned judgment." This latest declaration, like the revised Code of Canon Law, does not include a penalty of excommunication for Catholics who join the Masons.

Local bishops are not authorized to grant dispensations from the prohibition. The foregoing strictures against Masonic membership by Catholics were reiterated in a report by the Committee for Pastoral Research and Practice, National Conference of Catholic Bishops, released through Catholic News Service, June 7, 1985. (From 2007 Book of Words, Knights of Columbus, page 33.)

Let me again say that, while membership in Freemasonry is irreconcilable with Catholicism, I commend the many good works that Masonic organizations undertake in service to the community.

Now, people like Cardinal Francis Spellman, Archbishop Edward M. Egan and even Tony Blair are just a few of the more known Catholics that also are members of the Knights of Malta. 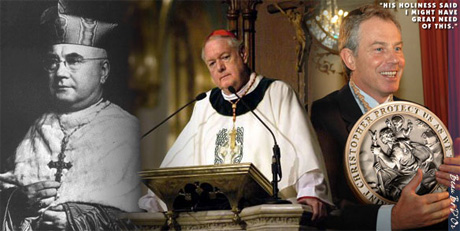 The Knights of Malta is a Catholic order, but what is interesting is that if you check under the wikipedia entry on Knights Templar (Freemason degree) it says that "The United Religious, Military and Masonic Orders of the Temple and of St John of Jerusalem, Palestine, Rhodes and Malta is an international philanthropic Masonic order affiliated with Freemasonry."

So if the Knights of Malta is affiliated with Freemasonry, what separates them? What is Bishop Robert W. Finn, who wrote the above article, talking about? My guess is that Bishop Finn don't know that many "top members" of Knights of Malta, Freemasonry and other Catholic Orders can be, and are, members of several organizations that on paper are "incompatible" or "against" one another.

To me there is no real clear distinction between "the medieval Knights Templar" and "the Knights Templar" (The full title is: The United Religious, Military and Masonic Orders of the Temple and of St John of Jerusalem, Palestine, Rhodes and Malta.) ...and with these many different names the lines become fuzzier to say the least.

Some researchers say that there is (or have been) a huge "dichotomy" between the Templars (Freemasonry) and the Vatican (Catholic Orders). The Templars were "violently excommunicated" from the Catholic Church in 1307 when they were arrested and burned at the stake by Philip the Fair. Either Philip the Fair operated on orders by Pope Clement V to go after the Templars or it's true that Philip the Fair had enough power over Clement V to make him go along with his own agenda to kill off and take the wealth (and consequently power) from the Templars.

Since the recent news about the Vatican paper that is set to clear the Knights Templar and the news that The Knights Templar demands an apology from the Pope, one wonders if the split ever was that great between these different organizations. Why is now the time to "kiss and make up"?

Here is a list with names of some of the Members of The Knights of Malta. Here's another one (Scroll down for the list).

Let's briefly take a look at Tony Blair as "top guy" who span across different organizations. Some researchers claim that Mr. Blair is infact a Freemason. That he is a member of the Studholme Lodge 1591:


Tony Blair is a perfect example of a power hungry person who bridge all the different organizations. Blair is allegedly a member of Knights of Malta and he recently "converted" to Catholicism.

No wonder since Blair potentially could become the first President of the European Union. This was just one of the things that was ratified with the signing of the "Lisbon Treaty" despite the revolt over the Treaty of Lisbon among many of the Members of the European Parliament.

The pieces are in place and the European Super state Control Grid is slowly being assembled before our eyes.

With this in mind, I'm not sure that a "split" between two Christian factions: Catholic (Knights of Malta/Vatican) and Protestant (Freemasonry) is that very important, in regards to the ongoing "main agenda"... beyond the fact that this is interesting from a historical perspective.

By now I think we should be aware that the "elite" don't belong to a single order or organization, it's my belief that they cross over all the different fraternal, religious organizations and secret societies in order to achieve their goals.

Exactly what those goals are, is one of the many things we are trying to find out (exploring).

William F Mann - The Templar's Search for the One Bloodline, DNA, Sinclair, The Grail, & The Vikings