Islamic terror and the great deception 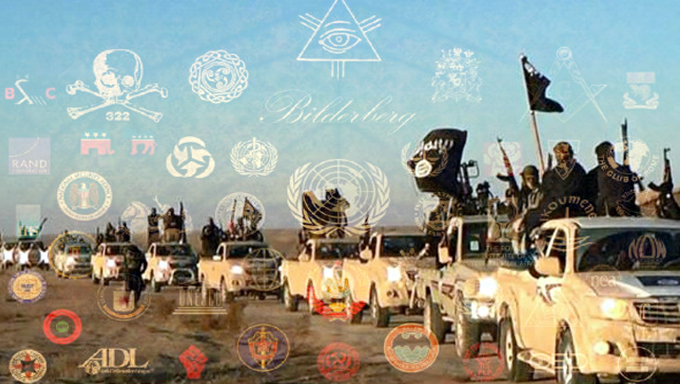 The unseen adepts who rule America also rule the world. They are masters at understanding human nature.

They have spent hundreds of years creating the public mindset which they manipulate in our generation with the most perfect precision. Words, phrases and thought patterns are a political science that triggers exact and predictable responses to political rhetoric.

The masses are programmed into a mental straightjacket and few will ever escape. Not more than a few thousand people in the entire world think their own thoughts and are alert to the nature and spirit of political anarchy that reigns as Western civilization. We have come to believe that chaos is order, that war is peace.

Islamic terrorism is a perfect example of their handiwork. It is the greatest deception of this age and is being used to deprive you of your sons and daughters, your wealth, your liberty and, if you are a Christian, your faith.

Islamists and the threat of Islamic terrorism are being used as a sort of controlled opposition by the elite power brokers and have been for many years — beginning at least in the 1950s when Kermit Roosevelt instigated the Iranian coup to overthrow the democratically elected prime minister of Iran, Mohammad Mosaddegh, on behalf of Big Oil. The U.S. and its allies have systematically and alternately armed and fought Islamists — often arming and fighting them at the same time, as now with the Islamic State — in order to keep the Middle East in turmoil and check any nation-state opposition to Saudi Arabia and Israel.

Americans have been brainwashed by constant fearmongering from CFR-controlled propagandists, also known as the mainstream media, to believe there are terrorists under every rock who are driven by a desire to kill us all because of our way of life. This is part of their great disinformation campaign.

How is it that the politicos almost always succeed in bringing people captive? People are led captive when their beliefs and, thus, their allegiances are reversed. All of life’s concerns are then reversed, from tradition to morality to institutions at every level of life. This means that such captivity is a saturation of mass deception, to the point of ignoring self-interest and going along with voluntary destruction.

I want to limit my examination to the conservative side of the problem because today’s pseudoconservatives/neoconservatives are particularly adept at leading astray large numbers of middle-class Americans, especially Christians, patriots and other good folks. Also, if not for the consistent acquiescence of Republican “conservatives” to the collectivist agenda, America would have retained its limited, constitutional Republic, even in this “sophisticated” day and age.

Note that even in a federal government dominated by a Republican supposedly conservative majority, the federal leviathan always grows in power, coupled together with New World Order. After all, it was Bush I who began the perpetual war under which we now labor. It began in Iraq and Kuwait in January 1991 and has not ended.

In all that time the war strategy has not changed. America has remained on a war footing with planes flying and military men (and women) patrolling one Middle East or African country or another, regardless of whether the president’s name was followed by an “R” or a “D.” It continued under Bill Clinton (who bombed Christians in Bosnia with even more fervor than he bombed aspirin factories in Khartoum and who sent troops to die in Somalia), Bush II (who expanded the war to Iraq and Pakistan and drone-bombed Somalia) and Barack Obama (who has continued it in Pakistan, Iraq and Somalia and spread it to Yemen, Libya and Syria).

Obama has lately acquiesced to public pressure — such as it was — and submitted an Authorization for Use of Military Force agreement to Congress in order to battle Islamic State or IS or ISIS or IL — whatever its nom du jour.