The deepest place on the planet may also hold the clues to the origin of life on Earth.

The discovery of microbial mats — bizarre-looking, filamentlike clumps of microorganisms — living off chemicals from altered rocks 35,803 feet beneath the surface of the Pacific Ocean comes from samples and video collected by an unmanned lander, part of movie director James Cameron’s mission to the bottom of the Mariana Trench. Researchers have speculated that a similar setup may have sparked the chemical steps that lead to life on Earth, and possibly elsewhere in the solar system. 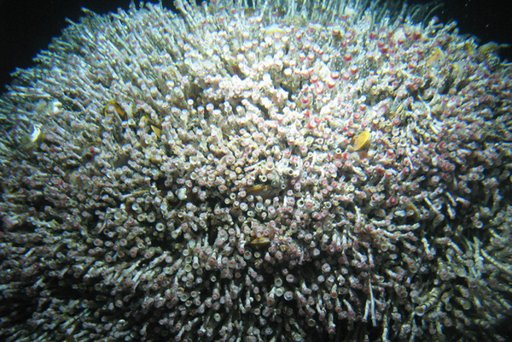 Researchers estimate that more than 14,000 tubeworms live in this ’bush’ discovered at an extremely rare hybrid hydrothermal vent — methane seep site in the deep sea.
"We do think that this chemistry could be the roots for metabolism," said Kevin Hand, an astrobiologist at the Jet Propulsion Laboratory (JPL) in Pasadena, Calif. "It could be the driving engine that leads to the emergence of life," he said. "Perhaps not just here, but also on worlds like Europa," an icy moon of Jupiter.

Cameron’s Deepsea Challenger expedition made dives to the New Britain Trench and the Mariana Trench in the southwestern Pacific Ocean between Jan. 31 and April 3, with one manned dive to Mariana’s Challenger Deep, the dark, flat pool that scientists now know houses a surprising array of life. A peek at results from the expedition were presented to a packed audience here Tuesday (Dec. 4) at the annual meeting of the American Geophysical Union. 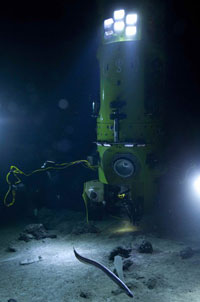 The filmmaker journeyed inside a steel sphere encased in foam — dubbed the Deepsea Challenger — built to withstand the crushing pressures below the ocean’s surface. The expedition traveled with two unmanned seafloor "landers" — large contraptions hoisted over the side of a ship and dropped to the seafloor. Once on the bottom, bait attached to the lander lured seafloor creatures to the craft, and a suite of instruments took samples, photographs and data.

When he emerged, Cameron told reporters the view was "bleak" and "looked like the moon." But scientists who examined data collected during the deep dives, both manned and unmanned, soon discovered there was life in the coldest, darkest sea.

Along with the discovery of thriving deep-sea mats, several new species swam by the expedition’s high-definition cameras and into its collection tubes. Scientists are now analyzing bacteria and other organisms brought back to the surface.

Giant, 7-inch-long amphipods, a shrimplike crustacean that may scavenge fallen logs in the trench,were trapped at nearly 7 miles below the surface in Challenger Deep and hauled back to the ship. Tests reveal the creatures contain compounds that help tissues and proteins function better at high pressure, including scyllo-inositol. The compound is identical to a drug used in clinical trials to break down the amyloid plaques associated with Alzheimer’s disease, said Doug Bartlett, a microbiologist at the Scripps Institution of Oceanography at UC San Diego.

Some 20,000 microbes from the trench are being picked over and will undergo genetic analysis, he said. There were also abundant numbers of xenophyophores, a giant amoeba that is among the largest individual cells in existence.

Read the full article at: cbsnews.com