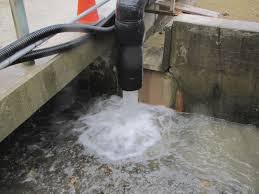 This is being done even though water radiation levels near Fukushima spiked to a brand new all-time record high just a few days ago. The radioactive material that is being released will enter our food chain and will potentially stay with us for decades to come. Fukushima is an environmental nightmare that never seems to end, but the mainstream media in the United States decided to pretty much stop talking about it long ago. So don’t expect the big news networks to make a big deal out of the fact that Japan is choosing to use the Pacific Ocean as a toilet for their nuclear waste. But even though they aren’t talking about it, that doesn’t mean that radioactive material from Fukushima is not seriously affecting the health of millions of people all over the planet.

Tokyo Electric Power Co. began dumping groundwater from the Fukushima No. 1 nuclear plant into the Pacific on Wednesday, in a bid to manage the huge amounts of radioactive water that have built up at the complex.

The utility, which says the water discharged is within legal radiation safety limits, has been fighting a daily battle against contaminated water since Fukushima No. 1 was decimated by the earthquake and tsunami of March 2011.

Tepco said 560 tons of groundwater captured and stored before it entered reactor building basements was to be released Wednesday, using a bypass system that funnels it toward the ocean after checking for radiation levels.

Using the bypass, Tepco hopes to divert an average of100 tons of untainted groundwater a day into the ocean.

Tepco is assuring us that the radioactive water that is being released is within “legal radiation safety limits”.