Jet in near miss with UFO

Jan 6, 2014 Source: telegraph.co.uk
An airline pilot reports a close encounter with a UFO near Heathrow Airport which has baffled the aviation authorities 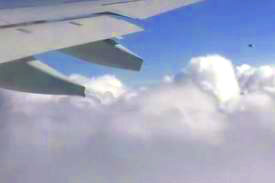 It was certainly a close encounter, but with precisely what remains a mystery.

An airline pilot has reported a near miss in which a “rugby ball”-shaped UFO passed within a few feet of his passenger jet while flying near Heathrow Airport.

The captain told the aviation authorities who have investigated the incident that he was certain the object was going to crash into his aircraft and ducked as it headed towards him.

The investigation has been unable to establish any earthly identity for the mysterious craft, which left the aircrew with no time to take evasive action.

The incident occurred while the A320 Airbus was cruising at 34,000ft, around 20 miles west of the airport, over the Berkshire countryside.

The captain spotted the object travelling towards the jet out of a left hand side, cockpit window, apparently heading directly for it.

A report into the incident states: “He was under the apprehension that they were on collision course with no time to react. His immediate reaction was to duck to the right and reach over to alert the FO (First Officer); there was no time to talk to alert him.”

It adds: “The Captain was fully expecting to experience some kind of impact with a conflicting aircraft.”

He told investigators he believes the object passes “within a few feet” above the jet.

He described it as being “cigar/rugby ball like” in shape, bright silver and apparently “metallic” in construction.

Once he had composed himself, he checked the aircraft’s instruments and contacted air traffic controllers to report the incident. However, there was no sign of the mystery craft.

Read the full article at: telegraph.co.uk