Ed comment: Could this rise in "anti-semitism" have something to do with the promotion of an open their border policy, pushing mass migration, letting in Muslims and then advocating for the displacement and destruction of the European people and their nations? Nah, it remains a completely mysteriously. Once again anti-semitism rise out of the blue, for no reason whatsoever.

Motivated by what they described as rising anti-Semitism in Europe, members of a Congressional bipartisan task force introduced legislation Friday that aims to increase Washington’s monitoring of anti-Jewish incidents and the steps taken by European governments to combat them.

While much of the nation’s focus was trained on Hurricane Matthew smashing into the southeastern seaboard, Democratic representatives Nita Lowey, Steve Israel, Eliot Engel and Ted Deutch joined Republicans Chris Smith, Ileana Ros-Lehtinen, Kay Granger and Peter Roskam — all co-chairs of the House of Representatives Bipartisan Taskforce for Combating Anti-Semitism — in introducing the Combating European Anti-Semitism Act of 2016.

In 2004, then-president George W. Bush signed into law the Global Anti-Semitism Review Act, which provides the legal foundation for an annual State Department report documenting anti-Semitism around the world. Over a decade later, in the face of rising anti-Semitism in Europe, the House of Representatives unanimously passed a resolution in November 2015 calling on the secretary of state to continue robust reporting on anti-Semitism.

After that resolution, however, anti-Semitism continued to flourish.

“It’s shocking that in the 21st century, anti-Semitism is gaining strength across Europe. From taunts and threats on the street; to violent attacks in schools and synagogues; to governments amplifying anti-Semitic voices and messages, such as leaders in Hungary giving a prestigious State award to anti-Semitic writer Zsolt Bayer, many European Jews are being forced to reconsider whether there is still a future for them in their countries,” the bill’s sponsors wrote in a statement Friday.

“This is unacceptable, and we will continue to call on leaders across Europe to speak out against this growing problem, strengthen partnerships with Jewish communities to help them develop safety standards, and foster cultures that respect diversity and inclusion of all minority groups, including Jews.”

The bill will amend the International Religious Freedom Act of 1998 to include a new paragraph discussing anti-Semitism in Europe, adding mandatory reporting on “the security challenges and needs of European Jewish communities and European law enforcement agencies” in countries in which “verbal or physical threats or attacks are particularly significant against Jewish persons, places of worship, schools, cemeteries, and other religious institutions.”

It also encourages the US to “partner with European law enforcement agencies and civil society groups regarding the sharing of information and best practices to combat anti-Semitic incidents in Europe,” and to encourage European governments to pursue educational initiatives to combat anti-Jewish sentiment and adopt a working definition of anti-Semitism.

“Effectively confronting this problem requires a better understanding of its scope and depth. This bill would require the Administration to continue taking a hard look at anti-Semitism in Europe, providing a thorough assessment of trends and outlining what the United States and our partners are doing to meet this challenge,” they wrote. “That way, we’ll have the best information available as we work to root out this pernicious threat and ensure that the commitment ‘never again’ remains a reality.”

In the bill, legislators noted that “during the past decade, there has been a steady increase in anti-Semitic incidents in Europe, resulting in European Jews being the targets of physical and verbal harassment and even lethal terrorist attacks, all of which has eroded personal and communal security and the quality of daily Jewish life.”

The legislation also noted a linkage between anti-Zionism and anti-Semitism, complaining that the former “has at times devolved into anti-Semitic attacks, prompting condemnation from many European leaders.”

The bill contains a “sense of Congress” section that states that “it is in the national interest of the United States to combat anti-Semitism at home and abroad,” and that “anti-Semitism is a challenge to the basic principles of tolerance, pluralism, and democracy, and the shared values that bind Americans and Europeans together.”

The representatives emphasized what they described as “an urgent need to ensure the safety and security of European Jewish communities, including synagogues, schools, cemeteries, and other institutions.” They called on both the US and international organizations to continue to document and speak out against anti-Semitic incidents. 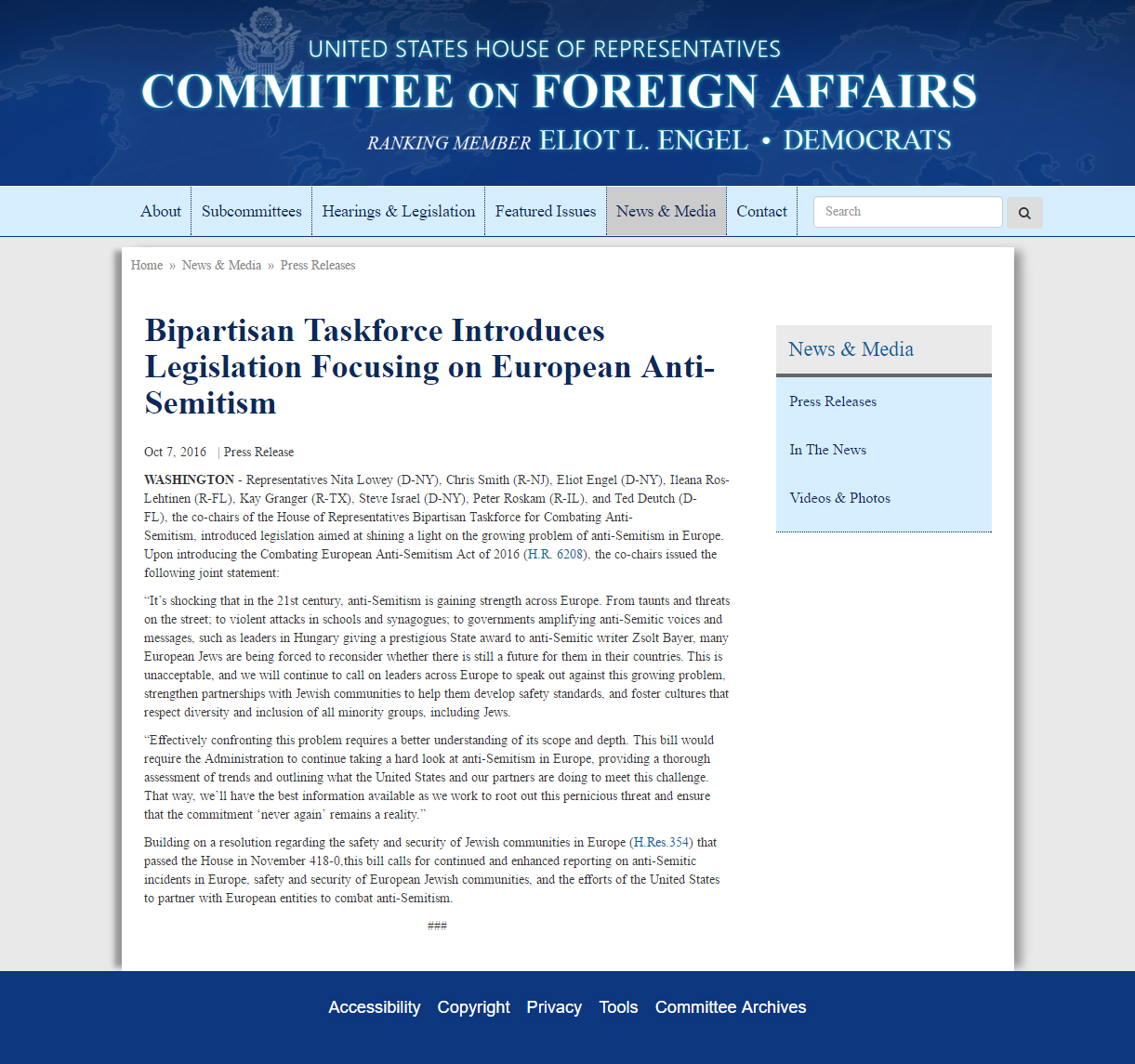