Judea Declares War on Germany: A Critical Look at the Holocaust and WWII

Judea Declares War on Germany" was the front-page headline of the March 24, 1933 edition of the British newspaper Daily Express. It was the headline for an article that announced a boycott against German goods. The rest of the mass media did not describe the boycott as a declaration of war. The Nizkor Project says the attempted boycott was declared in response to the anti-Semitic actions by Nazi Germany under Adolf Hitler. Three days after the headline was published, a meeting of representatives of British Jews, the Jewish Board of Deputies, denied that there was a boycott against Germany. 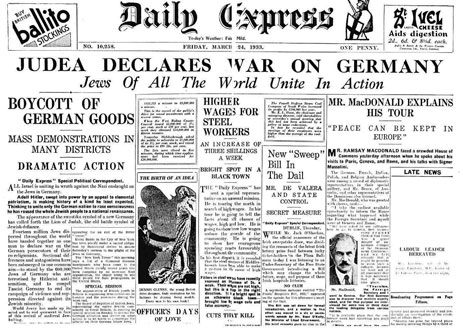 Image and text from: Judea Declares War on Germany (Wikipedia)