Aug 28, 2011 Source: telegraph.co.uk
Archaeologists searching for King Arthur’s round table have found a "circular feature" beneath the historic King’s Knot in Stirling.

The King’s Knot, a geometrical earthwork in the former royal gardens below Stirling Castle, has been shrouded in mystery for hundreds of years.
Though the Knot as it appears today dates from the 1620s, its flat-topped central mound is thought to be much older.

Writers going back more than six centuries have linked the landmark to the legend of King Arthur. 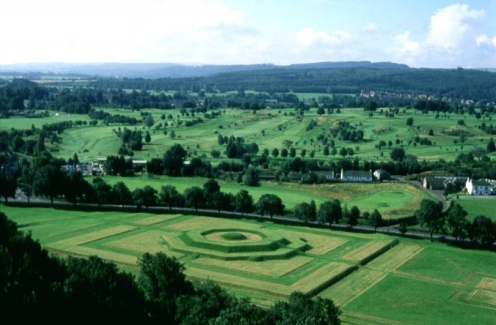 The King’s Knot at Stirling Castle. (Image: Patrick Taylor)
Archaeologists from Glasgow University, working with the Stirling Local History Society and Stirling Field and Archaeological Society, conducted the first ever non-invasive survey of the site in May and June in a bid to uncover some of its secrets.

Their findings were show there was indeed a round feature on the site that pre-dates the visible earthworks.

Historian John Harrison, chair of the SLHS, who initiated the project, said: "Archaeologists using remote-sensing geophysics, have located remains of a circular ditch and other earth works beneath the King’s Knot.

"The finds show that the present mound was created on an older site and throws new light on a tradition that King Arthur’s Round Table was located in this vicinity."

Stories have been told about the curious geometrical mound for hundreds of years -- including that it was the Round Table where King Arthur gathered his knights. 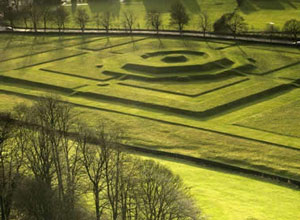 Around 1375 the Scots poet John Barbour said that "the round table" was south of Stirling Castle, and in 1478 William of Worcester told how "King Arthur kept the Round Table at Stirling Castle".

Sir David Lindsay, the 16th century Scottish writer, added to the legend in 1529 when he said that Stirling Castle was home of the "Chapell-royall, park, and Tabyll Round".

It has also been suggested the site is partly Iron Age or medieval, or was used as a Roman fort.

Extensive work on the royal gardens was carried out in the early 17th century for Charles I, when the mound is thought to have taken its current form.

The first known record of the site being called the King’s Knot is from 1767, by which time it was being leased for pasture. 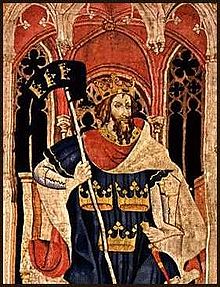 Locals refer to the grassy earthworks as the "cup and saucer", but aerial photographs taken in 1980 showed three concentric ditches beneath and around the King’s Knot mound, suggesting an earthwork monument had preceded it.

The new survey -- funded by Historic Scotland and Stirling City Heritage Trust -- used the latest scientific techniques to showing lost structures and features up to a metre below the ground.

It also revealed a series of ditches south of the main mound, as well as remains of buildings, and more recent structures, including modern drains which appear at the northern end of the gardens.

Mr Harrison, who has studied the King’s Knot for 20 years, said: "It is a mystery which the documents cannot solve, but geophysics has given us new insights.

Read the full article at: telegraph.co.uk


The Structures of Arthurian Legend: The Round Table
From: KingArthursKnights.com

Accounts differ about the origin of the Round Table, at which Arthur’s knights met to tell of their deeds and from which they invariably set forth in search of further adventures. The Norman chronicler Wace was the first to mention it, in his Roman de Brut of 1155. There, he simply says that Arthur devised the idea of a round table to prevent quarrels between his barons over the question of precedence. Another writer, Layamon, adapted Wace’s account and added to it, describing a quarrel between Arthur’s lords which was settled by a Cornish carpenter who, on hearing of the problem, created a portable table which could seat 1600 men. Both Wace and Layamon refer to Breton story-tellers as their source for this and there is little reason to doubt them. This being the case, the origins of the table may well date back to Celtic times, and even be traceable to the age of Arthur himself. In the later medieval stories, however, it is Merlin who is responsible for the creation of the table. Malory, taking up the theme and developing it, made it the centre-piece of his epic re-telling. 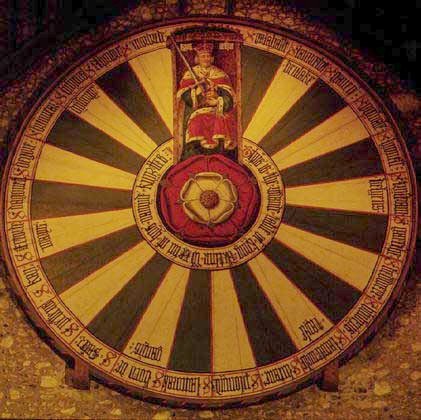 The design displayed on the Winchester Round Table dates from 1552 and was made to impress the visiting Emperor Charles V.

The large wooden table in the Great Hall at Winchester dates from no earlier than the thirteenth century, when it may have been made at the command of King Edward III, who was considering a revival of the Round Table as an order of chivalry. In the end, he dropped the idea and created the Order of Garter instead, but the table remains. Made of oak, it is 18 feet across and nearly 3 inches thick. It weighs nearly 1.25 tons. 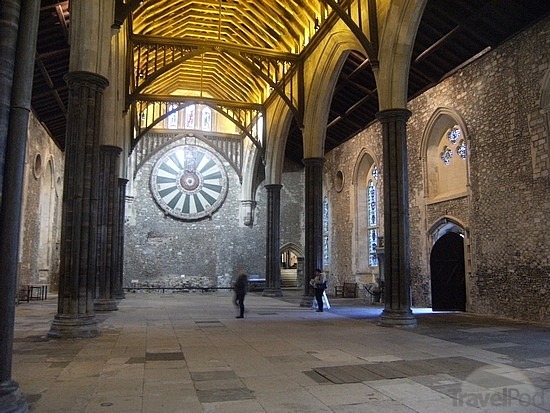 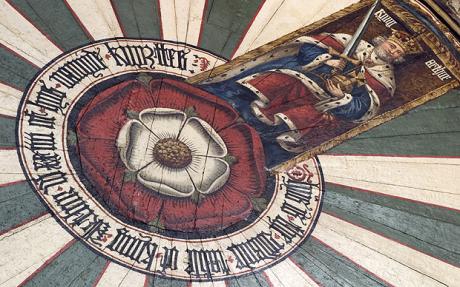