Feb 27, 2008 Source: breitbart.com
Ed comment: Worth noting is that William F. Buckley Jr. was a Knights of Malta and a member of Council on Foreign Relations, he was also a Bilderberg Group attendee, as detailed by nndb.com. 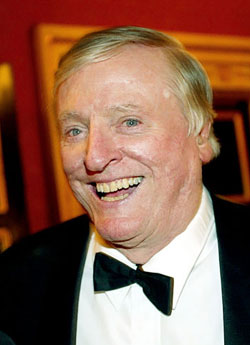 William F. Buckley Jr., the erudite Ivy Leaguer and conservative herald who showered huge and scornful words on liberalism as he observed, abetted and cheered on the right's post-World War II rise from the fringes to the White House, died Wednesday. He was 82.

His assistant Linda Bridges said Buckley was found dead by his cook at his home in Stamford, Conn. The cause of death was unknown, but he had been ill with emphysema, she said.

Editor, columnist, novelist, debater, TV talk show star of "Firing Line," harpsichordist, trans-oceanic sailor and even a good-natured loser in a New York mayor's race, Buckley worked at a daunting pace, taking as little as 20 minutes to write a column for his magazine, the National Review.

Yet on the platform he was all handsome, reptilian languor, flexing his imposing vocabulary ever so slowly, accenting each point with an arched brow or rolling tongue and savoring an opponent's discomfort with wide-eyed glee.

"I am, I fully grant, a phenomenon, but not because of any speed in composition," he wrote in The New York Times Book Review in 1986. "I asked myself the other day, `Who else, on so many issues, has been so right so much of the time?' I couldn't think of anyone."

Buckley had for years been withdrawing from public life, starting in 1990 when he stepped down as top editor of the National Review. In December 1999, he closed down "Firing Line" after a 23-year run, when guests ranged from Richard Nixon to Allen Ginsberg. "You've got to end sometime and I'd just as soon not die onstage," he told the audience.

"For people of my generation, Bill Buckley was pretty much the first intelligent, witty, well-educated conservative one saw on television," fellow conservative William Kristol, editor of the Weekly Standard, said at the time the show ended. "He legitimized conservatism as an intellectual movement and therefore as a political movement."

Fifty years earlier, few could have imagined such a triumph. Conservatives had been marginalized by a generation of discredited stands—from opposing Franklin Roosevelt's New Deal to the isolationism which preceded the U.S. entry into World War II. Liberals so dominated intellectual thought that the critic Lionel Trilling claimed there were "no conservative or reactionary ideas in general circulation."

Buckley founded the biweekly magazine National Review in 1955, declaring that he proposed to stand "athwart history, yelling `Stop' at a time when no one is inclined to do so, or to have much patience with those who urge it." Not only did he help revive conservative ideology, especially unbending anti-Communism and free market economics, his persona was a dynamic break from such dour right-wing predecessors as Sen. Robert Taft.

Although it perpetually lost money, the National Review built its circulation from 16,000 in 1957 to 125,000 in 1964, the year conservative Sen. Barry Goldwater was the Republican presidential candidate. The magazine claimed a circulation of 155,000 when Buckley relinquished control in 2004, citing concerns about his mortality, and over the years the National Review attracted numerous young writers, some who remained conservative (George Will, David Brooks), and some who didn't (Joan Didion, Garry Wills).

"I was very fond of him," Didion said Wednesday. "Everyone was, even if they didn't agree with him."

Born Nov. 24, 1925, in New York City, William Frank Buckley Jr. was the sixth of 10 children of a a multimillionaire with oil holdings in seven countries. The son spent his early childhood in France and England, in exclusive Roman Catholic schools.

His prominent family also included his brother James, who became a one-term senator from New York in the 1970s; his socialite wife, Pat, who died in April 2007; and their son, Christopher, a noted author and satirist ("Thank You for Smoking").

A precocious controversialist, William was but 8 years old when he wrote to the king of England, demanding payment of the British war debt.

After graduating with honors from Yale in 1950, Buckley married Patricia Alden Austin Taylor, spent a "hedonistic summer" and then excoriated his alma mater for what he regarded as its anti-religious and collectivist leanings in "God and Man at Yale," published in 1951.

Buckley spent a year as a low-level agent for the Central Intelligence Agency in Mexico, work he later dismissed as boring.

With his brother-in-law, L. Brent Bozell, Buckley wrote a defense of Sen. Joseph McCarthy in 1954, "McCarthy and His Enemies." While condemning some of the senator's anti-communist excesses, the book praised a "movement around which men of good will and stern morality can close ranks."

In 1960, Buckley helped found Young Americans for Freedom, and in he was among the founders of the Conservative Party in New York. Buckley was the party's candidate for mayor of New York in 1965, waging a campaign that was in part a lark—he proposed an elevated bikeway on Second Avenue—but that also reflected a deep distaste for the liberal Republicanism of Mayor John V. Lindsay. Asked what he would do if he won, Buckley said, "I'd demand a recount."

He wrote the first of his successful spy thrillers, "Saving the Queen," in 1976, introducing Ivy League hero Blackford Oakes. Oakes was permitted a dash of sex—with the Queen of England, no less—and Buckley permitted himself to take positions at odds with conservative orthodoxy. He advocated the decriminalization of marijuana, supported the treaty ceding control of the Panama Canal and came to oppose the Iraq war.

Buckley also took on the archconservative John Birch Society, a growing force in the 1950s and 1960s. "Buckley's articles cost the Birchers their respectability with conservatives," Richard Nixon once said. "I couldn't have accomplished that. Liberals couldn't have, either."

Although he boasted he would never debate a Communist "because there isn't much to say to someone who believes the moon is made of green cheese," Buckley got on well with political foes. His friends included such liberals as John Kenneth Galbraith and Arthur M. Schlesinger, Jr., who despised Buckley's "wrathful conservatism," but came to admire him for his "wit, his passion for the harpsichord, his human decency, even for his compulsion to epater the liberals."

Buckley was also capable of deep and genuine dislikes. In a 1968 television debate, when left-wing novelist and critic Gore Vidal called him a "pro-war-crypto-Nazi," Buckley snarled an anti-gay slur and threatened to "sock you in your ... face and you'll stay plastered." Their feud continued in print, leading to mutual libel suits that were either dismissed (Vidal's) or settled out of court (Buckley's).

The National Review defended the Vietnam War, opposed civil rights legislation and once declared that "the White community in the South is entitled to take such measures as are necessary to prevail." Buckley also had little use for the music of the counterculture, once calling the Beatles "so unbelievably horrible, so appallingly unmusical, so dogmatically insensitive to the magic of the art, that they qualify as crowned heads of antimusic."

The National Review could do little to prevent Goldwater's landslide defeat in 1964, but as conservatives gained influence so did Buckley and his magazine. The long rise would culminate in 1980 when Buckley's good friend, Ronald Reagan, was elected president. The outsiders were now in, a development Buckley accepted with a touch of rue.

"It's true. I had much more fun criticizing than praising," he told the Washington Post in 1985. "I criticize Reagan from time to time, but it's nothing like Carter or Johnson."

Buckley's memoir about Goldwater, "Flying High," was coming out this spring, and his son said he was working on a book about Reagan.

Buckley so loved a good argument—especially when he won—that he compiled a book of bickering in "Cancel Your Own Goddam Subscription," published in 2007 and featuring correspondence with the famous (Nixon, Reagan) and the merely annoyed.

"Mr. Buckley," one non-fan wrote in 1967, "you are the mouthpiece of that evil rabble that depends on fraud, perjury, dirty tricks, anything at all that suits their purposes. I would trust a snake before I would trust you or anybody you support."

Responded Buckley: "What would you do if I supported the snake?"