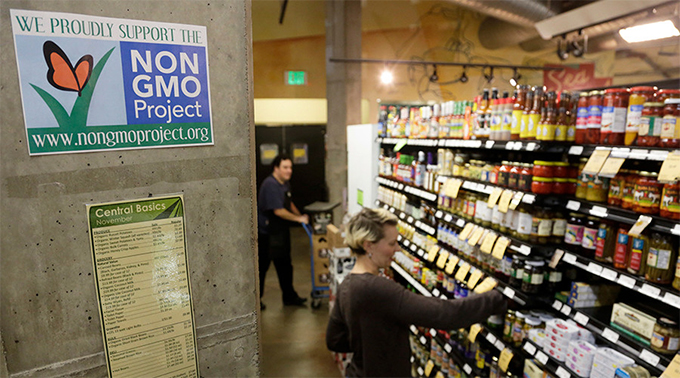 US Senate Democrats have offered an alternative GMO labeling bill that would require manufacturers to disclose the presence of GMOs to consumers, while still allowing them to choose how to comply with the law.

“Rather than blocking consumers’ access to information they want, the US Senate should move forward with a solution that works for business and consumers alike,” said Senator Jeff Merkley (D, Oregon) the lead sponsor of the bill which was introduced on Wednesday.

Merkley’s Biotechnology Food Labeling and Uniformity Act would allow American consumers to see whether a food had been prepared with genetically modified ingredients on the Nutrition Fact Panel, reported the Hill.

Manufacturers would be given a choice of four ways to display the “fact:” a parenthesis to indicate the food is genetically modified; an asterisk with an explanation at the bottom of the ingredients list; the catchall phrase “produced with genetic engineering,” or the FDA would develop a symbol to disclosure the presence of GM ingredients.

“None of these options would require front panel disclosures or “warning” statements intending to disparage GM ingredients,” said Merkley (D, Oregon) in a press release.

The new bill comes just a day after the Senate Agricultural Committee passed a Republican-backed bill that would establish a voluntary federal standard over GMO labeling. The proposed federal legislation would amend the Agricultural Marketing Act of 1946 to require the Secretary of Agriculture to establish a national voluntary labeling standard for bioengineered foods.

According to pro-labeling advocates the bill, dubbed the ‘Dark Act’ would effectively ban the labeling of food containing genetically modified ingredients, despite the fact that 90 percent of Americans want to know if their food contains them.

The sudden activity in Congress over labeling is to head off a Vermont law, due to go into effect July 1, which would require food manufacturers to label whether their product contained GMOs.

Baden-Mayer said the federal government could have passed legislation a long time ago.

“Congressman Dennis Kucinich started putting legislation together back in the late 1990’s on this issue. Congress has never acted. President Obama promised to label GMO’s, he never did,” said Baden-Mayer. “The states stepped in to give the 9 out 10 people who say they want to know about GMO’s in their food. To give all of us our right to know.”

Food manufacturers complain the state laws would create a patchwork of legislation that would increase their costs which they would be forced to pass on to consumers. Estimates floated by Republicans are that would increase food bills by $1,050. Advocates argue that all state laws that are passed have the same demand over GMO labeling, and 20 additional states are considering labelling regulations, and adding a few words won’t increase costs.

“I am sensitive to [the argument of] a patchwork, it is tough for a company which sells to 50 states, 50 sets of regulations. I am sympathetic but it is a BS excuse to subvert the idea of transparency,” said Ryan. “The reality of it is we need a national law that shows and has transparency that labels GMOs, we need to be strong on this. If you are an environmentalist, you care about the soil, you care about the crops, you need to be for this.”

Joining Merkley in sponsoring the new bill is Senator Patrick Leahy (D, Vermont). He said the bill would give consumers a uniform federal mandatory label and would give food producers a choice how to comply with a mandatory federal label.

“I believe that until a mandatory national label like this is enacted, Congress should not preempt state laws like Vermont’s Act 120,” said Senator Leahy.