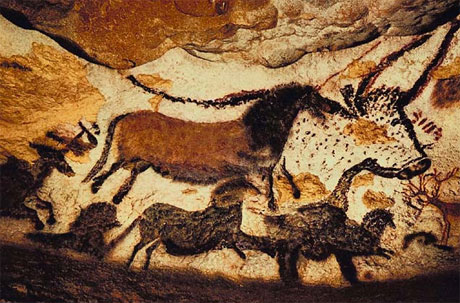 Lascaux is the setting of a complex of caves in southwestern France famous for its Paleolithic cave paintings. The original caves are located near the village of Montignac, in the Dordogne département. They contain some of the most well-known Upper Paleolithic art. These paintings are estimated to be 16,000 years old. 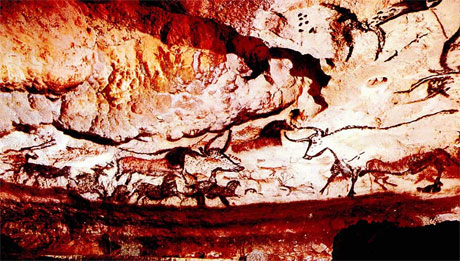 he cave was closed to the public in 1963 in order to preserve the art. After the cave was closed, the paintings were restored to their original state, and are now monitored on a daily basis. Rooms in the cave include The Great Hall of the Bulls, the Lateral Passage, the Shaft of the Dead Man, the Chamber of Engravings, the Painted Gallery, and the Chamber of Felines. 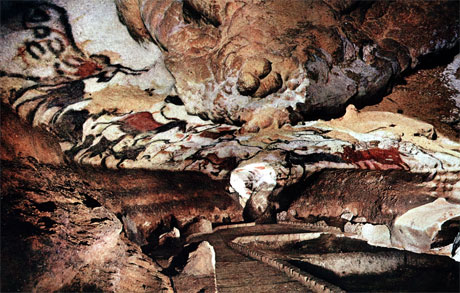 The cave contains nearly 2,000 figures, which can be grouped into three main categories -- animals, human figures and abstract signs. Notably, the paintings contain no images of the surrounding landscape or the vegetation of the time. Most of the major images have been painted onto the walls using mineral pigments although some designs have also been incised into the stone. Many images are too faint to discern, while others have deteriorated. 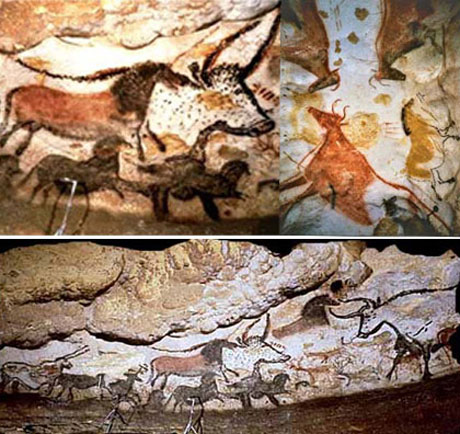 Over 900 can be identified as animals, and 605 of these have been precisely identified. There are also many geometric figures. Of the animals, equines predominate, with 364 images. There are 90 paintings of stags. Also represented are cattle and bison, each representing 4-5% of the images. A smattering of other images include seven felines, a bird, a bear, a rhinoceros, and a human. Among the most famous images are four huge, black bulls or aurochs in the Hall of the Bulls. There are no images of reindeer, even though that was the principal source of food for the artists. 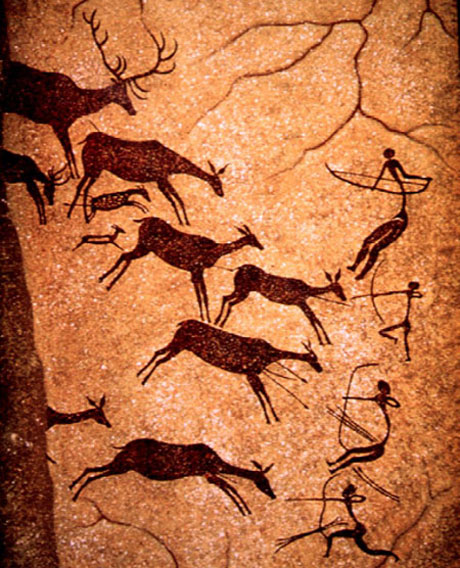 The most famous section of the cave is The Great Hall of the Bulls where bulls, equines and stags are depicted. But it is the four black bulls that are the dominant figures among the 36 animals represented here. One of the bulls is 17 feet (5.2 m) long -- the largest animal discovered so far in cave art. Additionally, the bulls appear to be in motion. 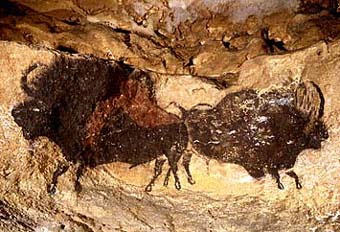 A painting referred to as "The Crossed Bison" and found in the chamber called the Nave is often held as an example of the skill of the Paleolithic cave painters. The crossed hind legs show the ability to use perspective in a manner that wasn't seen again until the 15th century. 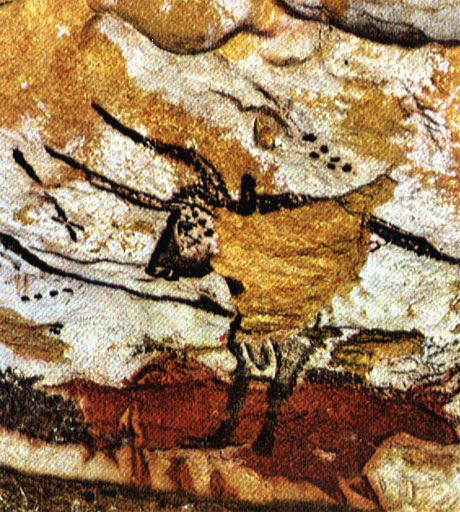 In recent years new reseach has suggested that the Lascaux paintings may incorporate prehistoric star charts. Dr Michael Rappenglueck of the University of Munich argues that some of the non-figurative dot clusters and dots within some of the figurative images correlate with the constellations of Taurus, The Pleiades and the grouping known as the "Summer Triangle". Based on her own study of the astronomical significance of Bronze Age petroglyphs in the Vallée des Merveilles and her extensive survey of other prehistoric cave painting sites in the region -- most of which appear to have been specifically selected because the interiors are illuminated by the setting sun on the day of the winter solstice -- French researcher Chantal Jègues-Wolkiewiez has further proposed that the gallery of figurative images in the Great Hall represents an extensive star map and that key points on major figures in the group correspond to stars in the main constellations as they appeared in the Paleolithic. 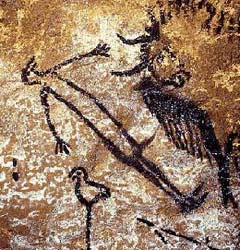