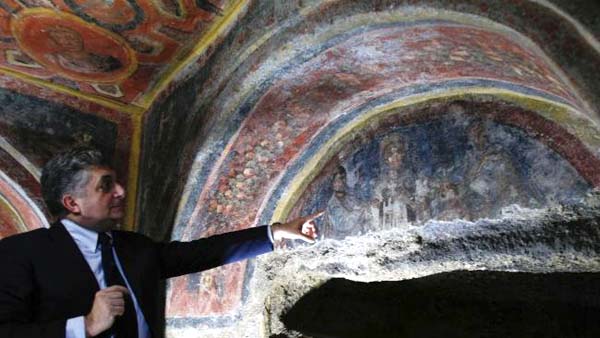 Twenty-first century laser technology has opened a window into the early days of the Catholic Church, guiding researchers through the dank, musty catacombs beneath Rome to a startling find: the first known icons of the apostles Peter and Paul.

Vatican officials unveiled the paintings Tuesday, discovered along with the earliest known images of the apostles John and Andrew in an underground burial chamber beneath an office building on a busy street in a working-class Rome neighborhood.

The images, which date from the second half of the 4th century, were uncovered using a new laser technique that allows restorers to burn off centuries of thick white calcium carbonate deposits without damaging the brilliant dark colors of the paintings underneath. 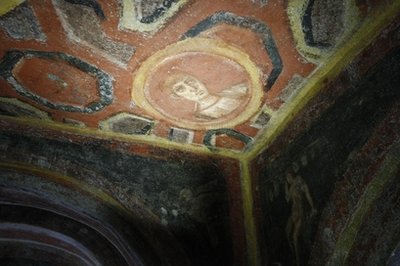 A spotlight illuminates the icon of the Apostle John discovered with other paintings in a catacomb located under a modern office building in a residential neighborhood of Rome, Tuesday, June, 22, 2010. (AP Photo/Pier Paolo Cito) 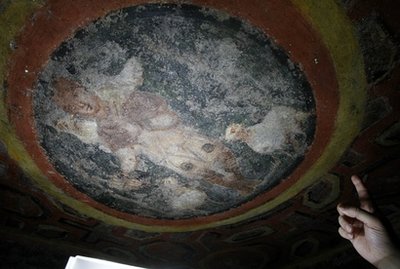 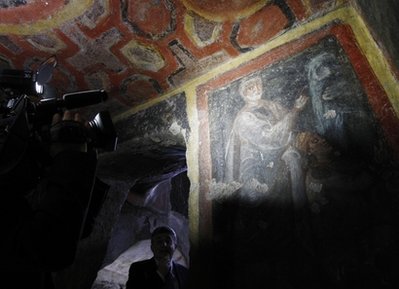 A cameraman films the discoveries. (AP Photo/Pier Paolo Cito)
The technique could revolutionize the way restoration work is carried out in the miles (kilometers) of catacombs that burrow under the Eternal City where early Christians buried their dead.

The icons were discovered on the ceiling of a tomb of an aristocratic Roman woman at the Santa Tecla catacomb, near where the remains of the apostle Paul are said to be buried.

Rome has dozens of such burial chambers and they are a major tourist attraction, giving visitors a peek into the traditions of the early church when Christians were often persecuted for their beliefs. Early Christians dug the catacombs outside Rome’s walls as underground cemeteries, since burial was forbidden inside the city walls and pagan Romans were usually cremated.

The art that decorated Rome’s catacombs was often simplistic and symbolic in nature. The Santa Tecla catacombs, however, represent some of the earliest evidence of devotion to the apostles in early Christianity, Vatican officials said.

"The Christian catacombs, while giving us value with a religious and cultural patrimony, represent an eloquent and significant testimony of Christianity at its origin," said Monsignor Giovanni Carru, the No. 2 in the Vatican’s Pontifical Commission of Sacred Archaeology, which maintains the catacombs.

Last June, the Vatican announced the discovery of the icon of Paul at Santa Tecla, timing the news to coincide with the end of the Vatican’s year of St. Paul. Pope Benedict XVI also said tests on bone fragments long attributed to Paul "seemed to confirm" that they did indeed belong to the Roman Catholic saint.

On Tuesday, Vatican archaeologists announced the image of Paul was not found in isolation, but was part of a square ceiling painting that also included icons of three other apostles — Peter, John and Andrew — surrounding an image of Christ as the Good Shepherd.

"They are the first icons. These are absolutely the first representations of the apostles," said Fabrizio Bisconti, the superintendent of archaeology for the catacombs.

Bisconti spoke from inside the intimate burial chamber, its walls and ceilings covered with paintings of scenes from the Old Testament, including Daniel in the lion’s den and Abraham and the sacrifice of Isaac. Once inside, visitors see the loculi, or burial chambers, on three sides.

But the gem is on the ceiling, where the four apostles are painted inside gold-rimmed circles against a red-ochre backdrop. The ceiling is also decorated with geometric designs, and the cornices feature images of naked youths.

Chief restorer Barbara Mazzei noted there were earlier known images of Peter and Paul, but these were depicted in narratives. The images in the catacomb — with their faces in isolation, encircled with gold and affixed to the four corners of the ceiling painting — are devotional in nature and as such represent the first known icons.

"The fact of isolating them in a corner tells us it’s a form of devotion," she said. "In this case, saints Peter and Paul, and John and Andrew are the most antique testimonies we have."

In addition, the images of Andrew and John show much younger faces than are normally depicted in the Byzantine-inspired imagery most often associated with the apostles, she said. 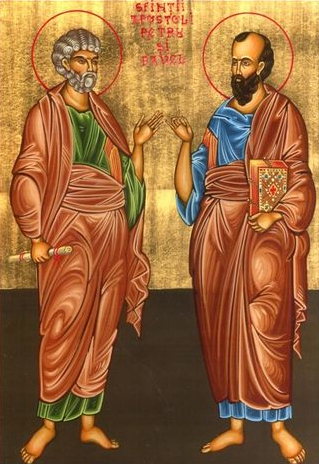 "Saints Peter and Paul" by Master Iconographer Nicusor Dumitru
The Vatican’s Sacred Archaeology office oversaw the two-year $73,650 (euro60,000) project, which for the first time used lasers to restore frescoes in catacombs, where the damp air makes the procedure particularly difficult.

In this case, the small burial chamber at the end of the catacomb was encased in up to two inches (five centimeters) of calcium carbonate. Restoration using previous techniques would have meant scraping away the buildup by hand, leaving a filmy layer on top so as not to damage the painting underneath.

Using the laser technique, restorers were able to sear off all the deposits by setting the laser to burn only on the white of the calcium carbonate; the laser’s heat stopped when it reached a different color. Researchers then easily chipped off the seared material, revealing the brilliant ochre, black, green and yellow underneath, Mazzei said.

Similar technology has been used on statues, particularly metallic ones damaged by years of outdoor pollution, she said. However, the Santa Tecla restoration marked the first time lasers had been adapted for use in the dank interiors of catacombs.

Many of Rome’s catacombs are open regularly to the public. However, the Santa Tecla catacombs will be open only on request to limited groups to preserve the paintings, she said.

Laird Scranton - The Cosmological Plan & The Origins of Myth and Symbol