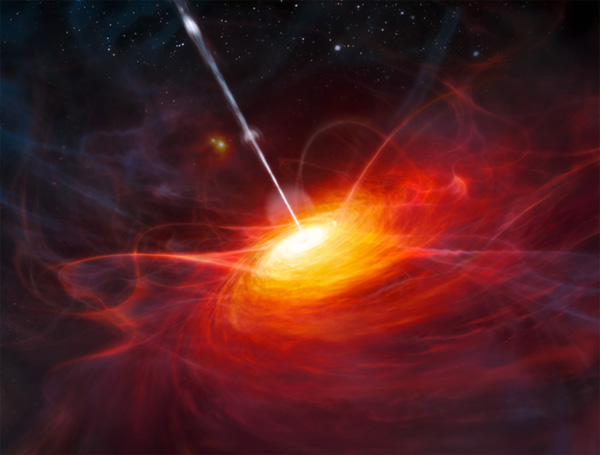 The quasar ULAS J1120+0641: Scientists measured the light from distant quasars for the ’signatures’ of metal atoms in between us and the distant galactic nuclei - they found that the measurements were different from similar ones on Earth

The laws of physics may not be as set in stone as previously imagined.
One of the laws of nature seems to vary depending on where in the universe you are, research suggests.

The new analysis of data from Hawaii’s Keck telescope and Chile’s Extremely Large Telescope, could have profound implications for our understanding of the universe.

The ’constancy’ of physics is one of the most cherished principles in science - but the scientists say that the ’laws’ we know may be the galactic equivalent of ’local by-laws’ and things may work quite differently elsewhere.

The discovery - if true - violates one of the underlying principles of Einstein’s theory of General Relativity, and has profound implications for our understanding of space and time.

The findings could mean that the universe is far bigger than we thought - possibly even infinite.

It also means that in other parts of the universe, the laws of physics might be hostile to life - whereas in our small part of it, they seem fine-tuned to supporting it.

The researchers looked at light from distant quasars - huge, bright objects that outshine their host galaxies - to see how the light was absorbed by metallic atoms such as chromium, iron, nickel and zinc on its billion-year journey to us.

The researchers looked at 300 distant galaxies. The experiment found that the atoms in space behaved differently from ones on earth.

’The discovery, if confirmed, has profound implications for our understanding of space and time and violates one of the fundamental principles underlying Einstein’s General Relativity theory,’ Dr King added. 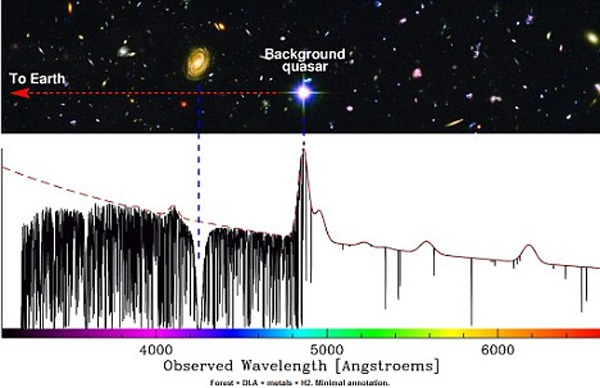 The scientists used distant quasars - huge, bright galactic nuclei - to ’illuminate’ metal atoms in between them and earth. Analysing the light found that they behaved differently from atoms on Earth

The first hints that alpha might not be constant came a decade ago when Professor John Webb and other colleagues at UNSW and elsewhere, analysed observations from the Keck Observatory, in Hawaii. Those observations were restricted to one broad area in the sky.

However, now Webb and colleagues have doubled the number of observations and measured the value of alpha in about 300 distant galaxies, all at huge distances from Earth, and over a much wider area of the sky.

’Such violations are actually expected in some more modern ‘Theories of Everything’ that try to unify all the known fundamental forces, said Professor Flambaum.

’The smooth continuous change in alpha may also imply the Universe is much larger than our observable part of it, possibly infinite.’

’Another currently popular idea is that many universes exist, each having its own set of physical laws,’ Dr Murphy said. ’Even a slight change in the laws of Nature means they weren’t ‘set in stone’ when our Universe was born.

’The laws of Nature you see may depend on your "space-time address" - when and where you happen to live in the Universe.’

Professor Webb said these new findings also offer a very natural explanation for a question that puzzled scientists for decades - why do the laws of physics seem to be so finely-tuned for the existence of life?
’The answer may be that other regions of the Universe are not quite so favourable for life as we know it, and that the laws of physics we measure in our part of the Universe are merely ‘local by-laws’, in which case it is no particular surprise to find life here,’ he said.