Ok I know what you are thinking: An article on Elenin AGAIN? Yes, I’m sorry but I find this evidence so thrilling that I had to share it with you. It has been circulating the Internet for a while now, yet I lost track of it and recently stumbled on it again. I did some research on my own and made some amazing discoveries. In the next few minutes you are about to see how a pioneering Swiss mathematician and physicist Leonhard Euler(1770) carefully drew out the situation of the planets and comet Elenin on September 26th 2011 on the back of a 10 Swiss Franc note, Switzerland’s national currency! Ok, he probably did not drew the image himself, but he did discover an asteroid later named ‘Euler’ which is supposed to be drawn on the Swiss bank note, yet the path of the Euler asteroid doesn’t seem to correspond with what is drawn on the 10 Swiss Franc note.

This particular Swiss note is from the ’6th Series’ of Swiss bank notes, issued in November 1979 and withdrawn in May 2000. 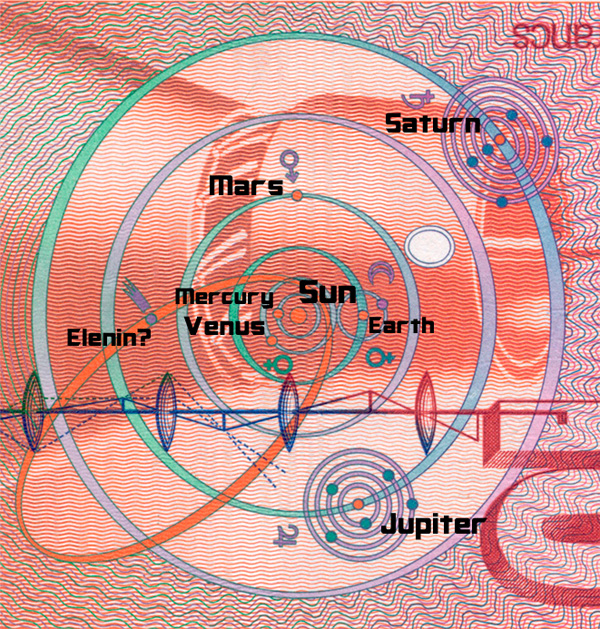 Look at the circles. The blue-green circles represent the orbits of the planets in our solar system. The red dot in each circle represents the location of a planet. The big red dot in the center represents our Sun. The first circle represents Mercury’s orbit and the red dot on this circle represents Mercury. The second is Venus. The third is Earth. Notice the blue dot circling the Earth, this is the Moon(which is emphasised by the symbol of a moon drawn near it). The next circle is representing Mars and its orbit. The next circle represents a planet with five moons, which is Jupiter(Jupiter has 64 moons). The final circle is Saturn with its moons(Saturn has 62 Moons). The red elliptical orbit represents the path of a long period object like a comet, which I think is Elenin. Note the blue object within this elliptical orbit and its tail.

The symbols near the planets are the exact symbols given to these planets by astronomists(not astrologists, these are different symbols).

Ok so what does this all mean? Does it mean Leonhard Euler really predicted a comet would be coming in at a certain point in time? Well let’s find out!

This particular arrangement of planets points to a specific point in time. There is only one short period in time that our planets in our solar system line up precisly as in this configuration. This mathmetical drawing emphasises a specific date. To find out what date this drawing represents, we have to use NASA’s Jet Propulsion Laboratory Tool to see if anything matches our configuration of planets as shown on the Swiss Franc bill. Let’s try Elenin’s Orbital Diagram. This diagram depicts the location of all our planets and comet ELENIN. BINGO! If you set the date to 09/26/11 (Elenin aligns perfectly with Sun-Earth-Mercury on this date), the following picture results. 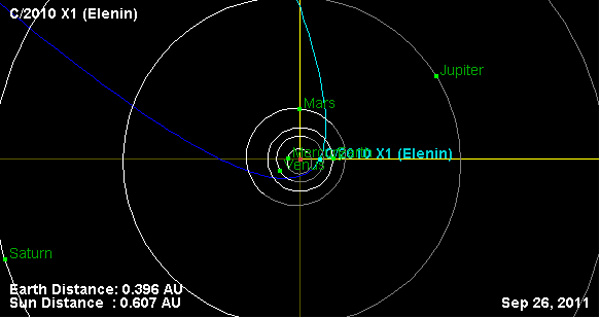 Almost an exact copy of our 10 Swiss Franc bill. Except the elliptical orbit of Elenin is precisly mirrored in the JPL image and it seems that Jupiter is on the spot where Saturn was supposed to be. But we can’t blame Leonhard Euler for he was working on this 330 years ago.

Here I inverted the color of NASA’s JPL image of Elenin, so that its more easy to compare.

Furthermore, in the background of the picture you see a water turbine. This was a project Leonhard Euler used to be working on.

Did you already notice the guy’s name is LEOnhard Euler, while the man who discover Elenin is named LEOnid Elenin? Leonhard Euler spent most of his life living in Russia, while astromoner Leonid Elenin IS Russian. All of this together is some very convincing evidence that something is going on here. Such coincidence cannot exist in my opinion.

Due to Switzerland’s neutral position on Earth, the Swiss Franc is one of the most stable currencies of all times, maybe Leonhard Euler knew that this would be the case, thus ended up drawing his predictions on the 10 Swiss Franc bill.

Other Swiss Franc bills show some weird stuff as well(i.e. very tall beings and a saucer-like object), you can Google them if u like!