Look Upon My Works and Despair: The Hubris of Dries Verhoeven

Our indispensable friends at Defend Europa have quite rightly drawn attention to a public art display in the city of Utrecht, in the Netherlands. Entitled “Sic transit gloria mundi” (Thus passes the glory of the world) it depicts the toppled monument of white Western man.

Spotted in Utrecht, the Netherlands, advertising a statue of a fallen White man along with the words “Sic transit gloria mundi” (Thus passes the glory of the world).

The project is celebrating the Western man falling from his pedestal and the eradication of Western culture. pic.twitter.com/d6iBjtKjrI

At a time when controversy surrounds colonial memorials, the West’s most recent dominance is beginning to show signs of collapse. Russia, and Asian economic giants are breathing down our neck. In Africa, China is fast becoming the new imperialist power and Islamic nations, thanks to migrants living here, exert a growing influence on Western culture. This calls for a new vision of our role in the world.

In collaboration with the Western Hegemony National Monument Committee and the city of Utrecht, a cenotaph is to be erected on the Neude in 2018. Spring marks the beginning of its construction.

It is essentially a monument celebrating the end of Western hegemony. Defend Europa was quite right in its characterization of the installation: “The project is celebrating the Western man falling from his pedestal and the eradication of Western culture.”

Verhoeven’s website showcases some of his writing as well. In an essay entitled “Only Doubt Can Save Us” he describes his mission as an artist:

The question that has been puzzling me for twenty years is how to disarm the viewer, how to turn the viewer into a mollusc, soft and receptive to doubt. In times of increasing polarization, that need only becomes stronger. I am convinced that when we are regularly thrown off balance, we can confront the social debate in a more sensitive and less didactic and binary manner. It's not up to the artist to bombard the spectator with yet another truth. But instead I hope to work on a periphery of a debate, to question and shake up belief systems. I believe in the subtle breaking down of boundaries: the boundaries of the axioms in the mind of the observer and the boundaries of assumed decency.

It’s notable that his stated aim is not to bolster, inspire or venerate, but to “turn the viewer into a mollusc.” His artistry is subversive, irreverent, and nihilistic. There is an element of gloating as well.

I met a traveller from an antique land
Who said: Two vast and trunkless legs of stone
Stand in the desert... near them, on the sand,
Half sunk, a shattered visage lies, whose frown,
And wrinkled lip, and sneer of cold command,
Tell that its sculptor well those passions read
Which yet survive, stamped on these lifeless things,
The hand that mocked them and the heart that fed;

And on the pedestal these words appear:
'My name is Ozymandias, king of kings;
Look on my works, ye Mighty, and despair!'
Nothing beside remains. Round the decay
Of that colossal wreck, boundless and bare
The lone and level sands stretch far away.

Shelley began writing it in 1817, shortly after the British Museum announced that it had acquired a fragment of a statue of Egyptian pharaoh Ramesses II. Thematically the poem explores the ravages of time, the impermanence of empires, decay, and the trap of hubris. While Shelley’s work comes across as a dire warning, Verhoven’s public art display is a work of hubris in its own right, which seems to gleefully anticipate the decline of the European peoples. 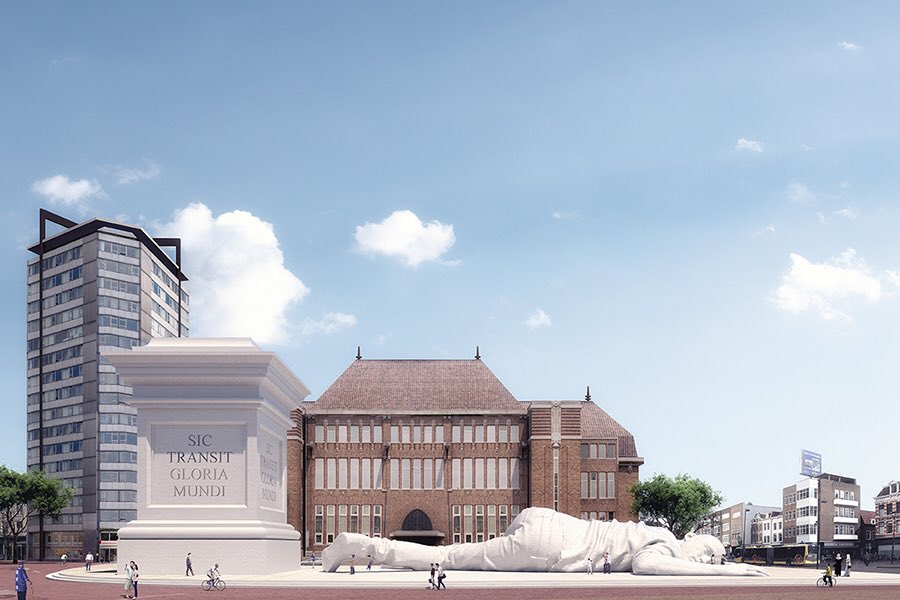