Maasais, Canaanites And the Inca Connection 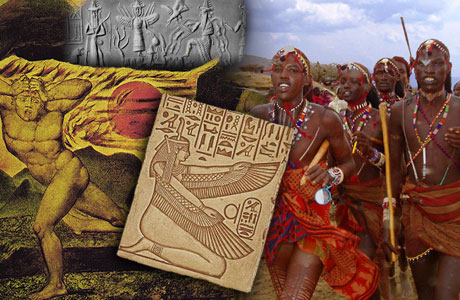 Why is Enkai, the Creator god of the Maasai, almost the same as Enki, who created the Sumerians, as well as Enoch, the Canaanite hero who stormed heaven, and Inca, the divine chief of the ancient Andeans?

Is it accidental that if you reverse the syllables of those names - a word-game which ancient societies played all the time - you get Ka'in of the Sumerians, Kainan of the Canaanites, Cain of Genesis and Chanes of Mesoamerica?

Thus, although Genesis informs us that Cain was Enoch's father, a scruple crosses the mind. For the book cannot make up its mind which one of them was the first city-builder. It says that Cain gave his city the name Enoch. But both words mean exactly the same thing - "founder," "settler," "city builder." It is thus certain that Cain is Enoch.

What the Maasai share with the Canaanites, Sumerians and the autochthons of Central America is their Nilotic root.

And, as is now well known, Genesis is drawn entirely from Israel-Judah's bondage in Egypt and Sumeria (Babylon) and, between them, the religious subservience in Canaan called "idolatry."

All the ancient Nilotes worshipped the creator goddess Maat (known also as Isis and a thousand other names). As the goddess of love and justice, her counterpart in Orphic mysticism was the mysterious Eros, known to the Vedic Indians as Kama and to the Romans as Cupid.

By the time we meet this deity in literature, however, she is entirely male because, by that time, the whole matriarchal world of the Hamites has been overrun by Semito-Aryan patriarchy and all institutions of the goddess have been handed over to a new male supremo - for instance, Zeus on Olympus.

Ptah-hotep, the Coptic guru, defined Maat as the truth, justice and righteousness. For she it was who could transform a human individual into a geru-maa, self-disciplined and virtuous. A geru-maa was likened to a tree growing in fertile ground, offering pleasant shade and yieding succulent fruit.

This is extraordinary information. In ancient Hamitic languages - as we saw in an earlier piece - you removed "at" from a noun to masculinise it. If you masculinised Maat, you got Maa.

Maat had been the supreme goddess ever since she created herself and the universe. Now, under patriarchy, the need arose for the supreme divine office to go to a male god. It was thus that Maat became Maa.

The Maasai are likely to have come from around Napata and Meroe, the seat of a celebrated Nilotic state where, at Nag Hammadi, ancient gospels have recently been discovered which connects the authors with the Melchizedekian order to which Jesus belonged.

All this may indicate why the worshippers of Enkai called themselves Maasai. Cynthia Salvadori translates the word Maasai as "people of Maa speech." But that begs the question: What exactly is "Maa speech?" An answer that suggests itself is that Maa is another name for Enkai.

Moreover, if Enkai is cognate with the Sumerian Enki, the Canaanite Enoch, Genesis's Cain, the Andean Inca, the Mexican Chanes, to this list we can add the ancient Western African kingdom of Ghana and, in modern Ghana, the Akan.

Robert Graves in The Greek Myths and Robert Temple in The Sirius Mystery report that Canaan is only a Hebrew corruption of Aganor - the Ugandan who became the eponymous father of the Canaanites - a name which closely resembles Ghana.

Did the Maasai carry over the Maa legend with them to Kenya - just as the Sumerians and Syria's Mandaeans took it from Maagan or Maadai (their respective words for Egypt) and just as the Phoenicians took Cain's legend to Central America?

Do maagan, maadai and Maasai mean the same thing, the land of origin along the sacred Nile? What we can stress is the moral nature of Maat and Maa, whose essence was Charity.

We find that kharis (plural: kharites), the Greek word which has given us both charity and charisma and even cher or cheri (the French words for "dear" and "darling") all have the significance of grace, favour and generosity. Today, charisma means oral ability to sway people.

But, originally, charisma was the Charis of Maat, the ability to sway people, not merely by mouth, but, much more genuinely, through good deeds. Our politicians, who are "charismatic" only by mouth, lack the charisma of the Mother Goddess.

For we learn that the "ma" in charisma is the same "ma" in Maat, which is clearly related to the element ma in mama, which means "mother" in practically all languages in the world.

The "Ma" in Maat is the bountiful one, the liberal giver, the Charis-maat, the Charitable mama, the one who ceaselessly strives against falsehood, corruption and chaos. Omowale reports that Maat "...created the kind of enabling climate that the Dinka of Sudan mean when they say the land is in cieng' ... [and] ... Abunta..."

Abunta is related to the Kenya Luo bunda. But don't ask me why they are almost identical to the English noun bundle and adjective abundant (from the Latin verb abundare, to abound), which mean exactly the same thing and imply cornucopia.

But I know that cieng is the way many Luo-speaking Sudanese tribes spell what the Kenya Luo call chieng' (the "sun.") My name Ochieng' (feminine: Achieng') means "born under the sun," that is, in the region of noon, and implies good weather and Maat's providential abundance.

To reiterate, Enoch is just Cain in reverse - a man of solidly civilised foundations, a man identified with all the knowledge (art, skill and wisdom) that goes with techno-scientific advancement. Enoch, then, is a Hebrew corruption either of Anki, the universe, or of Enki, Lord of the Earth - the latter more probably because the Earth was the base or foundation or settlement or city of the god Enki. As anybody can see, Enki is exactly the same name as Enoch and, in reverse, Cain.

Enki, Enoch and Cain also mean "foundation." Nobody that I know seems to notice how etymologically close the two names (En-och and En-ki) are.

If, as Graves affirms, the Canaanites came from East Africa via the Nile, it is not surprising to find even a third cognate by Lake Victoria, the Maasai god En-kai.

En-kai, En-ki, An-ki, En-och, Inca and their reverse forms Ka'in, Cain, Chanes, Ghana and Akan mean exactly the same thing because they refer to one and the same Nilotic African pioneer in the remote past called Canaan.

Non-Nilotic Kenyans will also be interested in this story because it is almost certain that Enkai was the archetype of the god Ngai worshipped by many Bantu neighbours of the Maasai before he was banished from the land by the Euro-Hebraic Jehovah.