Dec 25, 2010 Source: dailymail.co.uk
First there were meals we had to make all by ourselves.
Then ’ready made’ meals came along, making life that much easier.
But what if you could just print your dinner using food ’ink’? 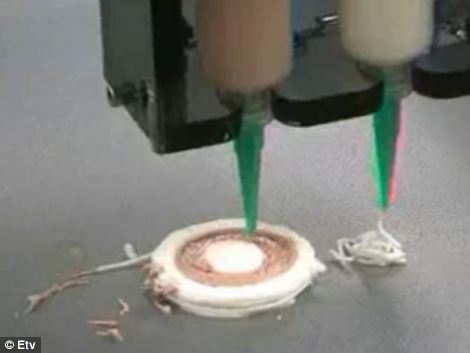 Easy squeezy: Scientists are developing a 3D food printer that creates real meals from syringed raw ingredients
Part of their Fab@home project, an open-source collaboration, you just put the raw food ’inks’ into the machine, load the recipe (or ’FabApp’) - and press the button.
The design takes the form of a set of syringes that deposit food inks line by line, and layer by layer, according to an electronic blueprint.
The blueprint states exactly what materials go where and are drawn up using traditional engineering computer-aided design (CAD) software.

And the implications of the technology could be far-reaching.
People wishing to emulate the likes of Gordon Ramsay could just download his recipe files - and doctors could prepare special dishes to suit their patients’ dietary needs.
Project leader Dr Jeffrey Ian Lipton said: ’FabApps would allow you to tweak your food’s taste, texture and other properties.’ 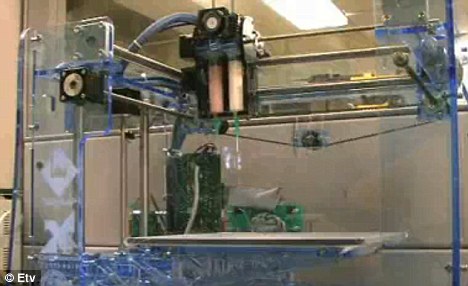 Ready made: The design takes the form of a set of syringes that deposit food inks line by line, and layer by layer, according to an electronic blueprint.
’Maybe you really love biscuits, but want them extra flaky. You would change the slider and the recipe and the instructions would adjust accordingly.’

The ’inks are currently limited to ’anything that can be extruded from a syringe’ - such as liquid cheese, chocolate and cake batter.
But the team is working on ways to turn other ingredients into syringe-friendly materials.

So far, they have had some success creating cookies, cake and ’designer domes’ made of turkey meat.
For master chefs, the breakthrough could mean a whole new world of customisable menus and food. 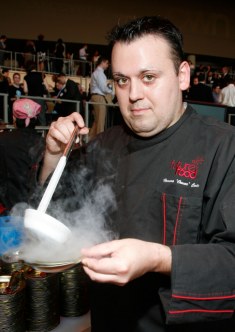 Homaro Cantu, chef at Chicago’s Moto, has ’printed sushi using an ink jet printer’.
’Imagine being able to essentially "grow", "cook" or prepare foods without the negative industrial impact - everything from fertilisers to saute pans and even packaging,’ he said.

’The production chain requirements for food would nearly be eliminated.’
Mr Cantu believes this will have the added benefit of improving food production methods.

’You can imagine a 3D printer making homemade apple pie without the need for farming the apples, fertilising, transporting, refrigerating, packaging, fabricating, cooking, serving and the need for all of the materials in these processes like cars, trucks, pans, coolers, etc,’ he said.

Long term, the team believes that people will take to the technology by creating their own 3D printable food recipe social networks with everyone improving on each other’s creations.

’3D printing will do for food what e-mail and instant messaging did for communication,’ said Mr Cantu.