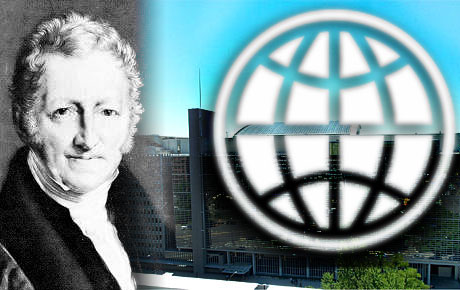 It should be conceded that the history of population control in the annals of history is very old, and very pagan. Henry Kissinger´s National Security Study Memorandum 200 on Implications of Worldwide population growth on the US interests is a plagiarised version of Thomas Malthus´own plagiarism of Giammaria Ortes. Additionally, there is the conduct of Herod, as summarized in the Gospel According to St. Matthew, Chapter 2. During the recent 2,000 years of European history, the first "Malthusian" law similar to what is proposed for the U.N. 1994 Cairo Population Conference, was the "socialist" decrees of the Roman Emperor Diocletian. Since the beginning of modern European history cerca 1439, the center of population-control policies has consistently been Venice.

A key character in the whole population equation is a Venetian monk Giammaria Ortes (1713-1790), unknown to most, but quite an evil character. I found reference to him in the Camaldolensian monastery of Murano, to the nort-east of Venice, where he enetered as a novice in 1727. There is a further reference to him as a “brilliant economist” in Karl Marx´s Capital, Vol. I, chap. XXV, sec. 4; However, he will be remembered, amongst other things, as the intellectual author of the 1790 Riflessioni upon which the genocidal 1994 U.N. Cairo Population Conference draft is based.

Malthusianism was imported into Britain from 16th century Venice, in the form of the 1606 English translation of Venetian Giovanni Botero's "Delle cause della grandezza e magnificenze della città." (1588).

Incidentally, Malthusianism is a theory in demography regarding population growth developed during the industrial revolution on the basis of the writings of Thomas Malthus. According to this theory, population expands faster than food supplies.

Botero (1544-1617) was a Venetian agent closely tied to Paolo Sarpi, today´s David Rockefeller and the man most likely behind the assassination of a brilliant English playwrite, Christopher Marlowe. At the National Library of Florence, I found a 1590 letter written by Sarpi instructing his henchmen to get rid of Marlowe. Marlowe was murdered in 1593. The significance of Botero in introducing Malthusianism into 17th Century England is emphasized in Joseph A. Schumpete´s A History of Economic Analysis.

Schumpete wrote that Botero's population policy was adopted by William Petty, in his 1682 Essay Concerning the Multiplication of Mankind. He is the Venice-linked grandfather of Jeremy Bentham's [first head of the British foreign intelligence service] and Thomas Malthus' Shelburne.

Why was Ortes´role so significant for the annals of history? Because his role in modern Malthusianism [ie. Human genocide] came about as a continuation of the war against Leibniz and Classical culture he represented by Venetian Abbot Paolo Conti. Think of Conti as James Bond´s nemesis “Goldfinger.”

One final note which should please those more intrested in rustling skirts through the hallways of history than scientific proof of deeds. Has anyone wondered why such a dispraportionate number of homosexual monks and nuns throughout history have come from Venice? Because Venetian nobility practiced what they preached. In the last 200 years of Venice's political independence, the oligarchy imposed increasingly strict celibacy upon a growing majority of its people. By the late 17th Century, a typical Venetian oligarch travelling abroad, practiced more or less perpetual abeyance —like Ortes. This lifestyle caused a proliferation of homosexuality among both male and female members of the Venetian oligarchy, a city which rivalled Biblical Sodom and Gomorrah on such accounts.

If we are to take this logic one step further and super impose it on the XXI century world of depleted natural resources, the following assertions can be concluded. If the majority of people [who die] were African and thus unskilled and resources were not taken from savings to fund provision of care, then in pure economic terms the survivors could be better off and per capita income could rise! I asked one former U.S.-AID representative who spent over two decades in Sub-Saharan Africa if I was on the right track in understanding the more covert aspects of the Family Planning, specifically if harsh economic reality is forcing the hand of Western nations to forcibly reduce African population. His response was short and chilling. “You are dead on target.”

Is this then not tantamount to 'indirect population reduction' or, more precisely, genocide? Thought, I´d ask.