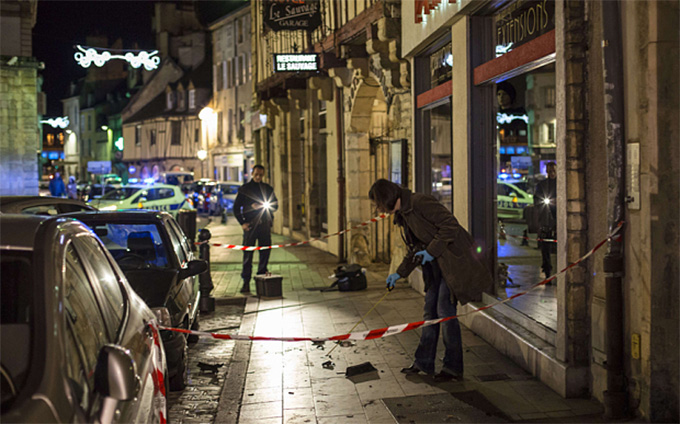 Eleven people injured after driver targets crowds in Dijon a day after recent convert to Islam is shot dead during knife attack.

A driver shouted "Allahu Akbar" ("God is greatest") as he ploughed into groups of people in the eastern French city of Dijon on Sunday injuring 11 people, two seriously, a source close to the investigation said.

"The man, born in 1974, is apparently imbalanced and had been in a psychiatric hospital," the source told AFP, adding that "for now his motives are still unclear".

The attack came the day after a French convert to Islam was shot dead after attacking three police officers with a knife while also reportedly crying "Allahu Akbar" in the central town of Joue-les-Tours.

The driver in Dijon was arrested by police after targeting passers-by at five different places in the city on Sunday evening, a police source said.

"Nine people were lightly injured and two others seriously but their lives do not appear to be in danger," the source added.

Witnesses told police that the driver shouted "Allahu Akbar" and "that he was acting for the children of Palestine," a source close to the investigation said.
Bernard Cazeneuve, interior minister, told French television station TF1 on Sunday that the man who was shot dead the day before after attacking a police station in Joue-Les-Tours was "very unstable".

Comment: Then why didn't he attack Israel then or at least a French Jewish community? Why drive into a crowed of innocent French people? Most of these people likely don't agree with the Zionist agenda to drive out the Palestinians from Palestine anyway. These are IMPORTED conflicts - generated by "ladies" like Barbara Spectre.

The anti-terror branch of the Paris prosecutor's office has opened a probe into that attack, investigating whether it was motivated by radical Islam.

This comes right after an Islamic convert attacks French people