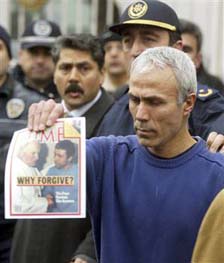 The Turkish man who shot Pope John Paul II nearly 29 years ago emerged from prison and declared himself a messenger from God, then spent his first night of freedom in a luxury hotel room.

Mehmet Ali Agca, 52, said Monday he would talk to the media in the next few days.

But it seemed doubtful that his comments would clear up uncertainty over whether he acted alone or had the backing of communist agents, as he once claimed. He has issued contradictory statements over the years and there are questions about his mental health.

Agca shot John Paul on May 13, 1981, as the pope rode in an open car in St. Peter's Square. The pontiff was hit in the abdomen, left hand and right arm. 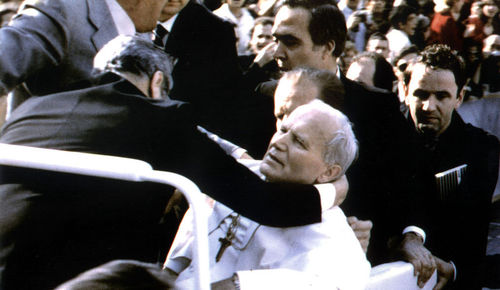 NEAR-FATAL MOMENT: Pope John Paul lies wounded in St. Peter's Square after an assassination attempt in this May 131981 file photo.
John Paul met with Agca in Italy's Rebibbia prison in 1983 and forgave him.

Following his release, Agca, his hair now grey, waved to journalists and sat calmly between two plainclothes policemen in the back of a sedan that took him to a military hospital. There, doctors concluded he was unfit for compulsory military service because of "severe anti-social personality disorder," said his lawyer, Yilmaz Abosoglu.

Upon his arrival later at the five-star Sheraton hotel, he addressed reporters in English. He had traded the blue sweat shirt he wore when he left jail for a dark blue suit and tie.

"I will meet you in the next three days," Agca said. "In the name of God Almighty, I proclaim the end of the world in this century. All the world will be destroyed, every human being will die. I am not God, I am not son of God, I am Christ eternal."

Agca, who has previously claimed to be the Messiah, said the Gospel was full of mistakes and he would write the perfect one. He delivered a similar message in a long, rambling statement distributed by Abosoglu outside the prison in Sincan on the outskirts of Ankara, the Turkish capital.

An army of journalists created chaos in the hotel lobby, scattering chairs as hotel staff looked on helplessly. Agca then took the elevator to his room, where he rested in the company of his brother Adnan Agca and some friends, Gultekin said.

His brother said they were likely to travel to Istanbul later in the week.

Agca, who has said he wants to travel to the Vatican, does not have a passport. One of his lawyers once said that Agca had converted to Christianity while in jail. The motive for the attack on the pope remains unclear but it has not been linked to Islamic issues.

Vatican spokesman Rev. Federico Lombardi said there were no plans to comment on the release. Robert Necek, spokesman for Cardinal Stanislaw Dziwisz of Krakow, Poland, who served as secretary to John Paul II, also would not comment.

When Agca was arrested, minutes after the attack, he said he had acted alone. Later, he suggested Bulgaria and the Soviet Union's KGB were behind the attack, but then backed away from that assertion. His contradictory statements have frustrated prosecutors over the decades.

Prosecutors in Poland who are investigating Agca's attack on Pope John Paul II said his release had no influence on the investigation.

"Testimony from a person who first sells the information to the media ... is of no value to us," prosecutor Ewa Koj of the National Remembrance Institute said. Koj also noted that Agca had changed his testimony many times.

Prosecutors at the institute are studying over 4,000 pages of documents, including Agca's testimony, they have received from Italy.

Agca had said that he would answer questions about the attack after he was released from prison. He has also said he is beginning to consider book, film and television documentary offers.

He was released after completing his sentence for killing journalist Abdi Ipekci in 1979. He had received a life sentence, which amounts to 36 years under Turkish law, for murdering Ipekci, but he escaped from a Turkish prison less than six months into the sentence and shot the pope in Rome two years later.

Agca reportedly sympathized with the Gray Wolves, a far right-wing militant group that fought street battles against leftists in the 1970s. He initially confessed to killing Ipekci, one of the country's most prominent left-wing newspaper columnists, but later retracted that.

After his extradition on June 14, 2000, Agca was separately sentenced to seven years and four months for two robberies in Turkey in 1979. But authorities deducted the prison sentence he had served in Italy, and several amnesties and amendments of the penal code further reduced his term. The situation complicated the calculation of his remaining term and led to his wrongful release from prison in 2006. He was re-imprisoned eight days later.

THE Turkish gunman who tried to kill Pope John Paul II nearly 30 years ago was released from prison yesterday as hopes rose that he would finally shed light on whether the assassination attempt was a KGB plot.

Mehmet Ali Agca, 52, said last week he would "answer all questions" about the murder attempt after his release. When he was arrested minutes after the attack in St Peter's Square on May 13, 1981, he claimed he had acted alone.

In confused, often rambling testimony, he later said Bulgarian agents acting for Moscow were behind the attack, but then withdrew this. 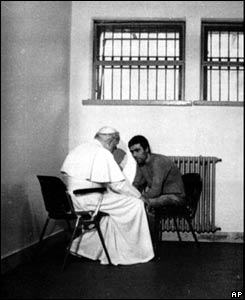 John Paul II met and forgave Agca, a former member of the Turkish far-right Grey Wolves, in his cell in 1983 while the gunman was serving a 19-year sentence in an Italian prison. Agca was pardoned in 2000 and returned to Turkey, where he was re-arrested and given a 10-year prison sentence for murdering a Turkish newspaper editor in 1979.

Italian magistrates who investigated the attack on the Pope remain convinced there was a Soviet plot, arising from Moscow's fears that an anti-communist revolt in his native Poland would bring down the entire Soviet system.

In 1986, an Italian jury acquitted six defendants, three Bulgarians and three Turks, accused of involvement in the plot for lack of evidence. Yesterday, Cardinal Achille Silvestrini, who was the Vatican's foreign minister at the time, said John Paul had "become convinced the origins of the plot lay in the Soviet bloc".

The Vatican "had the impression that Agca was a pawn . . . and did not know much", Cardinal Silvestrini told La Stampa. "Even now I doubt if he will say anything concrete." Haci Ali Ozhan, Agca's Turkish lawyer, said his client hoped to travel to Rome to pay his respects at the tomb of John Paul II and meet Pope Benedict XVI but arrangements had not been finalised with the Vatican. Meanwhile, he would take a fortnight's holiday.

Mr Ozhan said Agca had received more than 50 book, film and television documentary offers from around the world and would decide which to take up "one or two months after his release".

In a statement last week, Agca, who in the past has claimed to be a messiah, called for a "new American empire" championing peace and democracy, adding: "Terrorism is the evil of the devil.

"All religions prohibit and condemn terrorism. Al-Qa'ida is a psychopathic, criminal, Nazi organisation."


"World News Tonight broadcast from May 13th 1981, when Pope John Paul was shot in Vatican Square. "

Philip Gardiner - Secrets of the Serpent, Symbolism and Legend