The clip above from MSNBC, July 15. It's an interview with another "expert", Matthew Simmons who is claiming that BP is covering up an "Open Hole several miles away, still spewing 120 000 Barrels of oil". We have no way of knowing if this is true. Obviously BP would not be interested in telling anyone about other leaks or damages to the sea bed, but the question is what is Matt Simmons proof and why is he saying this?

Why is MSNBC letting this guy on the air? Because he is CFR!

Sonar Images as proof for his claims?

I listened again to the most recent interview of Simmons by Dylan Ratigan linked at the beginning of this thread. At time mark :48 Ratigan says, " I don't know if they're acknowledging the open hole that you are referencing." Then Simmons mentions the LA Times article and the sonar images. If the link you provided is the same article that Simmons is referencing it does not mention sonar images but gamma-ray images of the second pipe lodged in the BOP. Sonar images would not be able to do that. Simmons then goes to say that the navy needs to send a submarine to find the hole, but the LA Times article that he referenced is saying nothing about another hole or sonar imaging.

Who is Matt Simmons?

Matthew Simmons, founder and chairman emeritus of Simmons & Company International, is a prominent oil-industry insider and one of the world's leading experts on the topic of peak oil. Simmons was motivated by the 1973 energy crisis to create an investment banking firm catering to oil companies. In his previous capacity, he served as energy adviser to U.S. President George W. Bush.

Matthew Simmons believes the Club of Rome predictions are more accurate than usually acknowledged. Simmons is an adviser to the Oil Depletion Analysis Centre. He is a member of the National Petroleum Council and the Council on Foreign Relations. He believes a careful assessment of Saudi Arabian oil reserves is the most significant issue shaping petroleum politics.

Simmons is the author of the book Twilight in the Desert: The Coming Saudi Oil Shock and the World Economy. His examination of oil reserve decline rates helped raise awareness of the unreliability of Middle East oil reserves as the published reports have never been verified. 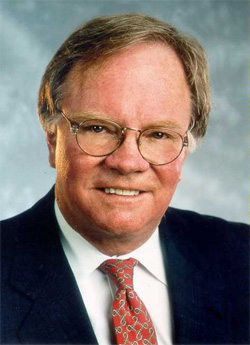 Ok, so he (Matt) has an invested interest in oil crisis and peak oil? He diggs the "Club of Rome" and he is a member of the CFR (Council on Foreign Relations). Well, that is good to know. This is conpiracy theories created by people from within the CFR. Pretty interesting.

We don't know anything about what is really going on in the Gulf. A lot of people are trying to advance in there own agenda because of this situation, might be good to keep that it mind while the rest of this thing unfolds.