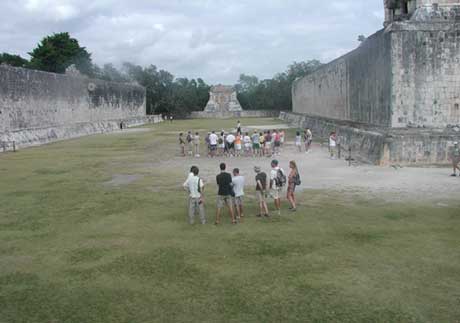 Ancient Arena: This ancient ball court was the site of dramatic ball games favored by the Mayans. Adding to the experience of the sporting events were the court's unusual acousitc properties, which allowed faint sounds to be carried for hundreds of feet, according to a new study.

Some ancient civilizations may have had an ear — not just an eye — for architecture. Two recent studies suggest early builders intentionally added unusual, and often psychedelic, sound effects to their structures.

Lubman studied the court's acoustic elements, including two "whispering galleries" that allow visitors to hear whispers from 460 feet away.

The feature could have once allowed a king or priest to address crowds of up to 3,000 outside without a microphone, Lubman explained.

The sound effects may have also held spiritual significance to players taking part in a bizarre game on the court.

In the Maya competition, players were fully padded and threw around a hard, rubber ball. They deflected the ball with their hips and a device at their chest known as a ball deflector.

The unusual acoustics on the court likely added an eerie ambiance to the play. The effect was perhaps appropriate, considering the competition's losers were sometimes sacrificed after a defeat, according to Lubman.

"Players on the ball court would hear voices but see no one," he explained. "This would seem supernatural to pre-scientific listeners... . According to the K'iche' Maya myth called the 'Popol Vuh,' the noises of the ball court play evoked the Lords of the Underworld."

A single ball striking the court would have echoed four times per second, Lubman found.

"I suspect that the flutter echoes sounded like the rattles of a menacing rattlesnake," he said. "(They) must have added an exciting aural element to the deadly drama of the ballgame."

The echoes were made possible by massive, smooth stone walls carefully positioned to reflect sound, similar to today's band shells. The walls at the court are 270 feet long and 28 feet tall.

The whispering galleries work by pushing sound waves along the playing field. The effect is similar to that produced by speaking through a long tube, which conserves sound energy and reduces losses.

Historical Maya writings paint a fuller picture of the games once played on the court, telling of hallucinogenic drugs that may have further heightened the auditory illusions. Fragrant incense has also been unearthed at the site.

Chris Scarre, a professor of archaeology at Durham University in England, recently conducted a survey of acoustical features in ancient structures. He told Discovery News that Lubman's research is "convincing and exciting."

In addition to Mesoamerican structures, Scarre said sound effects can be heard in Paleolithic caves and various European structures, including St. Paul's Cathedral in London, which has a whispering gallery.

"We do not know in detail how (the more ancient) sites were used, and the challenge is to discover a methodology that enables us to construct a convincing argument," Scarre said, adding that he hopes the research "brings sound, music and hearing back into archaeological discussion."