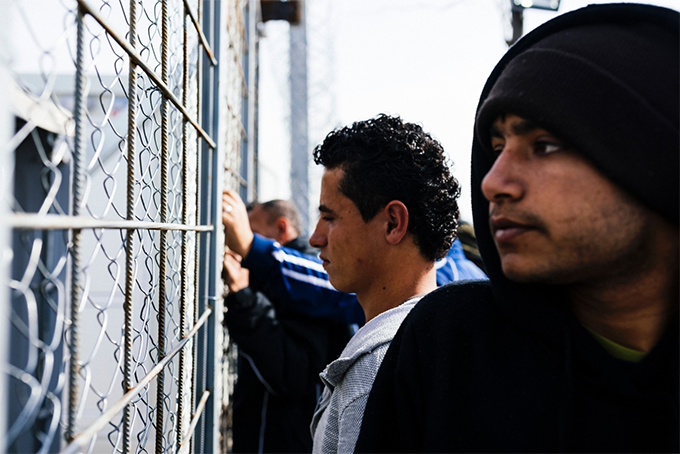 The European Union and Turkey struck a preliminary deal Tuesday to block the vast waves of migrants crossing the Aegean Sea, effectively agreeing to slam shut the back door into Europe still being traversed by tens of thousands of asylum seekers fleeing war in the Middle East.

The deal, to be ironed out over the next 10 days, could dramatically alter the region’s refugee crisis, sealing off the single biggest corridor for irregular migration into Europe. From across the developing world but especially the Middle East, more than a million desperate people over the past 12 months have rushed to the jagged Turkish coast, where a new life in Europe is only a short if risky journey west by smuggler’s raft.

But even before the deal was finalized, the practical impact was being felt on the ground Tuesday evening, as Serbia announced it would allow entry only to people who have valid papers to travel in Europe. In a statement on the Serbian Interior Ministry’s website, the government said it was reacting to a similar move by Slovenia and needed to protect itself from becoming a “collection center” for migrants.

To keep the migrants from their doorstep, the Europeans are now willing to pay — a lot. Already promised some $3.3 billion to do more to contain the crisis, Turkey — a nation whose authoritarian leader is cracking down on freedoms at home — would now be paid double that.

European leaders lauded the agreement as a means of turning back economic migrants while also “saving” Syrians from the clutches of unscrupulous human traffickers. But the United Nations and rights activists were already decrying it as a potentially serious — even illegal — blow to refugee rights. It could, critics warned, block the path to sanctuary in the West for untold thousands of legitimate asylum seekers.

“We know, we’ve documented, that Turkey is not a safe place for asylum seekers and refugees,” said Gauri van Gulik, Amnesty International’s deputy Europe director. “We’ve documented people being sent all the way to the south of Turkey, held in incommunicado detention, and sent back to Syria.”

Under the deal, all new migrants — including Syrians and Iraqis — found at sea or who reach Greece by boat would be sent back to Turkey. But for each Syrian among those returned, the European Union would be required to accept another Syrian directly from Turkish refugee camps in a “one-for-one” exchange.

Only Syrians, and not even Iraqis fleeing the Islamic State, appear to qualify for that direct relocation program. Even Syrians who risk the sea and are turned back could be blacklisted from legal resettlement in Europe, providing an extra incentive for migrants to avoid even trying to cross the Aegean.

On the Greek island of Lesbos, the single most popular arrival spot for asylum seekers trying to reach Europe, boats continued to come ashore Tuesday despite the warnings from E.U. leaders that people should stay in Turkey. In the island’s sprawling and fast-filling camps, new arrivals said they had heard that the door to Europe was closing and that people would be turned away. But they said they had come anyway because they felt they had no other choice.

“We need a future. We need safety,” said Abid el-Mohsin, a 23-year-old from Syria. The Islamic State murdered his brother, he said, and he was not going to stay to meet the same fate. So he fled.

In exchange for taking back migrants, Turkey — already hosting some 2.7 million Syrian refugees on its soil — is driving a hard bargain, and it surprised its European counterparts at the start of the talks on Monday with further demands. In addition to new aid, Ankara also wants accelerated talks on joining the European Union — a bid opposed by many current members — as well as visa-free travel within the E.U. for Turkish citizens. European nations, facing a strong domestic backlash against migrants, may have little choice but to agree.

The deal is a “breakthrough, if it is realized, if it is implemented,” said German Chancellor Angela Merkel.

Critics immediately accused the Europeans of political expediency by agreeing to a deal that could only strengthen the authoritarian rule of Turkish President Recep Tayyip Erdogan. His government recently seized control of the country’s largest newspaper, and its crackdown on dissent in Kurdish pockets of the country has raised alarm over fast-deteriorating human rights.

“I think this is a no-good deal for the E.U., because I don’t think we are working for a stable Turkey in the future,” said Marc Pierini, former E.U. ambassador to Turkey from 2006 to 2011. “We’re only inviting the Turkish leadership to crack down on the media or any opponents.”

The deal, however, amounted to a compromise. European Council President Donald Tusk, backed by a number of hard-line nations, sought to include strong language in the deal declaring the migrant route officially “closed.” But Merkel, risking a backlash at home where anti-migrant sentiment is growing, forced through a change that left out that language and inserted the “one-to-one” exchange deal with Turkey that at least allowed some Syrians a shot at direct relocation into Europe, according to the think tank Open Europe.

Yet even as Tusk staged a road show across Europe to sell the deal, it risked coming apart. In theory, its open-ended language could require Europe to resettle tens of thousands — and even hundreds of thousands — of Syrians directly from Turkey.

Europe so far has failed dismally in its effort to “legally relocate” Syrians, Iraqis and other asylum seekers from Greece and Turkey. Last year, European nations promised 160,000 slots, but only about 700 have been filled. Some countries, such as Hungary, have effectively reneged completely. Its leader, Viktor Orban, has already promised to veto the new deal should it compel all E.U. nations to accept Syrians.

If the legal routes to Europe via Turkey do not materialize — and even if they do — experts warned that asylum seekers would be pushed toward riskier alternatives. They include a dangerous route to Europe via war-torn Libya and another to Italy via a long stretch of sea where thousands of migrants have already died.

“This can only work if refugees have a real chance to get to the E.U. directly,” said Dietrich Thränhardt, a migration expert at Münster University in Germany. “If this isn’t the case, they’ll try to find other ways.”

Faiola reported from Berlin. Griff Witte in Lesbos, Greece, and Stephanie Kirchner in Berlin contributed to this report.