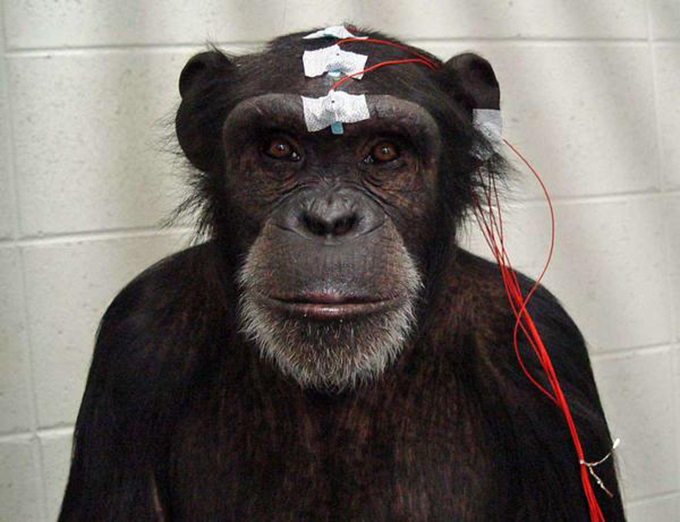 In two separate experiments, scientists have formed a network from the brains of monkeys and rats, allowing them to co-operate and learn as a “superbrain”

Scientists have linked together the brains of three monkeys, allowing the animals to join forces and control an avatar arm, in research that raises the prospect of direct brain-to-brain interfaces in humans.

In a second experiment, the brains of four rats were wired together in a “brain net”, enabling the rodents to synchronise their neuronal activity and collaboratively solve a simple weather forecasting problem that individual rats struggled to complete.

The experiments, which have echoes of the Borg, a sinister alien collective in Star Trek, challenge the notion that our minds will always be ultimately isolated from those of others.

Miguel Nicolelis, the Duke University scientist behind the work, has previously pioneered the development of brain-machine interfaces that could allow amputees and paralysed people to directly control prosthetic limbs and exoskeletons. His latest advance may have clinical benefits in brain rehabilitation, he predicts, but could also pave the way for “organic computers” - collectives of animal brains linked together to solve problems.

“Essentially we created a super-brain,” he said. “A collective brain created from three monkey brains. Nobody has ever done that before.”

He dismissed comparisons with science fiction plots, however, saying: “We’re conditioned by movies and Hollywood to think that everything related to science is dangerous and scary. These scary scenarios never crossed my mind and I’m the one doing the experiments.”

Anders Sandberg, a neuroethics researcher at the University of Oxford, said the work was the most convincing demonstration yet that brains can be linked together in direct communication. “People have claimed digital telepathy in various cool demos, but it’s mostly been total hype,” he said. “I’m quite impressed by this. It has a high ‘gosh’ factor.”

In the first study, scientists fitted three rhesus macaque monkeys with arrays that could record electrical activity from hundreds of neurons in the motor region of the brain.

The monkeys learnt, independently, to control the 3D movements of an avatar arm shown on a digital display in front of them, just by imagining moving it. The monkeys were then given joint control of the arm, with each monkey able to control two out of three dimensions (for instance, along the x- and y-axis) and their activity made a 50% contribution to each.

Although their brains were not directly wired together, the monkeys intuitively started to synchronise their brain activity, allowing them to move the arm collaboratively to a reach for a virtual ball on the screen.

The system appeared to work, even if one of the three monkeys was temporarily distracted. “Even if one monkey dropped out in one trial, the brain net is resilient,” said Nicolelis. “Imagine if you had, not three, but a million. That would be extremely resilient.”

In a second paper, also published in the journal Scientific Reports, the scientists directly linked the brains of rats together via two-way electrical connections that allowed the scientists to both deliver stimulus to neurons and read out electrical activity.

In one experiment, an electrical impulse was delivered to the brain of one rat, and the other rats learnt to synchronise their brain activity, mimicking the first rat’s brain response. In a sense, they were experiencing what the first rat felt, second-hand.

In another demonstration, pulses of stimulation that increased or decreased were delivered to the brains of individual rats, representing temperature and barometric pressure information. The rats were able to combine the information to produce a collective output that predicted an increased or decreased chance of rain. Rats scored better on this task when they were linked as a “brain net”, than when individual rats tried to combine the two pieces of initial information – temperature and pressure – to perform the simple calculation alone.

The scientists said that in the future, the concept might be extended to produce neurally connected “swarms” of rats with collective intelligence.

Nicolelis said that in the long-term the work could have “tremendous benefits” for brain rehabilitation. After suffering a stroke, for instance, language abilities might be able to be restored more quickly if a patient’s brain was retrained by directly synchronising with the language regions of the brain of a healthy person. In humans, the link could potentially be made non-invasively using electrodes on the scalp, however.

But he added it was unlikely that humans would ever be able to directly share complex mental experiences. “You’re not going to share your emotions or personality to a brain-net,” he said. “These are not reducible to a digital algorithm. You can’t reproduce these individual human attributes.”

Ultimately, people may also decide that wiring themselves up with others is not entirely desirable. “There may be special instances where you’d want a long-term connection with someone – like a married couple or a military platoon,” said Sandberg. “But there’s no guarantee that brain-to-brain interfaces will be a sensible thing in practice. There’s something to be said for neural privacy.”