Jul 9, 2013 Source: naturalsociety.com
In a blatant act of transgression against the population of the world and real science, the agricultural equivalent to the ‘Nobel Peace Prize’ known as the World Food Prize has been given to a Monsanto executive and two associates for their role in the development of genetically modified crops. 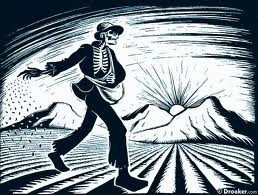 Robert Fraley, the chief technology officer at Monsanto, will be given $250,000 cash along with his prestigious award that was presented at the US State Department on Wednesday. It’s ironic, really, because the US State Department just so happens to also be using our tax dollars to market Monsanto internationally with promotional marketing DVDs and pamphlets. To put it simply, they quite literally act as a marketing wing for Monsanto — the corporation that might as well be a government entity.

It is rather fitting, then, that Monsanto’s executive be adorned with the World Food Prize along with a sack of cash at the headquarters of the Monsanto marketing wing that is the US State Department.

But of course there are also two other scientists being honored for their works against human and environmental health, so it’s important to also identify these corporate scientists as well. First up you have Mary-Dell Chilton, who founder of the rising star biotech company Syngenta, the same great company charged for covering up the fact they knew their own GM corn had been killing animals after consumption. An admission that would ultimately doom their bottom line profits and unveil the reality that Syngenta’s GM crops are indeed unfit for consumption.

As for the third scientist, Marc Van Montagu, he is a European cheerleader for GM crops who founded the Institute of Plant Technology Outreach at Ghent University in Belgium in order to help Monsanto get a stronger foothold in European nations that reject GM crops.

So why have these individuals been given a World Food Prize, especially when over 900 scientists working under the United Nations were forced to admit after extensive research that GMOs lead to decreased yields and are easily outperformed by traditional farming with ease? Probably the same reason that the US government continues to support Monsanto despite complete public disapproval and outcry.

Last month, Monsanto executive Robert Fraley received the World Food Prize. This highly esteemed prize, considered among many to be the “Nobel Prize” of food, was given to the chief technology officer of the chemical company who is ironically working to diabolically destroy agriculture as we know it. As Anthony Gucciardi puts it, the “blatant act of transgression” isn’t only obvious to those of us in the natural health world, but to scientists, and food and agricultural advocates around the world as well.

In response to the award (and two other highly questionable World Food Prize awards), 81 Councillors of the World Future Council penned a statement blasting the World Food Prize. These dignitaries are described as “a network of global luminaries who ‘form a voice for the rights of future generations’.” The statement also included names of Laureates of the Right Livelihood Award, or the “Alternative Nobel”. In other words, the statement was written by some esteemed and globally recognized folks—people you don’t necessarily want on your bad side.

In their statement, published in its entirety on Huffington Post, the Council says this year’s World Food Prize recipient “betrays the award’s own mandate to emphasize ‘the importance of a nutritious and sustainable food supply for all people’.” They call out Monsanto Exec Fraley and say he and the other two award recipients played crucial parts in the development of genetically modified organisms which threaten the global food system.

“Almost twenty years after commercialization of the first GMO seeds, by far the most widely used are not engineered to enhance nutrient content, but to produce a specific pesticide or to resist a proprietary herbicide, or a combination of these traits. Even in reducing weeds, the technology is failing, for it has led to herbicide-resistant “super weeds” now appearing on nearly half of American farms,” the Huffington Post reports.

The statement goes on to blast GMOs for perpetuating an unhealthy dependence on fossil fuels and minerals as well as water waste. They point out that although the award is designed to commend those behind nutritious and sustainable food practices, Monsanto’s GMOs actually do the opposite, taxing the environment far more than organically grown crops.