The Dutch national museum said Thursday that one of its prized possessions, a rock supposedly brought back from the moon by U.S. astronauts, is just a piece of petrified wood.

Rijksmuseum spokeswoman Xandra van Gelder, who oversaw the investigation that proved the piece was a fake, said the museum will keep it anyway as a curiosity.

“It’s a good story, with some questions that are still unanswered,” she said. “We can laugh about it.”

The museum acquired the rock after the death of former prime minister Willem Drees in 1988. Drees received it as a private gift on Oct. 9, 1969 from then-U.S. ambassador J. William Middendorf during a visit by the three Apollo 11 astronauts, part of their “Giant Leap” goodwill tour after the first moon landing.

Middendorf, who lives in Rhode Island, told Dutch NOS news that he had gotten it from the U.S. State Department, but couldn’t recall the exact details.

The U.S. Embassy in the Hague said it was investigating the matter.

The museum had vetted the moon rock early on by checking with NASA, Van Gelder said. 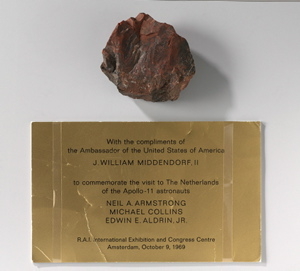 The Dutch national museum says one of its prized possessions, a rock supposedly brought back from the moon by U.S. astronauts, is just a piece of petrified wood. The museum acquired the rock after the death of a former prime minister, who received it in 1969 from the then-U.S. ambassador during a visit by the Apollo 11 astronauts. (AP Photo/Rijksmuseum)
She said the space agency told the museum then that it was possible the country had received a rock: NASA gave moon rocks to more than 100 countries in the early 1970s, but those were from later missions.

“Apparently no one thought to doubt it, since it came from the prime minister’s collection,” Van Gelder said.

The rock is not usually on display; the museum is primarily known for its paintings and other works of fine art by masters such as Rembrandt.

It was on show in 2006 and a space expert informed the museum it was unlikely NASA would have given away any moon rocks three months after Apollo returned to Earth.

Researchers from Amsterdam’s Free University said they could see at a glance the rock was not from the moon.

“It’s a nondescript, pretty-much-worthless stone,” Geologist Frank Beunk said in an article published by the museum.

Marcus Allen - Interview at the Beyond Knowledge Conference (Video)