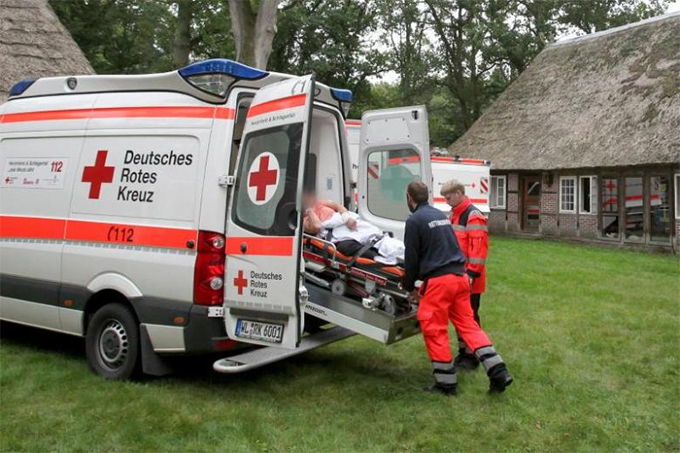 It was reminiscent of a scene from the film The East, a 2013 drama about ecoterrorism. Attending an annual holistic health conference in Handeloh, Germany, 29 practitioners got to experience that dreadful scene in their own mass poisoning. The ubiquitous parallels between actual crimes and Hollywood plots is as absurd as it is scary, just like Hollywood.

The UK Independent blatantly ignored the actual police report by stating the delegates “took” the drug, as in willingly.

"Police are reportedly looking into possibilities including the drug being taken as a joint experiment, or it being furtively given to conference participants as a prank."

The drug unknowingly ingested, AquaRust, only recently banned in Germany, is said to have effects similar to LSD according to the article, yet the doctors and other conference attendants were doubled over with cramps, hallucinating wildly and convulsing. The poisoning required dozens of rescue vehicles and a large emergency staff--the original German article can be generally understood with Google translate.

Oddly lacking from the hype are answers to the most obvious questions, like why would their own medical association also assume the drug was taken intentionally, despite the reports, and then immediately distance themselves from the event, condemning their members accusatorily?

Several articles speak of the “consciousness raising properties” of this drug, further insinuating it would be of interest to a group of quacky holistic types. One “skeptics” site actually refers to the horrific scene as a ‘rave gone wrong.’

The degree to which the comments demonstrate how little is understood about naturopathy is to be expected considering how alternative health care has been demonized in mainstream culture. The "debunking" sites minimize the situation further by admitting it could possibly have been "a prank."

Really? Doubled-over in pain is consciousness-raising? Having to be rushed to hospital is a prank? Naturopaths choose to get high on illegal synthetic chemicals?

These articles and comments more than insinuate the doctors accidentally over-dosed out of general stupidity. If this had been a group of allopathic doctors at a conference this same assumption would not be made.

The crazy conspiracy theorists speculate beyond the narrative and suspect criminal activity. How crazy is that? Could it be they look to history and can easily trace the pattern of an intricate plot to sabotage alternative health care since Chiropractors and Homeopaths and Herbalists first began re-emerging from the closet?

The so-called debunking sites cannot follow basic logic long enough to realize that whether or not the doctors ingested this substance knowingly, which the reports deny, they were still poisoned by a synthetic drug produced by chemists in a lab.

Why would these Holistic practitioners go against their own principles and practices by not taking one of the many natural euphoria and hallucination-inducing drugs, if they were indeed so keen to experiment?

Most likely they would have chosen one of the many natural substances to experiment with if they fancied some conference consciousness-raising—after all, every manufactured chemical concoction initially comes from trying to imitate naturally-occurring substances.

According to the popular recreational drug-reference site Erowid, AquaRust has a vast following among chemical drug enthusiasts and the experience of the drug is actually more similar to a combination of Ecstasy and LSD rather than LSD alone.

Ecstasy and LSD are among the substances experimented with and distributed by the CIA. Ecstasy was invented by the deceased Bohemian Grover Dr. Alexander “Sasha” Shulgin, a world-famous chemist who holds about 17 US pesticide and drug patents. Edgewood Arsenal scheduled his synthetic pot for use as a military weapon.

“According to the memoir of retired Colonel James Ketchum, M.D. Chemical Warfare: Secrets Almost Forgotten (2006), military mind meddlers wanted a nonlethal incapacitating agent that would dissolve the will to resist, and funding for chemical weaponry and mind control was readily available in the early 60s. Other “incapacitating” experimental drugs of the era included LSD, PCP, STP, MDA, DMT, BZ and Ritalin.” (source)

Does this really sound like a substance Holistic practitioners would knowingly ingest?

After all, if it were a psychoactive experience they were interested in, why not choose one of the many natural entheogens available easily over the Internet, some not even illegal, like aminatas, ayahuasca, cacti, mushrooms, kava, or peyote?

The very popular drug “Ecstasy,” while there are now many synthetic versions of the drug, was discovered initially through the main component of the root bark of the common Sassafras tree, safrole, which was deemed “unsafe” by the U.S. Food and Drug Administration as a potential carcinogen based on ridiculous studies in the 1960s. However, vast groves of the tree are grown in Cambodia and other locations expressly to produce the oil once considered highly prized as a “cure-all” by our ancestors and still used to illegally manufacture some versions of “ecstasy” under the general name “Sass.”

If you were a naturopath at a conference looking to get high, which would you choose--to smoke a bit of root bark from a common tree, or to take a mysterious concoction of synthetic chemicals manufactured who knows where and most likely by some of the greatest saboteurs to the field of holistic health?