It's a geological phenomenon that has both authorities and Menominee Township residents scratching their heads. A large crevice, stretching almost two football fields, suddenly appeared in the woods near Birch Creek earlier this week.

"I don't know really. It just looks like a giant crack in the ground," said young spectator and local resident, Ashley Armbrust. "I don't know what happened."

The 150-yard crevice is puzzling local residents. Some areas are up to five feet deep and a few feet across. The ground even rose up several feet in some areas around the crevice, causing trees to lean on both sides. Like the spectators, property owners feel the whole thing is just confusing.

"I told the kids we had an earthquake and they laughed at me, then after they looked at it, they say I don't know," said property owner, Eileen Heider.

It all started early Monday morning between 8 & 9 a.m. Central time, when Eileen and her neighbors heard a loud boom, and that's when Eileen felt her house start to shake.

"I heard something, but I was concentrating more on the chair moving than I was listening," Eileen explained. "It was just moving back and forth, like I had a vibrating chair, which I don't have."

Later on, Eileen told her friend, Doug Salewsky, what happened. On Tuesday, he stumbled upon the crevice a short distance away in the woods and later called the state police.

But what caused this unusual event? An earthquake? A sink hole? Authorities say, at the moment, no one seems to know.

"It's a pretty remarkable sight really," said MSP Trooper, Paul Anderson. "Everyone will speculate I'm sure. There are probably a hundred different opinions out there as to what caused this, but at this time, we don't know what caused this."

The U.S. Geological Survey along with Michigan Tech professors have been called to help "crack" the case. Until then, it remains a mystery.

Earth Crack a Mystery
From: ehextra.com 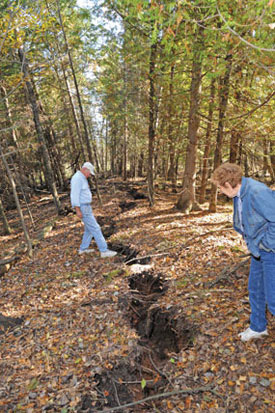 Doug Salewsky and Eileen Heider look at a 200-yard long crack in the earth Tuesday on Birch Creek Road in Menominee County. The crack is 2 to 3 feet wide in some places. The trees in back are tipping about 30 degrees and the earth around the crack has rose about 5 feet with other little fissures spreading out from center.
EagleHerald/Rick Gebhard

One day the land was flat and filled with trees shooting straight into the air. Twenty-four hours later there's a 600-foot-long crack, 4-feet deep twisting its way through the woods - and those vertical trees are now pointed 30 degrees left and right where the earth has mounded 15 feet high. No, it's not a disaster movie; it's what happened Monday at the home of Eileen Heider on Bay de Noc Road in Birch Creek.

Heider was sitting in her recliner watching TV at about 8:30 that morning. "The chair shook for a few seconds and I thought the spring in the chair went," she said. Heider heard a noise at the same time. She checked her chair and around the house inside and out but couldn't find anything unusual.

Heider wasn't alone. A neighbor across the road told her she heard a boom while taking a shower and that her husband was leaning against the washing machine and said he felt it move, even though it wasn't running. Another neighbor said he heard a boom and closed his window thinking it was thunder but then noticed the sky was clear.

The next day Heider's friend, Doug Salewski, found a hole in the ground and a 200-yard crevasse a short ways away which wasn't there before. Heider went to investigate and said the crack was three-feet wide and about five-feet deep in spots.

"The trees on one side are kind of tilted and on the other side are tilted the opposite way," she said. The hole found by her friend was dry so she didn't think it was caused by rain, even though some members of her family did. "My kids and different ones that came over said maybe it was because of so much rain and there was a buildup of pressure underneath."

Heider call authorities and Michigan State Trooper Paul Anderson from the Stephenson Post came out to take a look.

"There's no gas line or anything, I have no answers to it," he said. "It heaved the ground 10 to 15 feet. I mean the ground used to be flat and now it's just heaved, it heaved the entire ground." Anderson said he'd follow up with phone calls to geologists at Michigan Tech.

EagleHerald photographer Rick Gebhard shared the photo you see in today's paper with several government agencies hoping to get a handle on what caused the earth to open up.

Steven Fleegel from the National Oceanic and Atmospheric Administration took a crack solving the mystery. "Unfortunately, that is out of our area of expertise," he said. He recommended contacting the Department of Natural Resources or the U.S. Geological Survey (USGS).

"It appears that what they had in the yard on Rangeline is a sinkhole and that is made by the amount of rain that we got recently," said Wormwood.

Officials also checked the USGS website and did not find any seismic activity in or near Michigan and said that if it was an earthquake more people would have felt it.