Three of us here—myself, Graham Warwick and Guy Norris—concur that the photos show something real. Guy and I have known Steve Douglass for a long time, and know that the reason that he sees (and monitors by radio) unusual things is that he spends time looking for them. Here is Steve’s account of one of his better radio intercepts. This is more than a random image.

The photos tell us more about what the mysterious stranger isn’t than what it is. The size is very hard to determine, for example, although the image size at contrailing height suggests that it is bigger than an X-47B. However, the basic shape—while it resembles Boeing’s Blended Wing Body studies or the Swift Killer Bee/Northrop Grumman Bat unmanned air system—is different from anything known to have flown at full size, lacking the notched trailing edge of Northrop Grumman’s full-size designs.

Read the full article at: sploid.gizmodo.com

Speculation by commenters on the Sploid article point out how similar the shape is to other known, previously secret, crafts:

McDonnell Douglas A-12 Avenger II - The shape is a close match, but the development program was reportedly cancelled in 1991. 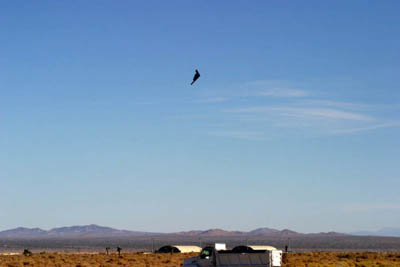 Northrop Grumman B-2 Spirit, Stealth - The profile is not a close match when seen from a distance. 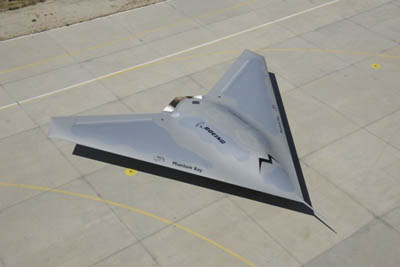 Boeing Phantom Ray - The radio communications revealed it was a manned vehicle, and not a drone.