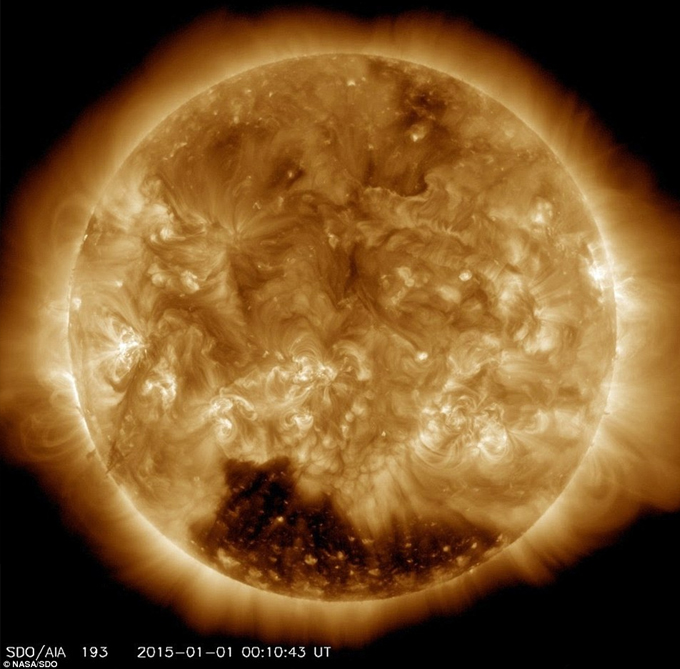 The incredible image was captured on Jan. 1, 2015 by the Atmospheric Imaging Assembly (AIA) instrument on NASA's Solar Dynamics Observatory, shows the coronal hole as a dark region in the south.

Coronal holes are regions of the corona where the magnetic field reaches out into space rather than looping back down onto the surface.

Particles moving along those magnetic fields can leave the sun rather than being trapped near the surface. Those trapped particles can heat up and glow, giving us the lovely AIA images.

In the parts of the corona where the particles leave the sun, the glow is much dimmer and the coronal hole looks dark.

Coronal holes were first seen in images taken by astronauts on board NASA's Skylab space station in 1973 and 1974.

They can be seen for a long time, although the exact shape changes all the time.

The polar coronal hole can remain visible for five years or longer.

Each time a coronal hole rotates by the Earth we can measure the particles flowing out of the hole as a high-speed stream, another source of space weather.

Charged particles in the Earth's radiation belts are accelerated when the high-speed stream runs into the Earth's magnetosphere.

The acceleration of particles in the magnetosphere is studied by NASA's Van Allen Probes mission.

As Solar Cycle 24 fades, the number of flares each day will get smaller, but the coronal holes provide another source of space weather that needs to be understood and predicted.

Coronal holes are a typical feature on the sun, though they appear at different places and with more frequency at different times of the sun's activity cycle.