Nov 6, 2011 Source: dailymail.co.uk
Senior officials cause outrage by suggesting member states should drop their flags in favour of the EU design. UKIP leader Nigel Farage has said this is further evidence of Britain’s identity being trampled.

It has become traditional for David Cameron to appear at European summits in front of both the Union Jack and the EU emblem to illustrate the ‘dual sovereignty’ between London and Brussels.

But now a senior EU official has caused outrage by appearing to suggest that the national flags of member states should be dropped in favour of the EU design of a circle of stars on a blue background.

Christine Roger, the communications director of the European Council, the EU’s governing body, made her comments in a speech to 650 ’spin doctors’ from local authorities across Europe, including the UK. 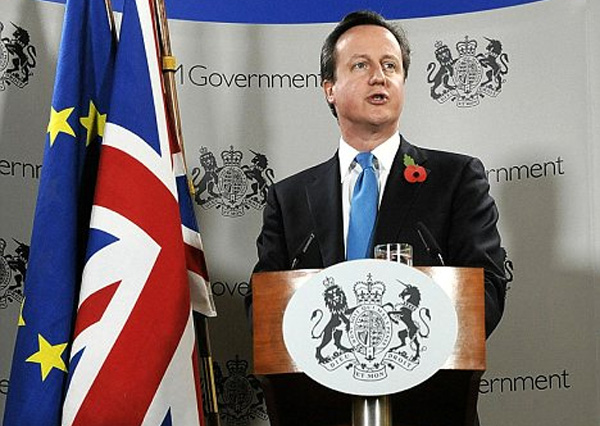 Dual sovereignty: David Cameron frequently speaks in front of both the Union Jack and the EU flag

She called for a new, dedicated public-relations budget to help ‘sell’ the EU as a ‘brand’ to its increasingly disenchanted citizens.

The meeting in Brussels last month, which cost taxpayers across the Continent tens of thousands of pounds, came as EU leaders were fighting to contain the eurozone economic crisis.

In her speech, a copy of which has been seen by The Mail on Sunday, Ms Roger – a veteran Brussels apparatchik – posed a series of leading questions, including how Europe should be defined. ‘Are we talking about a state-to-be? About a federation?’ she asked.

Then, as she flashed up a picture of French President Nicolas Sarkozy standing next to both a French and EU flag, she said: ‘How much do we believe in ourselves? For how long will we see Heads of State with the European flag alongside the national flag? If we don’t believe in ourselves, why should the world outside do so?’ 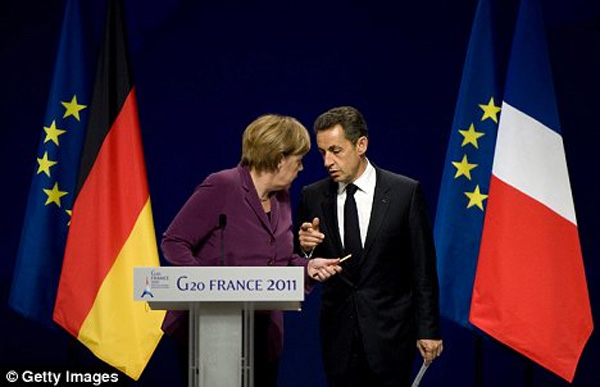 Angela Merkel and Nicolas Sarkozy, with their national flags and the EU’s

Last night, as Eurosceptic politicians accused her of calling for countries to sacrifice their national identity to promote the EU, Ms Roger insisted that she had been misinterpreted.

One of her aides said: ‘What is meant in this presentation is clearly not about national flags. On the contrary, it is part of a discussion on how better to organise the branding and visual identity of the various European institutions and agencies for which there is, at present, no overall brand architecture.

‘The question, “For how long will we see Heads of State with the European flag alongside the national flag?” is meant to underscore the importance of the European brand being clear and simple. In other words the implication is, if it is not, will member states continue to use it?’
In her presentation, Ms Roger also called for more money to be poured into the EU’s image as a ‘single entity’.

She said: ‘If member states do not invest enough in the European brand, a proliferation of sub-brands is sure. Branding contributes to improving Europe’s internal and worldwide reputation as a social and political entity, making Europe’s achievements easy to identify for stakeholders and citizens [and] building a sense of common belonging.’

She called for more money to be ploughed into advertising the benefits of the EU, adding: ‘There is no common funding for a European communication policy.’ She said one should be developed ‘to communicate on European achievements’.

UKIP leader Nigel Farage described the plans as a further example of national identities being trampled. ‘This summit was a disgusting waste of taxpayers’ money, typical of the delusional EU and its staff who see any disaster as an opportunity and think that money grows on trees,’ he said.
‘This organisation has recently voted to increase its budget while hard-working people struggle in a financial crisis.

‘Their choices and priorities are so unwelcome and so unhelpful it’s as if they are having a competition within the EU to see who can be the most stupid.

‘I must say, the competition is looking pretty fierce.’
Local Government Secretary Eric Pickles also entered the row last night, questioning why communications experts from British councils had been sent to the meeting to hear Ms Roger and other experts speak.

‘I don’t think it’s appropriate that taxpayers should foot the bill for a spin doctors’ summit in Brussels,’ said Mr Pickles.

‘I cannot understand what the business case is for councils attending events such as this. During these tough economic times, local authorities should be focusing all their efforts on protecting frontline services.’

A spokesman for the EU Committee of the Regions, which organised the meeting, said: ‘The event brought together communications managers from local, regional, national and EU authorities to share case studies of communication activities aimed at bringing the European Union closer to the citizens.

‘When organising this event we made great efforts to keep the costs down and achieve the best possible impact with very limited resources.
‘The total cost amounted to around €50,000 [£43,000] for a two-day event bringing together 75 speakers and 650 participants.’