Jan 25, 2012 Source: freemasonsfordummies.blogspot.com
Ed comment: This story has been unfolding throughout 2011, we’re just now picking it up. 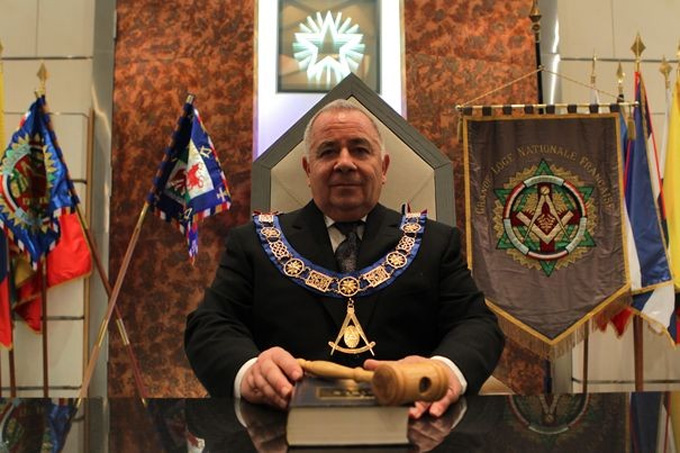 The Grande Loge Nationale Française continues to make the news in France, and they seem to be heading for a very ugly and very public implosion. At the heart of the troubles is Grand Master François Stifani. An internal battle has raged against Stifani and his actions and policies for over a year, and now, foreign grand lodges are stepping into the fracas.

The GLNF is one of the three principal Masonic grand lodges at work in France, and is the one most recognized as regular by the majority of the world’s Freemasons, including US and Canadian grand lodges, and the United Grand Lodge of England. 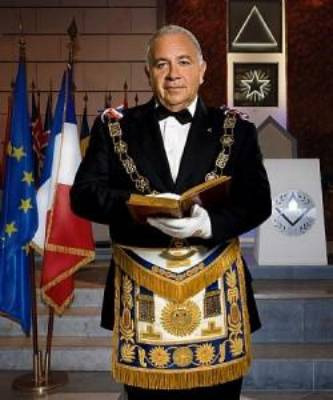 Grand Master Stifani has enraged GLNF members by exposing Masonic ritual openly on national television, by embracing brutal African leaders as Masonic brothers (Ed comment: So has Obama!), by promoting membership increases over the quality of initiation, by failing to have the GLNF’s books independently audited, and most of all, by officially cozying up to the President and ruling political party of France. At the grand session last January, many brethren stormed out in protest of Stifani, and several lodges in the Loire Valley have had their charters revoked by the GM.

An 850 square foot Paris apartment costing €2.5 million (US$3.3 million) was recently purchased as a "venue more suitable and consistent with the current status of the grand lodge." Stifani said the new digs, several blocks away from the Grand Lodge’s very large and modern multi-story building on Paris’ north side in the 17th Arrondissement, were needed to receive "major players in civil society, politicians, intellectuals or religious, to the benefit of the reputation of our house."

The most recent furor revolves around an official letter, sent on GLNF stationary a year ago, and with the Grand Master’s signature, pledging support of the Grand Lodge to French President Nicolas Sarkozy. Blatant political dabbling has long been the activity of the irregular, largely unrecognized, and Left wing Grand Orient de France, which has often taken public stands on political issues and government policies. But the more Right wing GLNF has historically steered clear of such political activity, until now. The letter was made public and published in L’Express Magazine.

Members have resorted to the civil court system, and on December 7th, 2010, a Paris High Court demanded the GLNF’s General Assembly be convened to consider removing Stifani. Stifani remains defiant—the Grand Master also serves as president of the governing board, and his public position is that he can be removed as president, but remain as Grand Master.

In the meantime, grand lodges in Belgium, Switzerland and Luxembourg have fired off official letters of complaint to the GLNF and Stifani, protesting his supportive communication to President Sarkozy as being in violation of the most basic tenets of Freemasonry. Stifani shrugged off those contacts, but on December 9th, the United Grand Lodge of England also weighed in with an official message of protest, saying it "clearly offends against one of the basic principles of Freemasonry—that a Mason acting in his Masonic capacity does not make any comment on state of social policy, or which could be construed as allying himself or his Grand Lodge with a particular political party or faction. . . If the letter is genuine, it could seriously affect the close relations that have always existed between the United Grand Lodge of England and the Grand Masters of your Grand Lodge." 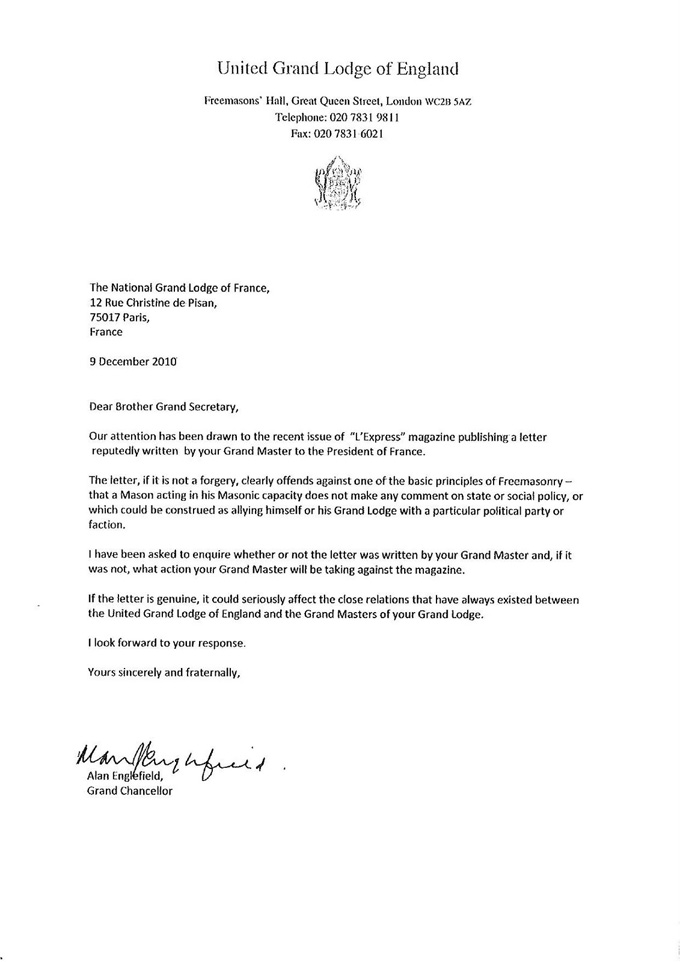 Such a strongly worded official commentary on a foreign grand lodge jurisdiction is rare in the regular Masonic world. But the battles in the GLNF have been splashed across the web, newspapers, magazines, TV, and courtrooms, and dozens of lodges and hundreds of GLNF Masons are in turmoil.

The wrinkle in the story is that Stifani contends that the letter supposedly sent to Sarkozy pledging the political support of the GLNF was a forgery. Yes, it was sent on GLNF stationary, and yes it had Stifani’s signature, but he contends the letter is a forgery, the stationary was stolen, and his signature was attached from an electronic file without his approval. Somewhat belatedly, he has filed a police report to that effect.

The drama continues to be played out across the internet, and in a very public blog about Freemasonry in France by L’Express Magazine’s reporter Francois Koch.

Annual Meeting of the GLNF. Brothers Shout "Resign" at the Grand Master:

The brothers shouted "Resign!" and "Thug!" at the address of the Grand Master François Stifani at the Annual Meeting of the Grande Loge Nationale Française (GLNF). It was this afternoon, in Levallois-Perret. Due to demonstration by opponents of Francois Stifani outside the main entrance, the few foreign delegations [in attendance] came into the room through another door.

Only 1200 delegates attended the meeting in an room set up for 3000. According to the accounts I have received, about two-thirds of the participants shouted "Resign!" and "Thug!" to the Grand Master. So, Francois Stifani was hardly able to speak, in this meeting, which lasted two and a half hours. The witnesses refer to a "climate of insurrection." It was like the Annual Communication of March 2010. Except that this was a ritual meeting, where order is supposed to reign. The reports were jeered. And it did not proceed to any vote.

Video and text from: freemasonsfordummies.blogspot.com

Recognition of GLNF Suspended Across Europe

As expected after a meeting earlier in the month in Kiev, an official joint statement was issued by five European Grand Lodges on May 18th, regarding withdrawal of recognition of the Grande Loge Nationale Française.

Since its founding in 1913 the National Grand Lodge of France (GLNF) has been the stronghold and warrant of Masonic regularity in France.

The GLNF, and its members, have always observed the rules and obligations of regularity. Unfortunately, since October 2009, this grand lodge has increasingly been disrupted by discord and disharmony. It is regrettable that under the current leadership these internal quarrels have led to law suits in the civil courts of Paris.

These civil actions have resulted into two facts:

1) the day – to – day governance of the GLNF is now in the hands of a court appointed “ad hoc administrator”, and

2) the internal problems of the GLNF have been widely covered in the national and local press in France.

In addition, the various groups within the GLNF have been airing their differences in public, often using an excessive, un-masonic and - at times - libellous language.

These events and the ensuing institutional turmoil, are not only bringing the GLNF but also regular Freemasonry itself into disrepute.

For the sake of regular Freemasonry and in order to protect our Grand Lodges, we, the Grand Masters signing this declaration, therefore distance ourselves from the events within the GNLF.

Moreover, we have agreed to initiate within our Grand Lodges and according to the provisions of our respective statutes and by-laws, the procedures leading to the suspension of our recognition of the GLNF.

We all wish and hope that harmony, peace and concord can be restored in order to allow the Brethren of the GLNF to live once again according to the Principles and Values of universal Freemasonry.

Brussels, Berlin, Luxembourg, Vienna, Lausanne, the 18th of May 2011

Though not listed in this joint declaration, the Grand Lodge of Poland has also withdrawn recognition from GLNF.

The other shoe that hasn’t dropped—yet—is the question of whether the United Grand Lodge of England will also yank recognition. According to the LML in English blog, "Rumours suggest that the UGLE will meet and announce its own position on June 20th, 4 days prior to the court decision on the GLNF appeal. LML in English is attempting to obtain additional information, including the attitude of the Grand Lodges of Scotland and Ireland."

If that happens, who will assume the new position of regular, recognized Freemasonry in France? A new group that has split from the GLNF, a newly reorganized GLNF leadership (if they can ever manage to kick GM Stifani into the alley and hold a legal election), or perhaps even the Grande Loge de France?

Meanwhile, Stifani continues to whistle in the graveyard, issuing firings, suspensions or expulsions on a weekly basis (last week his own Grand Secretary resigned).