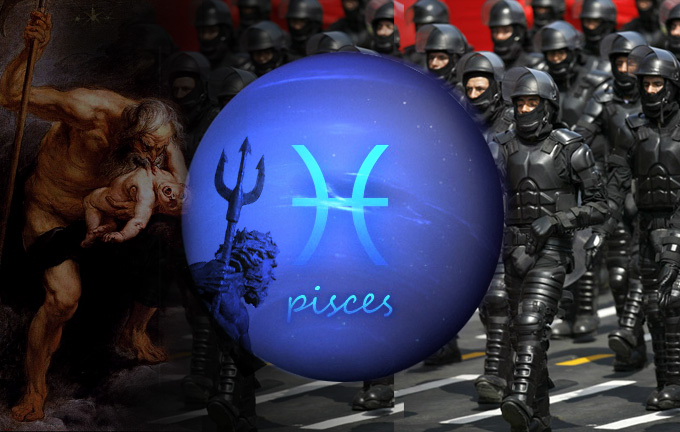 The planet Neptune will be in the sign of Pisces from February 3, 2012 to 2025. Neptune takes about 164 years to make a complete cycle, spending about thirteen years in each sign. Neptune is considered the modern day ruler of the planet Pisces so it will have truly come home after its long journey around the Zodiac.

Neptune was a son of Rhea, the earth mother, and Saturn, the prevailing sky god who ruled over the rest of the Roman pantheon. Fearing that his children would one day usurp him, Neptune was swallowed by his father immediately after his birth, as were the rest of his brothers and sisters. He was eventually saved by his mother, who tricked Saturn by offering him a large stone wrapped in swaddling clothes in place of her sixth child, Jupiter. Saturn was forced to vomit up Neptune and the rest of his siblings in the process of ridding the stone from his digestive system. In alternative versions, Neptune was thrown into the sea by his father as soon as he was born. Either way, Neptune went on to play a key role in assisting Jupiter in usurping Saturn and the rest of the Titans. After Saturn’s defeat, the three brothers Jupiter, Pluto and Neptune divided up the universe among themselves, assuming jurisdiction over the sky, the underworld and the sea, respectively. One interpretation can be summarized: Saturn (esoterically associated with man’s limitations, restrictions, death, decay and time) cannot prevail against Neptune (symbolic of water, consciousness, spirit and transcendence).

The energy of Neptune is very slow and nebulous. It can shroud us in mystery, heighten our spiritual awareness or drive us to the depths of despair. The energy of Neptune is very difficult to understand or grasp unlike the other planets. As it is far away from the earth, its energy takes time to reach the earth or it gets dissipated on the way according to Astrologers. However, its effects are generational, long term. Therefore, babies being born during this period may grow up to usher in the “new age” (not necessarily for the good though).

Neptune rules Pisces, therefore retains all the qualities and characteristics of that sign. Pisceans are very concerned about the problems of the world; they feel that it is a personal duty to make the universe a better place. On the positive side, Pisceans are imaginative, sensitive, compassionate, kind, selfless, unworldly, intuitive and sympathetic. On the negative side, they are escapist, idealistic, secretive, vague, weak-willed and easily led.

Neptune governs hospitals, prisons, mental institutions, military and any place, such as a monastery, that involves a retreat from society. Its appearance coincided with the discovery of anesthetics and hypnotism. Neptune is also related to viruses, epidemics and bacteriology.

Neptune in Pisces also represents nature in its raw form, before human intervention, and includes the wild — the jungles and natural resources — as well as natural events.

During its last stay in Pisces from 1847-1861, in political terms Neptune was linked to the rise of nationalist movements throughout Europe in countries like Germany, Italy, Hungary, Ireland and Serbia, seeking independence for their nations inspired by an idealized past of legend. It was also linked to the rise of socialism and the beginnings of the welfare state. Slavery in America was also abolished. Neptune coincided with the utopian ideals of Communism, when Marx and Engels first published ’The Communist Manifesto’ in 1848 and and in 1859 Charles Darwin published the Origin of the Species. Pioneer spiritualists also thrived. In Victorian England opium use was acceptable and legal. The Pre Raphaelite Brotherhood, was formed in 1848 and existed until 1860, almost exactly mirroring Neptune’s previous journey through Pisces.

During the next 13 years, we’ll definitely see political systems representing “a perfect society” being strived for and we will see reforms in health care (and medicine), prison systems and the arts. It seems this is the ripe time for globalists to push forward their agendas. Of course, there is always the flip side. It would also be a time to see individual sovereignty prevail, clean technologies released, more impactful music and film (less Hollywood shite), natural cures, an overall deeper awakening to the natural world and the ability to do as you will and go un-noticed.

Adding all these up, you can probably guess considering the current state of our world, things can go either really good or really bad during the next 13 years. Either we’ll believe a lie and become easily led into the murky water of our demise or we’ll utilize these influences to truly enlighten ourselves so we can break the spell holding us hostage in an artificial world. The time for new ideology is here but what way will it go?

Einstein, a famous Pisces said, “As the circle of light increases, so does the circumference of darkness around it.”